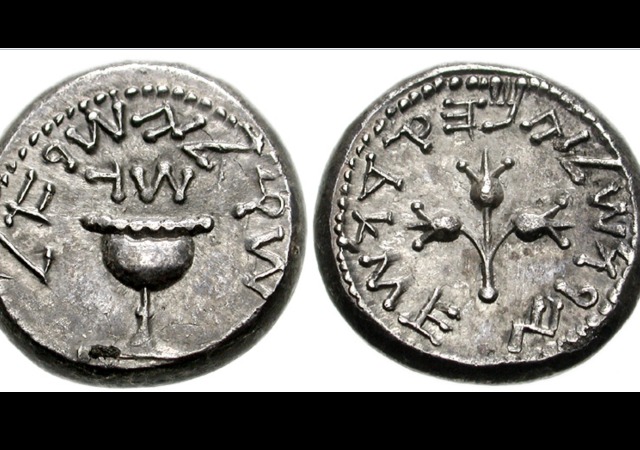 Hallel Halevy, 8, picked up a gray coin on the way home from picking up her sister from school last May. She searched on the internet for ancient coins, found a similar match, and put it in her treasure box.

She didn’t realize what she had until her 11-year-old sister looked at it and their father sent a picture to a friend. From The Times of Israel:

“I recognized that it may be a genuine ancient coin,” said father Shimon, a lawyer. But lacking the proper education to confirm it, he took a picture on his cell phone and sent it to the wife of a local scholar, Bar-Ilan University Prof. Zohar Amar.

Amar, a historian of ancient Land of Israel flora and fauna, had actually written an essay on the wine presses in the nearby archaeological site, Chubalta, near which the coin was found. Amar was intrigued by what he saw and asked Shimon to bring the coin to his house so he and his wife, Tamar, who is also knowledgable on such subjects, could study it.
At first glance, the Amar couple thought it was a rare full shekel coin, minted by Jews during the Great Jewish Revolt against the Romans prior to the destruction of the Second Temple. They were partly right.

The couple compared it to several examples of shekels, but decided to test its authenticity by weighing it. Disappointed, they found that it wasn’t the expected 14 grams, rather exactly half of it. Then they realized that meant it was instead a half-shekel coin, which was used for Temple purposes.

Amar believes the coin was minted during the Great Jewish Revolt sometime during the years 66-70 CE. More precisely dating it may be tricky, however, because only one side is clearly legible. The other could have been un-minted, or was rubbed off with age. On the visible side is is an image of a three-pronged pomegranate, around which is written “Holy Jerusalem” in First Temple Hebrew lettering.

A comparison with examples of half-shekel coins found in the book, “A Treasury of Jewish Coins” by renowned expert Yaakov Meshorer, indicates that the coin is not from the first year of the Revolt because the words “Holy Jerusalem” are written in “full form” — with the letters “yud” and “vav.”

Interestingly, the use of such First Temple period lettering, known during the Second Temple period, but was not typical of it, is thought to have been intentional to raise nostalgic feelings for the earlier Jewish monarchy. (A modern comparison could be the use of old Gutenberg Bible fonts on antique shops.) During the surge of Jewish nationalism at the end of the Second Temple period, in addition to these shekel coins, a small portion of the biblical Dead Sea Scrolls from Qumran were written in this font, and recently a non-biblical scroll was discovered in this type as well.

“This half-shekel tax for the sanctuary, mentioned in the Book of Exodus (30:13–15), required every male to pay half a shekel to the Holy Temple once a year,” said Dvira. The half shekel donation was not only a means of filling Temple coffers, but was also used as a census as during the Second Temple; every Jewish male paid his tax once a year on the first of the Hebrew month of Adar. (In the New Testament’s Book of Matthew, Jesus, who lived circa 4 BCE-33 CE, is reported to pay the Temple tax through the miraculous discovery of coinage in the mouth of a recently caught fish.)

every Jewish male paid his tax once a year on the first of the Hebrew month of Adar.

Nope. It wasn’t even possible to pay on the 1st. The 1st was when notices were published to remind people that the tax was coming up, so they’d have time to put the money together. The collection offices opened for business on the 15th, and enforcement began on the 25th.