The program would be “far more advanced.” 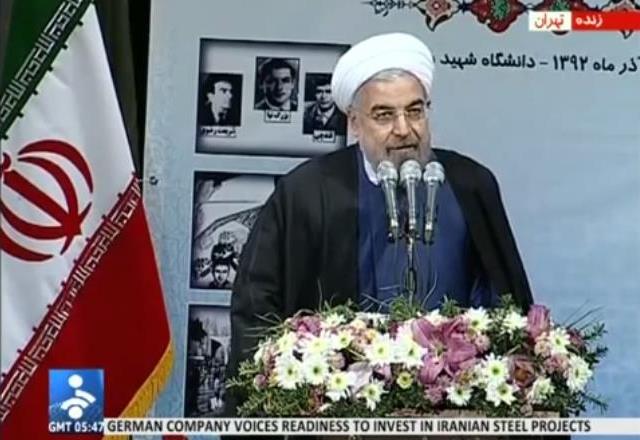 Did anyone honestly think Iran would not try to find a way to restart its nuclear program? Iranian President Hassan Rouhani threatened that the country would restart the program if the U.S. imposes more sanctions. From The New York Times:

Mr. Rouhani said that a reconstituted nuclear program would be “far more advanced,” a veiled threat that the country could start enriching uranium up to the level of 20 percent, a step toward building a nuclear weapon. Such enrichment activities were a major concern before 2015, when Tehran signed a landmark agreement with the United States and other world powers that lifted crippling economic sanctions in return for severe limits on Iran’s nuclear activities.

President Trump has repeatedly called the nuclear deal a “disaster,” said that he believes the Iranians are violating its terms, and twice called for reviews, in hopes of finding reasons to kill it.

Last month, the U.S. imposed more sanctions on Iran due to the country’s ballistic missile program, which included “mandatory penalties on” those involved in the program “and anyone who does business with them.” It also applied “terrorism sanctions to the country’s Revolutionary Guards.”

Iran immediately lashed out at the sanctions:

“It’s ultimately an effort to weaken the nuclear deal” but, “we will continue with full power our missile programme,” Bahram Ghasemi, Iran’s foreign ministry spokesman, said on Saturday (29 July) — a day after the US announced a new set of sanctions targeting Tehran’s missile programme.

“The military and missile fields […] are our domestic policies and others have no right to intervene or comment on them,” Ghasemi added.

The regime kept its promise. Parliament voted to spend more money on the ballistic missile program. It will not back down:

If Washington continues with “threats and sanctions” against Iran, Tehran could easily step up its nuclear activities, Rouhani said in parliament Tuesday.

“In an hour and a day, Iran could return to a more advanced (nuclear) level than at the beginning of the negotiations” that preceded the 2015 deal, Rouhani said, though he underlined that Iran’s preference is to remain in the accord.

It’s not only Rouhani that has dropped hints of restarting a nuclear program:

Ali Akbar Salehi, president of the Atomic Energy Organization of Iran, said the country could go up to 20 percent enrichment to “surprise the Americans and their supporters.”

Such enrichment by Iran would be a violation of the nuclear agreement, known officially as the Joint Comprehensive Plan of Action, which requires that Iran limit uranium enrichment to 3.67 percent, the level typical for fueling nuclear power reactors.

Why not? They got everything they wanted up front.

I doubt that Iran’s nuke program is stopped now. It was ridiculous of Kerry to do his best Baghdad Bob impression while aggrandizing his Nuke Deal as the Iranian govt. herds 1000s into the town squares to chant Death to the USA as they do weekly and at least twice a week during Ramadan.

Go for it. The response to hostile progressions will be fast and furious…. wait a second.

“Re-start”? How do you restart something that never stopped?

After all, there was no enforcement mechanism, so there was no reason for Iran to do anything to curtail their ambitions.

Did anyone honestly think Iran would not try to find a way to restart its nuclear program?

Did anyone honestly think that it ever stopped?

These Iranian statements sure sound like admissions that the Iranian nuclear program was never stopped at all. Otherwise, how could it “restart” at a more advanced level? Atomic physics isn’t one of those things where you can just skip a few steps.

Fool me once, shame on you. Fool me twice, shame on me. Fool me 1647 times, simply shoot me. Because I am TDSTL [Too Darn Stupid Too Live].

Hey Iran! Stuff it and Blow it Up!