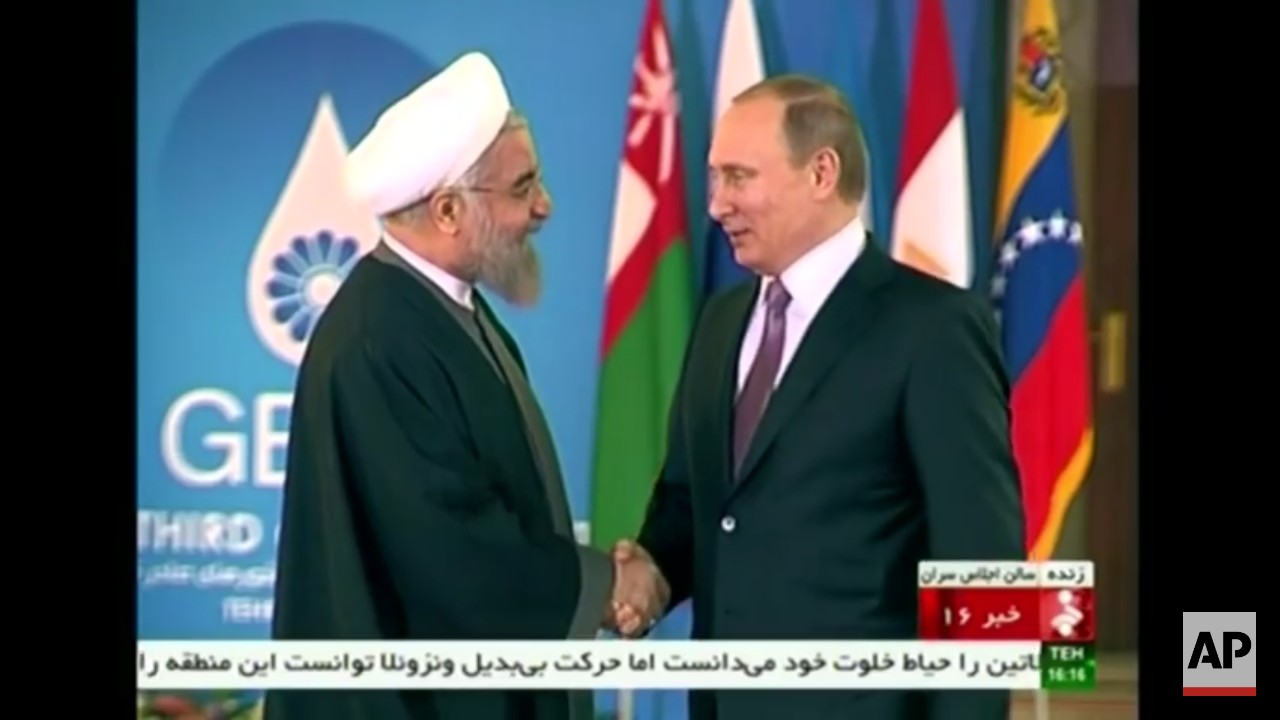 In what could be one of the most serious violations of the Iran Nuclear Deal so far, Russia may be involved in secret weapons deals with Tehran. The allegations were made by the German newspaper Die Welt, citing Western intelligence agencies — often a shorthand for Germany’s foreign intelligence agency Bundesnachrichtendienst (BND).

Die Welt, Germany’s most-read newspaper, published a satellite image showing Iranian military aircraft on the Russian airbase located inside the Syrian territories currently under the control of the Assad Regime. According to the newspaper, intelligence sources have confirmed the existence of a “new smuggling route between Russia and Iran” that runs through Assad-held Syria. On two occasions, Iranian planes delivered military equipment to the Russian airbase that was reportedly shipped to Russia for maintenance purposes.

Under the terms of the Obama-backed Iran Nuclear Deal Framework announced in April 2015, to which Russia is also a signee, all UN member states are forbidden from supplying duel-use, and offensive military hardware or technology to Tehran. Military deals with the Islamic Republic must first be examined by the United Nations Security Council to prevent Iran from upgrading its ballistic missiles program or boost its offensive military capabilities. These restrictions also apply to the maintenance of Iran’s existing weapons systems.

Going by the evidence published by the German daily, Iran’s underhand military dealings with Russia are a clear violation of the Nuclear Deal that gave Tehran access to billions in frozen assets and boosted country’s oil revenues. German newspaper Die Welt reported:

Russia and Iran are violating the UN Resolution 2231 that prohibits the delivery of heavy and offensive weapon systems. This was revealed by the Welt am Sonntag [Die Welt‘s Sunday edition], citing Western intelligence agencies. In June, aircrafts flew twice from Iran to Khmeimim airport, the most important Russian military base in Syria, in order to bring military supplies that were destined for further transport to Russia — the reports says. The military equipment was then carried on trucks to the Mediterranean port of Tarsus, and loaded on board the Russian ship Sparta III. After couple of days, the ship sailed to Russian port of Novorossyisk on the Black Sea.

Russia and Iran have thus violated the Resolution 2231 of the UN Security council. The resolution [passed in] June 15, which replaced existing sanctions and resolutions [against Tehran] as part of the framework of the Nuclear Deal with Iran, obliges [UN] member states — in appendix B, paragraph 5 — to disclose certain weapon deals with Iran to the Security Council till 2023. Thus “supply, sale or transfer [of] … all type of battle tanks, high calibre artillery, fighter planes, attack helicopters, war ships, rockets or rocket systems” require an approval of the UN. This ban also covers the “manufacture or maintenance” of these weapon types. [Translation by Author]

Screenshot of the report published in DIE WELT showing the satellite image of an Iranian aircraft on the Khmeimim airfield in Syria: 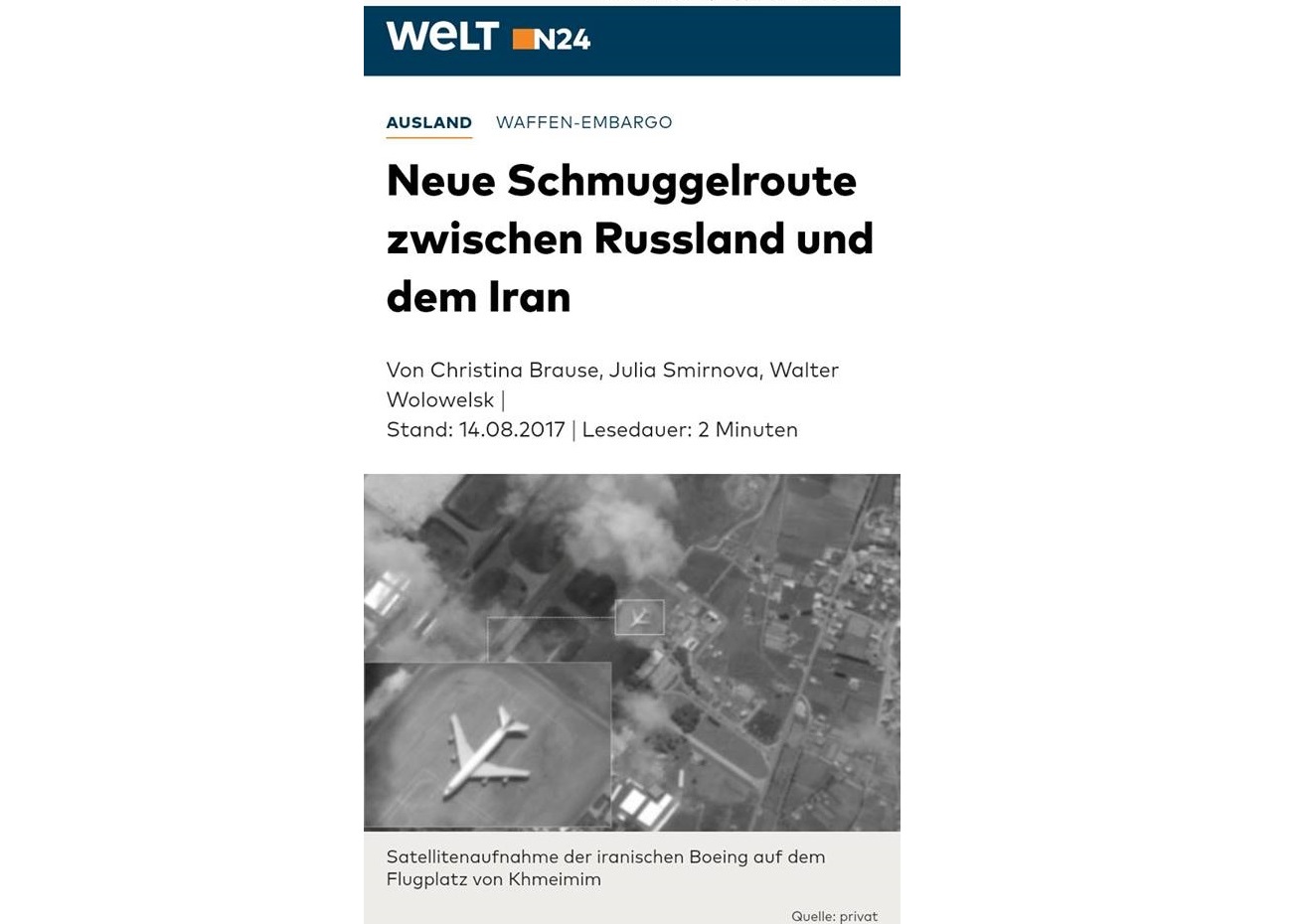 “The Welt am Sonntag report, citing Western intelligence officials, should trigger an immediate investigation by the UN and Western powers who negotiated the woefully inadequate Iran nuclear deal.” Benjamin Weinthal, the noted Middle-East expert and research fellow for the Foundation for Defense of Democracies (FDD), told Legal Insurrection. “Russia was used as a country by Iran’s regime to circumvent nuclear and weapons sanctions prior to the Iran nuclear deal in 2015. And given the intense Russia-Iranian military partnership in Syria to wipe out all moderate opposition to Assad, the Welt am Sonntag‘s findings mesh with the nefarious activities of both Putin and Iran’s radical clerical leadership.”

Despite the bombshell revelations by the leading German daily, The New York Times again came to the defense of its favourite deal. In its yesterday’s editorial the paper wrote, “Trump is recklessly trying to do by pressing his administration to declare, with absolutely no evidence, that Iran is in violation of the terms.” For the New York Times, an Iranian aircraft loaded with military hardware sitting on a Russian airbases counts as “absolutely no evidence”.

With Obama-Kerry Nuclear Deal in place, Tehran is free to enrich uranium in its nuclear facilities and fine tune its long-range ballistic missiles. The deal freed $100 billion of previously frozen assets, and gave Iran access to international banking system. European countries such as Germany, France and Italy have since signed lucrative oil deals to the tune of tens of billions of dollars.

The New York Times complained in its yesterday’s editorial that “[critics] ignore the fact that the deal is working”.  And this one time, I agree with NYT, for the Iranian Mullahs eying a nuclear arsenal, the deal is working very well.

Didn’t Tillerson just certify that Iran is in compliance with the deal? A German newspaper has better intel than our State Dept?

I would not be surprised if Putin starts pumping Lil Kim to destabilize the situation with NK.

if the Iranians are violating the deal and their proof than by all means call it out. But Trump will have to actually say something bad about Putin.

My long years of experience with Germany tell me that if the German press is accusing someone, in this case Russia, of selling illegally to Iran, it is probably the Germans themselves who are doing it. The only surprise is that they didn’t accuse the US, since that is their SOP.

If I remember correctly, the Stuxnet worm infected Siemens equipment. So yeah, the Germans have their grubby little mitts in this middle of all of this.

Is Russia a signatory to the Obama pact?

Meanwhile, in the civilized world…

‘France gets the oil & Italy gets the boats!’ Italian MPs FURIOUS at EU double standards

Shades of South Africa, Serbia, and Ukraine too.

And more than 2,300 have died while trying to attempt the perilous crossing.

Iran is violating the deal?! Never saw that one coming…

All you could ever hope to do is to slow them down. In case you didn’t notice, the genie came out of the bottle in 1945. The secret was never how to build it. The secret was whether it could be built. Well, BOOM.

“The secret was never how to build it.”

It most certainly was a secret, but a bunch of Commie-sucking traitors thought it was a good idea to share the knowledge.

Believe that if you wish. There were traitors, but the secret wasn’t so secret once a bomb was detonated.

If you don’t understand that, I suspect you don’t know much. We didn’t even test the uranium bomb design before we dropped it on Hiroshima. All they did was take two sub-critical parts and push them together.

BTW, the Russians built a practical Hydrogen bomb before we did. They figured out neutron compression while we were still building one the size of a multi-story building.

The Russians didn’t need to steal the methods for enriching uranium or making heavy water. The Germans were doing it during the war.

If the Russians and everybody else knew how to do it, why didn’t they beat us to the punch? Why did it take them another four years after we did? Not that wikipedia is always a great source, but you could begin your education here:

@Paul You have a problem with reading comprehension.

You have a problem of not knowing when to cut your losses after repeatedly getting your ass handed to you in a debate.

It would be a terrible shame if an F-22 were to happen to slide up below one of these Iranian cargo aircraft and put a few high-explosive rounds into an engine or two. Tsk, tsk. Tragedy, even.

On a more serious and practical note, Iran is sending material TO Russia? Isn’t that like Coals to Newcastle or other such oddness?

I blame this all on Obama and Hillary.

That’s my opinion and I’m sticking to it.