“the job shortage won’t go away any time soon”

Schools are churning out doctoral graduates but the job pool isn’t strong enough to support so many people. As a wise man once said, something that can’t go on forever, won’t.

Many new Ph.D.s in humanities disciplines report that they struggle to find academic jobs, and that many of the positions they find available are off the tenure track.

Data released Sunday night by the American Academy of Arts and Sciences show that these anecdotes reflect realities in a wide range of humanities disciplines. And the data show that Ph.D. production in these fields is up, suggesting that the job shortage won’t go away any time soon.

The data are part of the academy’s Humanities Indicators Project, which is regularly updated with new analyses — many of which alarm academics in the humanities, even as they applaud the availability of the data.

Those Entering the Job Market

The long period of time it takes to earn humanities doctorates (8-10 year time-to-completions are not uncommon) means that prospective graduate students must take a long view in terms of thinking about likely job prospects when they finish. But the steady increases in Ph.D. completions since 2007 cover a period of sharp job cuts when the economic downturn started in 2008, slight improvements a few years later (but not to pre-downturn levels) and more reductions in positions since then.

Chart by Inside Higher Ed: 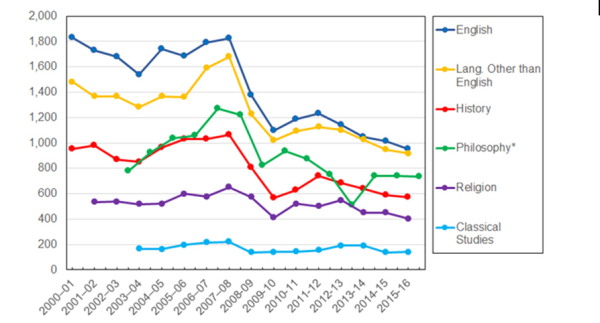 Nope not even that job will be available. The kiosks will handle that job.
With a brand new doctorate, maybe a university will hire…they all need janitors, and ground maintenance staff.