Elitist attitude behind #Calexit is how we got Trump

Elitist attitude behind #Calexit is how we got Trump

“If everyone in the middle class is leaving [California], that’s actually a good thing.” 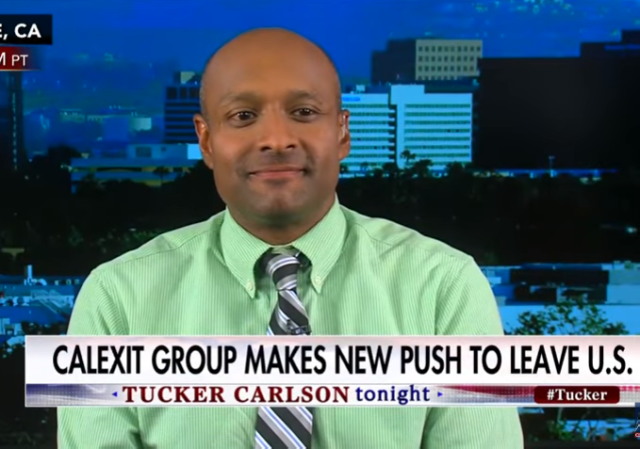 In the case of Brexit, ordinary British citizens defied the elites in Brussels who thought they know what’s best for the British people. Calexit is the opposite. Proponents of Calexit are elitists who are angry that Americans elected Trump and they want a divorce. Let’s give it to them.

The initiative has a chance to appear on the 2018 ballot, as my colleague Leslie Eastman pointed out in her recent post: #CalExit is resurrected as measure approved for signature gathering

Shattuck: #CALEXIT would be a truly golden idea

California could secede from the United States. Signatures are being hurriedly gathered for a 2018 ballot initiative that would begin the process of independence for the Golden State.

Awesome. Break a leg. I wholeheartedly endorse “#Calexit” and here’s why you should too.

About a third of the entire welfare population of the United States lives in California. Let’s make that the Independent Country of California’s problem, not ours.

An estimated 2,350,000 illegal immigrants (about the population of Connecticut) reside there too. In the new California they can all be legalized and won’t have to dwell “in the shadows.”

Taxes in the state are astronomical and yet the fleecing of the battered upper middle class has failed to keep roads and bridges from crumbling, or the K-12 schools from performing dismally. I’d look for an eastern wall to keep the remaining affluent within the borders.

When we shed California, we’ll be saying goodbye to state with the most murders per year.

We won’t miss anything about California. Do you know anybody whose favorite pizza is at California Pizza Kitchen?

Think about it. If California was its own country, there would finally be a place for progressives who are embarrassed to live in America. They can run it how ever they want and the rest of us can enjoy life in the U.S, without them.

The Calexit movement is also a perfect example of how we got Trump. It was middle class Americans in the midwest and elsewhere in the U.S. who felt abandoned by DC elitists and saw in Trump a candidate who listened to them. Democrats have shown no interest in winning back these voters.

In fact, a leader of the Calexit movement appeared on the Tucker Carlson show this week and said that he’s happy about middle class citizens who are fleeing California for other states.

Calexit Leader to Tucker Carlson: Export Middle Class To Make Room For Next “Wave” Of Immigrants

Calexit leader Shankar Singam appeared on Tuesday’s broadcast of Tucker Carlson Tonight to promote the secession of California from the union. Singam said California doesn’t have much in common with the rest of the country. He declared, “This is California. We’re not the United States.”

The Calexit proponent also said it is a “good thing” that the middle class is fleeing the state because it will make room for the “new wave” of immigrants. Singam told Carlson that “the United States” should be thanking “us” for “exporting” the state’s middle class to the rest of the country.

“If everyone in the middle class is leaving, that’s actually a good thing. We need these spots opened up for the new wave of immigrants to come up. It’s what we do,” Singam told Carlson…

“That’s the first time I’ve heard that,” Carlson said. “It’s basically the economy of Mexico. You’ve got a small number of rich people, the tech people, and then you’ve got a ton of poor people and the middle class is leaving. That’s a recipe for instability. You’re aware of that, right?”

“If everyone in the middle class is leaving, that’s actually a good thing. We need these spots opened up for the new wave of immigrants to come up. It’s what we do. We export our middle class to the United States. You guys should be thanking us for that,” Singam said to a stunned Carlson.

Again, this is how we got Trump. Let progressives have California. They can ban guns, flood their country with as many refugees and illegal immigrants as they please. They can also forfeit every penny of federal assistance they currently enjoy, along with their 55 electoral college votes.

Can we pick which pars of California they get – keep the central valley and the state of Jefferson, oust the coastal enclaves?

We keep the ports, as central to national defense and commerce. We keep the Federal Land unless compensated. Military bases remain property of the US.

It’s all so stupid, b/c a state just can’t vote themselves out. And I guarantee, if this picks up steam, Oregon and Washington and Hawaii would likely want to bust off with California. Huge mess.

Federally-owned land and defense installations would be the big sticking point, yes.

The devil is in the details. Instead of keeping “preferred” areas, it would make more sense to give those who prefer to remain US citizens an amount of time (1 year?)

Another question I have: how much tax revenue do the Feds get every year from Silicon Valley businesses?

I suspect this would be a net bad idea for California, and also suspect that -assuming it got on the ballot- most voters in that state would also decide it was a bad idea before voting day.

As for the bases and military installations:

A treaty between the U.S.A. and California, mutual defense treaty, with us keeping the bases.

Just as we do with so many other countries.

Wanna bet Oregon and Washington choose to joint California and lock up the West Coast?

Wanna bet on their chance of success?

Here’s the problem: anyone choosing to live in California will want dual citizenship here, and our squishes on the right will give it to them.

Soon as California goes belly up, time to move back in with mom and dad, and demand we take care of them.

Not so easy. It will just be called “foreign aid” and we’ll still be stuck paying it.

Oh they can take California – except for the 45% of the state that is Federal Land, the ports, the military bases and the National Laboratories. Oh, and Silicon Valley. They can’t take that either, at least not without HUGE exit fees on the part of the companies.

They also need to remember that the USA owns the dams that supply much of their water and electricity, the part that isn’t imported from other states. They don’t get that, nor do the agreements that send water and electricity to California remain valid. They’re going to have to pay through the nose for it.

And then there are the highways. The Interstates are owned and maintained by We The People of the USA. They’re going to have to pony up in a big way in order to drive on them.

And speaking of driving, they might have problems getting oil for the refinery or cars. Especially cars. Those would have to be subject to big export fees.

“Oh they can take California – except for the 45% of the state that is Federal Land, the ports, the military bases and the National Laboratories.”

Maybe Democrats will repeat what they did at Ft. Sumter.

Because that worked out so well for them the last time.

Wouldn’t work. They’d be too busy seizing each others illegal guns and “high-capacity” magazines.

Insanity is so logical for them.

Not all of us in CA are liberal and out of touch with reality. But it can be a lonely place for rational thinking.

Should this go anywhere, I recommend that conservatives take the following approach:

Agree to go along provided California consents to creating one or more new states for anybody who doesn’t want to leave the USA.

Pocket this concession up front, and create a new state of Sierra, consisting of the Central Valley, the Sierras, and the Northern mountains.

No, it’s definitely not a win-win. We don’t want TWO Mexicos on our borders, flooding the rest of the country with illegals. Because that’s exactly what would happen under this batsh*t crazy scheme.

I live in CAlifornia, it is an abysmal political hole; but it doesn’t have to leave the union. What is needed is for DC to de-fund EVERY SINGLE PROGRAM AND ENTITLEMENT THAT FLOWS TO CALIFORNIA. Once it is bankrupt and all the leeches go back to Mexico, Armenia, Russia, China, etc, and the Hollywood communists no longer have their nannies & security guards, it can conceivably re-emerge as a nice place to live. But a major earthquake in Sacramento would also go a long way as a corrective.

This is the objective of communists: destroy the middle class, and then have a slave class and an elite class that lords over them.

Malignant clowns like this guy think they’re gonna be in the elite class. Though a piece of drek like this would make a brutal commissar. Kind of like guards at North Korea concentration camps: low pay, but lots of power over the unfortunate.

How else would michelle obama have made 300,000 per year in chicago, but for the same corrupt system? (That ignoramus couldn’t make a dime in honest government, or in the private sector.)

In no way should CalExit be made easy on them. We should force them to do a county by county vote on what parts of the state leave and what parts stay. Likely the USA could retain the central valley and North California as well.

The leavers would get all the coast except possibly for Del Norte County, unless I am greatly mistaken. But I think the interior counties (Trinity, Siskiyou, and points east) would elect to stay in the US, especially if they got a state of their own.

Worse than this morons ignorance and his malignant intent: he is a horrible dresser