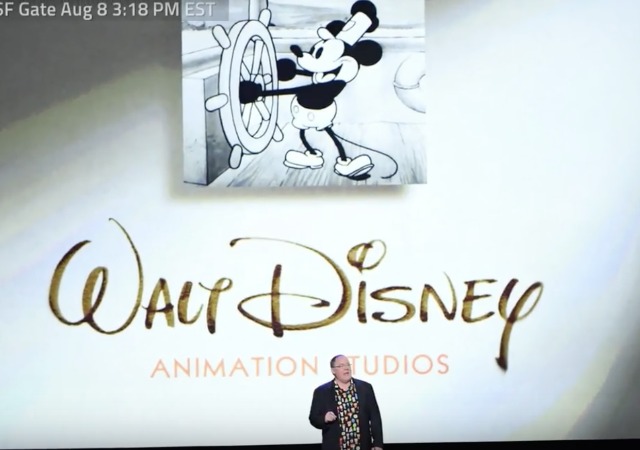 Netflix took a major blow on Tuesday when Disney announced it will remove all of its content in 2019 to start its own streaming service. ESPN, which Disney owns, will start a streaming service in 2018. From The Hollywood Reporter:

Details of the Disney streaming service were sketchy Tuesday, with CEO Bob Iger saying that if a movie is Pixar- or Disney-branded, it will probably appear exclusively on the new service — including shows and movies made specifically for the service — but the jury is still out on Marvel and Star Wars films.

ESPN has been losing TV subscribers for a few years and an online stand-alone product has been predicted for months, but ending a distribution agreement with Netflix beginning with the 2019 theatrical slate caught investors off-guard and Netflix shares quickly sunk 4 percent on the news in after-hours trading.

Iger called the initiatives “a strategic shift in the way we distribute our content.”

Disney sort of dropped the hint last year when it acquired the majority of the shares of a certain streaming technology company. NBC News reported:

The news follows Disney’s majority-share acquisition of BAMTech, a streaming technology and marketing company it first bought one third of last year for $1 billion. Disney said Tuesday that it purchased an additional 42 percent of the company for $1.58 billion.

“The media landscape is increasingly defined by direct relationships between content creators and consumers, and our control of BAMTech’s full array of innovative technology will give us the power to forge those connections, along with the flexibility to quickly adapt to shifts in the market,” Disney Chairman Robert A. Iger said in the release.

Bloomberg points out this will not cause the death of Netflix, but more than likely the move will greatly affect the company considering the popularity of Disney content.

As for Marvel, the shows Luke Cage, Jessica Jones, and Daredevill will stay on Netflix for now.

We also do not know if Disney will share content on Hulu even though it owns a stake in that streaming company. The Disney executives said that a multiyear deal it made with Hulu to stream some content “will not be affected by Disney’s upcoming service.” But they did not expand on what would happen after the deal expires.

ESPN has continued to slide, causing a big revenue problem:

Broadcasting, though, didn’t perform much better than did cable, with the ABC television network also seeing higher programming costs and lower ad revenue.

The BBC is trying this, too, having pulled all their content from Netflix in favour of their own service. CBS is trying it as well with Star Trek: Discovery, and I’ve seen a number of smaller contenders specializing in horror and history popping up, and there’s niche services like Crunchyroll.

This is just dumb. The reason streaming services are so popular is that they aren’t siloed, and they’re cheap. Right now I can pay $20/month for Hulu and Netflix and get all the TV I want. If the upstream publishers start pulling their material and I need to pay $10 + 10$ + 10$ + $10 + … to get BBC, Disney, Netflix, Hulu, Crunchyroll and whatever else, then we’re right back to the days of $100/mo + cable bills and piracy is going to take off again.

These publishers see Netflix making huge money and they think they can charge the same amount for their limited library. I suspect they’re going to find out otherwise and end up with a very large infrastructure investment they can’t make back.

It’s not accurate to call Disney’s library “limited.” The “Star Wars,” Pixar and Marvel franchises are some of the most popular and valuable media content around. Netflix is spending a fortune, annually, on developing its own content, and, Disney wants to get into the streaming game, so, each company is moving onto the other’s turf, for obvious long-term strategic reasons.

If Disney strikes content-licensing deals with rival movie studios, while preserving its own content (including ESPN and other cable content) as a Disney-streaming service exclusive, there is no reason why it couldn’t compete with Netflix, if the subscription price is competitive.

Yes it is accurate to state that Disney does not have a deep enough library to offer their own streaming service.

spot on. I ain’t paying two companies so I can have access to 7000 movies that I mostly don’t want to watch.

They want to liberate you of the contents of your wallet. You cut the cord and that didn’t sit well with them.

I have CBS all access, but I’m considering dropping due how CBS/Paramount is treating the people that are doing Star Trek fan movies. I do understand why, the quality of the fan movies are starting to exceed the quality of Star Trek Discovery, and it’s staying somewhat better in the canon of the original series.

Not only that, but I expect “The Orville” will outperform ST:Discovery (AKA STD, who’s bright idea was that?). It’s fun. What’s not to like?

As a result of Comcast’s sleazy and greedy business tactics, running my TV bill up from $56 to over $140 a month over about four years, and delivering less utility, I disconnected their cable TV service several years ago.
I replaced it with an internal server for movies, which I buy DVDs at rummage sales for $1 or less each. DVDs have become cheap because so many people are switching to streaming.
In addition I have a few digital tuners (local content) which feed UHF modulators and a central DVD-VHS player feeding a UHF modulator. These feed the original cable system to all TVs.
Those are controlled with RF remotes, and that allows me to move from room to throughout the day while watching or just listening to whatever content in whichever room I happen to be in.
Each TV also has a streaming player, initially Roku (but they have been loading channels without permission lately, unacceptable), and now I am transitioning to generic media players. I have Netflix, Hulu and Amazon Prime streaming services.
The truth is that there is nothing produced by Hollywood that I cannot live without.
What will happen if the streaming services become fragmented is that I will place far more content on my server and drop streaming.

and has absolutely NOTHING to do with turning sports into a political commentary?

Exactly! They complain about “severance packages for departing employees”…

Hmmm, I guess it is just a complete mystery as to why so many employees have been departing…

It’s said by some that Walt Disney was a tyrant.

I doubt very much he ever approached being the tyrant that Disney has become as a nest of homogeneous Collectivists.

Once you’re dead and can’t defend your legacy, it’s open season on your property, name, and legacy.

Streaming is cheap-ish. Soon, all content providers will be streamers, just as it became cheap for every garage band in America to “cut a CD” when the price came down.

In that case, aggregators like Netflix may suffer the same fate as the record labels.

Quite a long time ago Jerry Pournelle suggested publishing houses might regain relevance via high-quality editing. A “Putnam House” release might denote a well-edited work in the same way Dreamworks has become known as the purveyor of quality animation.

Record labels may still have a healthy future. It’s one thing to release a CD. It’s another to get publicity for the group, not to mention bookings. Another thing that a record label can offer are not just high-quality hardware & software, but the professionals to run it.

Makes sense.
Disney owns the Star Wars library, and there has been rumors of a “Star Wars network” ever since Disney acquired Lucasfilm.
Disney certainly has enough content between all their movies, tv shows, cartoons, plus Pixar, Star Wars, and Marvel.

I haven’t seen YouTube mentioned yet. I have 5 teenagers and since I purchased a smart TV a couple years ago for the family room YouTube easily accounts for at least 50% of what we watch. They have so much great content we can watch as a family such as Dude Perfect, DevinSuperTramp, Mark Rober, Demolition Ranch, Vet Ranch, BackYard Scientist, Game Theory, and Film Theory just to name a few off the top of my head. Those channels don’t even include any of the dozen or so fishing YouTube channels that are my favorites. All those channels are in 4K and look amazing on a 65” TV.

That content was all free with commercials but we watch so much we subscribed to YouTube Red this year for $10 a month. We now can watch all YouTube commercial free, download content to devices to watch offline and it also includes YouTube Red Original content. I’m really looking forward to the new Karate Kid series that’s in the works.

The other great thing about YouTube is the content doesn’t have to be filtered through the Hollywood PC machine so what I watch is not polluted by a bunch of political mumbo jumbo. I really think this direct link from the creators to the customers is the future.

It’s a shame that Disney is going to do this, now that they own my entire childhood (minus Batman). Definitely not paying for Netflix and whatever theirs is going to be called. And just when I’m finally ready to pull down the old satellite dish, Netflix is going to lose more content.

As for ESPN, their viewership went down when they started talking politics and athlete’s twitter wars.

they need to remember the story of the goose that laid the golden eggs.

Segmentation will be the death of these platforms. Aggregators have a lot more value than studio-specific services. What’s next, the Sony Channel? The Paramount Channel?

Look at how many streaming service which are out there now, with few people willing to grease their palms.