Democrats Don’t Know How to Tell Hillary to Go Away

Democrats Don’t Know How to Tell Hillary to Go Away

“wish she’d “move on,” as Senator Al Franken has put it” 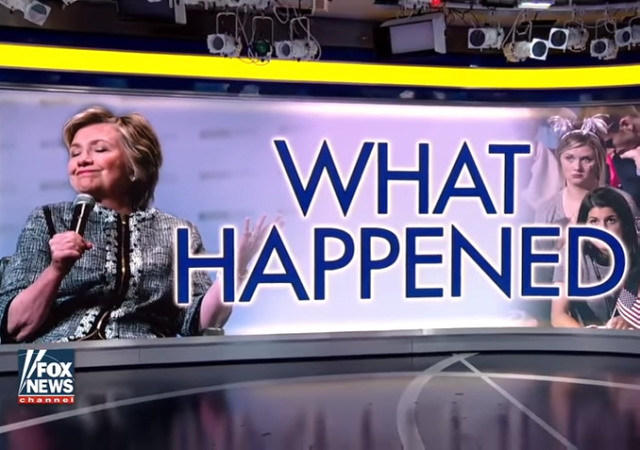 Democrats need Hillary Clinton to leave the stage. Until she quietly goes away, she serves as a reminder of their 2016 loss and prevents others from assuming leadership of the party.

This fall, Hillary’s new book will put her back in the spotlight. Democrats aren’t happy about it but what can they do? Albert R. Hunt writes at Bloomberg:

Democrats, reveling in President Donald Trump’s plummeting popularity and the Republican Party’s civil wars, are looking forward to September. Except for one thing: the rollout of Hillary Clinton’s next book right after Labor Day.

Clinton has promised to “let my guard down” in the book, “What Happened,” explaining her shocking loss to Trump in November. She has already offered up several explanations, blaming Russian interference, former FBI director James Comey, and misogyny, while also acknowledging tactical errors by her campaign.

Many Washington Democrats, though unwilling to criticize her in public, wish she’d “move on,” as Senator Al Franken has put it. They fear that her complaints help Trump make his case that the controversies surrounding him flow from the Democrats’ bitterness about their 2016 loss.

They prefer the approach taken by Al Gore after his equally controversial loss in 2000. Gore didn’t really criticize the administration of President George W. Bush for almost two years, even though he, like Clinton, won the popular vote while losing in the Electoral College. (Gore lost when the Supreme Court stopped a vote recount in Florida.) Gore went on to start a new career, winning a Nobel Prize for his work on climate change and starring in the Oscar-winning documentary “An Inconvenient Truth.”

Associates hoped Clinton would also find a way to make a different contribution, perhaps as a university president or foundation head. There have even been suggestions that she move overseas for a couple of years.

FOX and Friends discussed this yesterday:

Michael Sainato of Observer has more on this:

The book provides an opportunity for Hillary Clinton to co-opt the Democratic Party’s narrative in the Trump era. Rumors have circulated that she doesn’t hold back in voicing her views on the 2016 election and blames various scapegoats for her loss. She reportedly attacks Sen. Bernie Sanders in the book, who her most prominent loyalists claim weakened her candidacy. This narrative reveals Clinton’s entitlement: She thought she would coast through the primaries unchallenged. Her new book rehashes this divisive narratives that continues to split the Democratic Party in two.

The book is due for release just as Hillary Clinton’s new Super PAC, Onward Together, is preparing for the 2018 midterm elections. The PAC hired two former Clinton aides, Adam Parkhomenko and Emmy Ruiz, earlier this month. The PAC’s co-founder, former DNC Chair Howard Dean, recently made headlines for calling progressives “the whiny left.” Hillary Clinton reportedly transferred $800,000 left over from her presidential campaign to start the new Super PAC.

Good luck getting Hillary off the stage, Democrats. Like most of you, she thinks the election was stolen from her. She will never stop talking about it.

“How can we learn to miss you if you won’t ever go away?”

notamemberofanyorganizedpolicital in reply to fscarn. | August 18, 2017 at 1:21 pm

Yeah, especially when Hillary keeps recycling the same old failed everything about her.

You go girl! As long as your involvement in the Democrat Party helps continue its downward slide into oblivion and irrelevancy, your contribution is greatly appreciated!

Many Washington Democrats, though unwilling to criticize her in public

I guess that “speaking truth to power” stuff only goes so far.

Hillary? They can’t get rid of Al Gore!

notamemberofanyorganizedpolicital in reply to RodFC. | August 18, 2017 at 1:22 pm

Thanks for the good laugh this morning!

Hillary hasn’t been shown the door because she’s still the best that morally and financially bankrupt party has to offer.

The question that needs to be answered is how the Progressive Fascists could have nominated such a corrupt lying person.

You seem to have forgotten that corruption and lying are key competencies for a Progressive Fascist resume.

notamemberofanyorganizedpolicital in reply to nordic_prince. | August 18, 2017 at 1:24 pm

Conrad also forgot that Hillary made the “Democrats” an “offer” they just could not “refuse.”

Well not refuse and not visit that vacationland of Arkanside, Arkansas!

“The question that needs to be answered is how the Progressive Fascists could have nominated such a corrupt lying person.”

Shirley, you jest. Being a corrupt lying person are prerequisites for leadership positions in Progressive Fascists “Democrat Party” regimes.

She only had $800,000 left over from her campaign run? That seems an incredibly small amount considering how much money she was pulling during the election. Doesn’t she have to provide the details of what came in and what it was spent on? Might be interesting to see if an accountant can find where all her money went.

The Dems will have a hard time really divorcing themselves from Hillary.

The two Clintons managed to weaponize corruption to horizons the Democrats haven’t seen since the glory days of Tammany Hall. That vast flood of easy money is a potent narcotic.

If the Party turns sharp Left into Sandersnista territory, they can kiss most of that largess goodbye, as Bernie just doesn’t … well let’s say, “understand” money in the way the Clintons do.

And if the Party dives downward, into the infernal pit of perpetual racism and grievance-mongering, that stuff is mostly noise but not much cash; enough to keep Jesse Jackson in nice suits, but a couple of decimal points short of real money.

No, for the modern Dems, I’m afraid Clintonism is the only game they’ll consider worth playing.

She wants power. Money is a way to having power. She is corrupt. Bribing her will not work. Like feeding a bear, it will keep coming back for more. The Democrats have a way of making people disappear or unable to testify. Like that diplomat who was going to testify against the Clintons and dropped a barbell on his own throat.

Don’t forget the 3 gay men, former associates of President Obama, who were murdered for no apparent reason, after his election. Or the DNC staffer who wasn’t robbed but sure was shot dead just last year. Of course, minor actors disappearing is one thing. She is not a minor actor. How about doctors institutionalizing her for her mental “breakdown”? That used to work in the former Soviet Union.

Hillary 2020 because it is STILL HER TURN!

notamemberofanyorganizedpolicital in reply to Fiftycaltx. | August 18, 2017 at 1:27 pm

Hillary Clinton is a very creepy, sick person, and a murderous despot in waiting.

Fortunately, most people who don’t see that, don’t like her anyway.

Considering the above, and the DOJ is reopening the case surrounding her ‘foundation,’ she will be the gift that keeps on giving.

On the other hand – and until we get rid of them – the hacks of the GOPe are the gift that keeps on giving to the left.

notamemberofanyorganizedpolicital in reply to TheFineReport.com. | August 18, 2017 at 1:29 pm

And he got the personality.

Ain’t that the truth!

She intends to run again. That’s all this is – like a cat marking its territory.

A problem for the ages, put to music by Dan Hicks and his Hot Licks.

She knows where the bodies are buried, heck, she buried most of them! The Dems still cannot believe that the smartest woman in the world lost a rigged election!

Business is real slow at The Clinton Foundation.

Hillary has to keep busy at something.

I’m guessing that idiot Robespierre is the one marking downvotes.