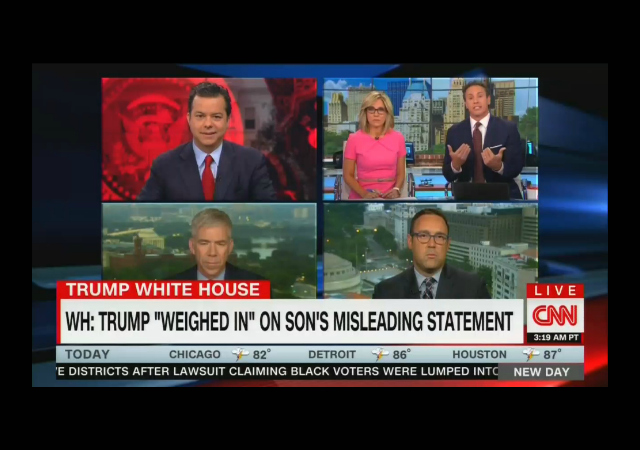 The opening of CNN’s 6 AM hour this morning was one, long lollapalooza of Trump-bashing. Led by co-host Chris Cuomo, panelists David Gregory, Chris Cillizza, and John Avlon took turns whacking the Trump piñata.

The topics were diverse: a putative Republican “backlash” against the president; Don, Jr.’s meeting with the Russians; and the murder of Seth Rich. But there was consistency in the relentless criticism of the president.

The panel was entirely stacked with Trump critics: not a defender of the president, or a Republican of any stripe, in sight.

Mark, seriously, how can you watch this sewage crap sh!t every day, and maintain your sanity?

I would need to break things, if I had to watch this.

He’s a trooper, he is. I hope he’s getting hazardous duty pay.

Seriously, I really appreciate the posts. I want to know what’s being said over there, but I really, really don’t want to watch.

“how can you watch this sewage crap sh!t every day, and maintain your sanity?”

notamemberofanyorganizedpolicital in reply to Mark Finkelstein. | August 2, 2017 at 10:41 am

Oh, like the quote of the Jim Backus character Thurston Howell the III:
“A little mayhem may save us all!”

But seriously Cuomo and CNN are doing some violent “self-projecting” there!

So who says I’m sane?

I read the original article from the Washington Post, as carried by the San Diego Union-Tribune. It is unsourced, and may turn on speculation ginned up to “prove” that leaking is still going on.

Thanks for watching and reporting. I want to keep track of ’em, but do not have the time or patience to watch.

Also, I should mention that there was no byline on the Washington Post article, which is unusual for the front page of the U-T. I wonder if it is one of those Podesta specials? If the identity of the author(s) was known, would that instantly tank the credibility of the text?

finally, the truth: CNN doesn’t “deserve the benefit of the doubt”..
what’s good for the goose….