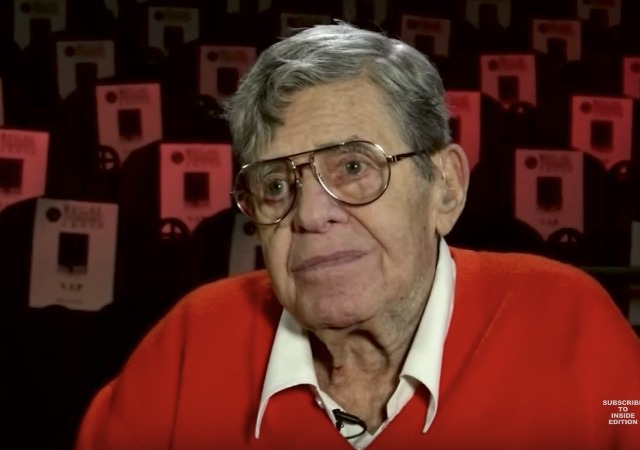 Comedic legend Jerry Lewis has died at the age of 91. He shot to fame with his teammate Dean Martin and gained notoriety in The Nutty Professor.

Most of the younger generations have come to known him through his annual Labor Day telethon to raise money for Muscular Dystrophy.

Very sad to report entertainment legend #JerryLewis has died today at 9:15 a.m. at his home in Las Vegas. He was 91.

At the peak of their popularity, Martin & Lewis ruled nightclubs, radio and then the box office with their breezy yet physical comedy act, reigning as the top draw at theaters from 1950-56.

After an especially acrimonious break-up with his partner, Lewis remained as the No. 1 movie draw through the mid-1960s on the strength of such classics as The Bellboy (1960) and The Nutty Professor (1963). As Paramount’s biggest star, he had the creative freedom to make the moves he wanted to make.

Lewis also was known for his efforts as national chairman of the Muscular Dystrophy Assn. He devoted more than a half-century to fighting the neuromuscular disease, hosting an annual Labor Day telethon — and raising nearly $2.5 billion — from 1955 until he was ousted before the 2011 telecast. Lewis was nominated for a Nobel Peace Prize in 1977 for his efforts.

After Martin and Lewis broke up in the late 1950s, he filled in for Judy Garland in Las Vegas where he performed until 2013.

Also after the breakup, he signed a deal with Paramount to make 14 movies in seven years for $10 million. The production company didn’t have a Christmas movie in 1960, but Lewis found a way to come up with The Bellboy in one month.

He was on a professional roll, playing a series of kind-hearted hyperactive dupes: In 1960’s CinderFella, directed by Frank Tashlin, he offered up a comic gender reversal on the Cinderella tale and danced down an impossibly long staircase to sounds of the Count Basie Orchestra. In 1961’s The Errand Boy, which he directed, he played an inept employee in a studio mailroom.

But it was 1963’s The Nutty Professor that cemented his reputation. Directing himself, Lewis starred as a near-sighted professor and chemistry egghead who dazzles his coeds by becoming the ultra-cool pop singer Buddy Love. The movie also served as the basis for Eddie Murphy’s retooled remake in 1996, with Murphy taking over the nerdy professor role, this time turning into a sharp-tongued comedian. (Murphy presented Lewis with the Hersholt trophy at the 2009 Oscars.)

Throughout the late 1950s and early ’60s, Lewis was constantly in motion, recording several records. His song Rock-a-Bye Your Baby sold nearly 4 million copies, and he hosted the Oscars in 1957 and 1959.

Lewis struggled with numerous health problems over the years, including pulmonary fibrosis. He had open heart surgery in 1983 and prostate cancer surgery in 1992. In 2003, Lewis went into treatment for his dependence on prescription drugs.

Lewis married Patti Palmer in 1944 and they had six sons together. The marriage ended in 1980.

He married SanDee Pitnick in 1983 and they adopted a daughter. He told Inside Edition in 2016 that his greatest fear is leaving his wife and daughter.

CNN reported the death of the wrong Jerry Lewis. They reported that Jerry Lee Lewis was dead.

Whatever Trump says or doesn’t say, it’ll be wrong.

I hear Jerry Lewis was a jerk.

May I live so long to be such a jerk.

No, that was Steve Martin… 🙂

Jerry used to keep his boat at the Marriott hotel and marina in San Diego. I kept my boat there in the late 1990’s also. Met him several times around the marina, in the hotel and at nearby restaurants. He was a classy guy. Always friendly anxious to talk and joke and just be “one of the guys”.

In the early 70’s I worked with a lot of MD kids. His contribution and dedication was appreciated by many.