Sacred figures removed in the name of “inclusion.” 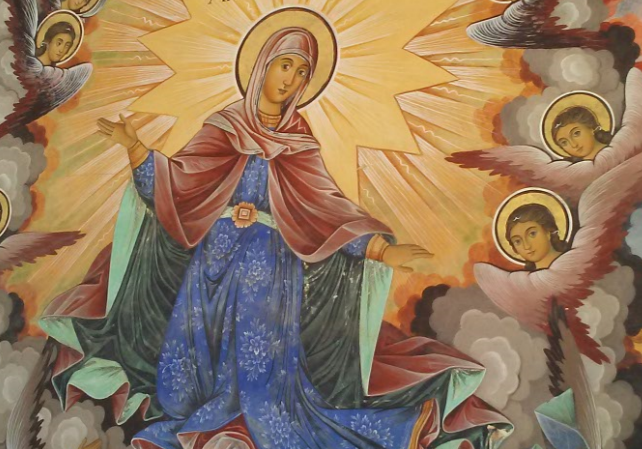 Legal Insurrection colleague Kemberlee Kaye noted that one would be hard pressed to name the dumbest thing to happen last week in the name of inclusivity and tolerance.

However, I think it would be a safe bet that the actions of a California Catholic school would pose fierce competition for that title.

A California Catholic school is facing a backlash from parents after officials took down some religious statues — including one of Mary and baby Jesus — over concerns that they were “alienating” prospective students.

The head of the San Domenico School in San Anselmo said parents of some prospective students who visited the campus – which was founded in 1850 and serves 671 students grades K-12 — expressed concern about the religious figures, according to the Marin Independent Journal.

“If you walk on the campus and the first thing you confront is three or four statues of St. Dominic or St. Francis, it could be alienating for that other religion, and we didn’t want to further that feeling,” Amy Skewes-Cox, who chairs the school’s board of trustees.

Not surprisingly, parents sending their children to the institution are not happy with the posturing.

In an email to the school’s board of directors, Dominican Sisters of San Rafael and the head of school, Shannon Fitzpatrick objected to the removal of the statues and other steps the school has taken in an effort to make the school more inclusive.

“Articulating an inclusive foundation appears to mean letting go of San Domenico’s 167-year tradition as a Dominican Catholic school and being both afraid and ashamed to celebrate one’s heritage and beliefs,” wrote Fitzpatrick, whose 8-year-old son attends the school.

…Cheryl Newell, who had four children graduate from San Domenico, said, “I am extremely disappointed in the school and the direction they’ve been going. This isn’t a new thing that they’ve been intentionally eroding their Catholic heritage. They’re trying to be something for everyone and they’re making no one happy.”

Representatives from the institution deny that the move has anything to do with the unrest after Charlottesville.

Amy Skewes-Cox, who heads San Domenico School’s board of trustees, said at least 18 of the 180 religious icons still remain at the school as part of a plan approved unanimously by the board last year, the Marin Independent Journal reported.

Ms. Skewes-Cox said the timing of the statues’ removals and the national statue debate spurring from the unrest in Charlottesville, Virginia, is an unfortunate coincidence and have “absolutely no connection other than it is change, and people have a hard time with change.”

I would argue that if someone is shaken by seeing statues of the two most significant figures in the Catholic faith, then perhaps selecting a school with a more secular history that is not named for a Catholic saint would be the better match. There are plenty of those in California.

I will be saying prayers in Mass this Sunday that the upcoming week will bring saner, and better, news for all of us.

If you have chosen to follow the Christian faith, would you want to number yourself among those who made this decision?

“But he that shall deny Me before men, I will also deny him before My Father who is in heaven.” Matthew 10,33.

Standing up and being counted. That’s an outward sign of your faith in the Lord, and such includes witnessing (including the silent witness of statues), delivering tracts, leading a Christian life; all of these and more are following the Lord’s Great Commission, also found in Matthew, “Therefore go and make disciples of all nations, baptizing them in the name of the Father and of the Son and of the Holy Spirit, and teaching them to obey everything I have commanded you.”

Muslims need the Lord Jesus as much as anyone. Those in charge of this putative Catholic school are not showing Christian love. Here they have in attendance children from all kinds of backgrounds and faiths. What better opportunity to give Christian witness. And remember, the parents who sent their kids to this school did so knowing it was a Catholic school.

Seems doubtful that the leaders of this school are familiar with Scripture. “But sanctify the Lord God in your hearts, and be ready always to give an answer to every man who asketh you [including students at your Catholic school] a reason for the hope that is in you, with meekness and fear.” 1 Peter 3,15.

This school now has about as much cache as Pope Francis.

“If you walk on the campus and the first thing you confront is three or four statues of St. Dominic or St. Francis, it could be alienating for that other religion…

What “other religion” could be alienated?

I can’t count on my fingers the number of Hindus who went to Catholic schools.
I’ve also never met one who didn’t know what was inside the door.

I’m Jewish and I find this to be extremely…. odd. While I may disagree with Catholics (and other Christians) on many Biblical principles, I do not understand this school’s enthusiasm with abandoning their heritage. /smh

Never be surprised at the stupid things done in its name.

Ludicrous.
Enrollment is down in the catholic schools in my area, but that doesn’t mean you drop the “catholic” part to fill classrooms.
You’re either a Catholic School, or you’re not.

Our parish school began accepting non-Catholic students years ago as a means of stemming a declining enrollment in an ageing parish. As the percentage of non-Catholic enrollment increased the identity as an institution of religious education decreased. Let’s just say that accommodations were made based upon funding needs until their mission of religious education became impossible to fulfill. All manner of justification was used during the death spiral, but at it’s closing last June enrollment was 97% non-Catholic. The school was still financially viable, but not even remotely effective at providing a Catholic education.

HamiltonNJ wrote, “You’re either a Catholic School, or you’re not.”

If only Boston College, Notre Dame, Georgetown et al. would remind each other of this. But, ya know, things get in the way…like money, non-Catholic attitudes, etc.

Obviously they don’t think of themselves as primarily a Catholic school any more. Probably Jesuits.

The Pinko Pope undoubtedly is pleased.

Long ago when the world was new and I was a teenager, I pondered becoming a Catholic. That was when you had to learn Latin to do it right. While there was much that was attractive, it did not work out.

Some years ago, I was at a Catholic funeral mass for one of my fellow officers. I could not tell it from a Protestant ceremony.

It seems that American Catholicism is no longer Catholic anyway. Let San Domenico rename itself as St. Obama. Put up statutes of Pelosi as the Madonna. Give California Leftists what they really want.

This is a similar to the principle in real estate law “came to the nuisance”which I shall call “came to the offense.” Parents and prospective students inspecting the school and curriculum prior to application and enrollment have thereby been put on notice of the schools religious nature and presence of religious statuary and other icons. Any offense subsequently taken is disingenuous.

At the Board of Directors meeting:
First guy: Listen, we are just not getting the revenue we need to pay ourselves and employees.
Second guy: That’s right. We need to get more tuition-paying students in here.
Third guy: But interest in the school is down and there are fewer Catholics in the area.
Fourth guy: I know what to do. We’ll get non-Catholics to enroll. We’ll take down statues that have been here forever and make the school look more like a private school.
All: Yayyyyyyyyyyyy! Let’s give ourselves a raise.

We all know that those statues eat small children when nobody is looking. /snark

Here’s why:
Mirza Khan, Director of Religious Studies (father and grandfather were Sufi!!)
His book: The Seven Pillars of Wisdom
The faculty: “includes Pir Zia Inayat-Khan, Taj Inayat, Devi Tide, Amir O’Loughlin, Gayan Macher, Mirza and Satya Inayat Khan, Wendy Jehanara Tremayne and Netanel Miles-Yépez.”
http://www.zoominfo.com/p/Mirza-Khan/1304233275
“San Domenico does not instruct its students in Catholic theology. Director of philosophy, ethics, and world religions Mirza Khan, whose father and grandfather were Sufi Muslim teachers, said that fact is well within the school’s Dominican tradition.”
http://conservativefighters.com/news/catholic-school-removes-statues-jesus-mary-inclusive/
So, why is a muslim teaching at a so called Catholic school?!