Canada to Migrants: No Guarantee You Can Stay

Canada to Migrants: No Guarantee You Can Stay 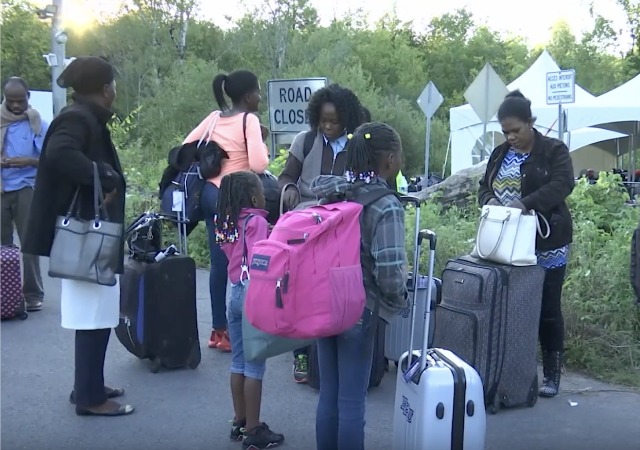 Migrants who have either just arrived in America or been here for awhile have started to venture into Canada in record numbers by using the back roads to take advantage of loopholes in Canada’s immigration system. The Associated Press reported:

But, in a quirk in the application of the law, if migrants arrive in Canada at a location other than a port of entry, such as Roxham Road, they are allowed to request refugee status there.

Since the border crossing near Champlain, New York, is not a checkpoint, which means there is no place to process the migrants or even a place for them to stay.

This has led Canada to deploy soldiers to build temporary shelter for the 700 migrants since waiting times are at two to three days. From The Guardian:

The camp – consisting of modular tent shelters with floors, lighting and heating – aims to rectify this. Military personnel will not participate in security matters, the armed forces said, and most of the soldiers will return to their home bases once the camp is built. Those who remain on site will be tasked with maintaining Canadian forces equipment.

After their screening, buses take the migrants to their next destination. Canadian officials have decided to house some in Montreal’s Olympic Stadium.

The majority of the new migrants are Haitians who have decided to leave America because Trump’s administration stated that “it planned to end in January a special humanitarian program enacted after the 2010 earthquake that gave 58,000 Haitians permission to stay temporarily in the U.S.” This is what then-DHS Secretary John Kelly said:

John Kelly, the then homeland security secretary, eventually allowed for a six-month extension to the program, which gives Haitians in the US temporary protected status (TPS) as their country recovers from a series of disasters including the 2010 earthquake, a cholera epidemic and Hurricane Matthew. But Kelly warned those granted TPS not to assume it would be renewed again.

“This six-month extension should allow Haitian TPS recipients living in the United States time to attain travel documents and make other necessary arrangements for their ultimate departure from the United States, and should also provide the Haitian government with the time it needs to prepare for the future repatriation of all current TPS recipients,” Kelly said in a statement.

People have circulated on social media that Canada will immediately give these Haitians residency, which is not true.  Brenda Shanahan, a Liberal Party Member of Parliament, said she is proud of Canada, but also stated that these refugees will not receive a “guarantee they will be able to stay in Canada.” She insisted this movement is “not a free ticket for refugee status, not at all.”

Conservative lawmaker Michelle Rempel has encouraged the government to do something soon to deal with the influx of migrants:

“All that we have heard is that we are monitoring the situation,” she said. “The government needs to come up with a plan right away to deal with this.”

It will further backlog a system in which some refugees are already waiting 11 years for hearings, Rempel said. Canadians will question the integrity of the immigration system if the “dangerous trend” of illegal crossings continues, she said.

Trudeau himself recently said his country has border checkpoints and controls that need to be respected.

“We have an open compassionate country, but we have a strong system that we follow,” he said. “Protecting Canadian confidence in the integrity of our system allows us to continue to be open, and that’s exactly what we need to continue to do.”

If there is no longer a humanitarian emergency in Haiti then its only right that they go home. They knew from day 1 that any residency in America was not permanent. Now that the time to go home has come around (and event they knew was always coming) they should be leaving and not trying to become a problem in another country.

But it’s not fair that they have to go home to a third world country after living about seven years in the US.
/s/

If the Clintons had used the money they collected for aiding Haiti after the earthquake to actually do something to help most Haitians, these people wouldn’t be quite so afraid of being sent back to their home country. But back they should go, they have overstayed their welcome.

Send them to the People’s Republic of Hawaii.

Hawaii? Now there is an excellent idea, Hawaii would love to have some new ‘tax payers’, perhaps even giving them a “free” bus ticket! Every ‘refugee’ knows that free is good, eh?

What I noticed about the photo’s were all the nice luggage and how well dressed they were. It’s hard to find ‘refugees’ so well dressed or prepared for travel as these.

But, in a quirk in the application of the law …

So, it’s not a “loophole” in immigration law, it’s on outright enforcement failure.

At least the Haitians are Francophones … of a sort … which should impress the Parti Québécois, even if no one else.

We should take a page from Mexico’s book and refuse to allow them to re-enter the U.S.

We’ve been providing for these “refugees” for years. Let little Justin and his “open, compassionate country” take their turn now.

Or was that all just talk? Open borders and unlimited numbers of “refugees” are wonderful — so long as it’s U.S. taxpayers picking up the tab, dealing with the crime and societal disruption, etc., right Justin?

Canada is one of the countries whose immigration system inspired proposals for US immigration reform, which is finally bubbling out under the Trump administration. I suspect Canada got its undeserved reputation for openness and humanity when the elder Trudeau welcomed large numbers of [white, Anglophone] American draft dodgers. It has also been welcoming to wealthy Hong Kong Chinese with money to invest. However, something tells me it does not want a flood of Central American and Haitian paupers