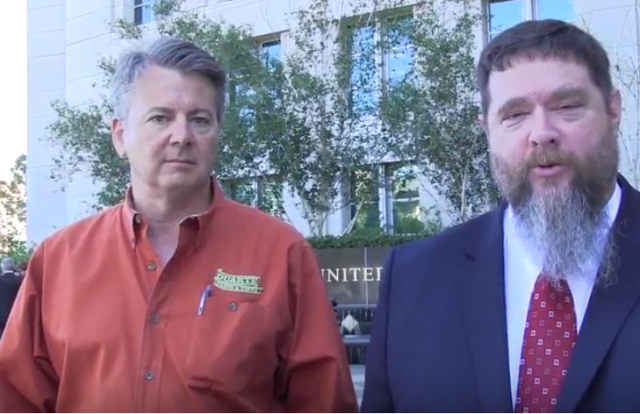 Earlier this summer, I reported that the EPA was moving to rescind the Obama era’s confiscatory and confusing Waters of the United States (WOTUS) rules.

But this did not come in time for one California farmer, who reached a settlement in the case involving a wheat field he plowed.

Northern California farmer John Duarte spent years fighting the federal government after being fined for plowing over protected wetlands on his property. He attracted a nationwide army of conservative supporters who saw it as government overreach and hoped the Trump administration would order federal officials to back off.

But just before his trial was set to start Tuesday, Duarte settled.

Duarte agreed to pay $330,000 in fines and another $770,000 on “compensatory mitigation,” according to a settlement agreement reached shortly before proceedings were to begin in U.S. District Court in Sacramento.

A judge already had ruled that Duarte broke the law; the trial was going to establish the penalties. The government had sought a $2.8 million fine and tens of millions of dollars in mitigation expenses.

Duarte was looking at a substantially higher fine, if he continued to pursue the case and tried to appeal the judgement.

“This has been a difficult decision for me, my family, and the entire company, and we have come to it reluctantly,” said John Duarte.

“But given the risks posed by further trial on the government’s request for up to $45 million in penalties, and the catastrophic impact that any significant fraction of that would have on our business, our hundreds of employees, our customers and suppliers, and all the members of my family, this was the best action I could take to protect those for whom I am responsible.”

John would have preferred to see this case through to trial and appealed the court’s liability ruling, which holds that plowing a field requires federal permission — despite the clear text of the Clean Water Act and regulations to the contrary,” said [Pacific Legal Foundation Senior Attorney Tony] Francois. “John and his counsel remain concerned that legal liability for farming without federal permission undermines the clear protections that the Clean Water Act affords to farming and poses a significant ongoing threat to farmers across the nation.

The troubles for Duarte began in 2013, when the Army Corps of Engineers began implementing a poorly written set of rules:

…Mr. Duarte bought the 450-acre plot in Tehama County to grow wheat, but the Army Corps of Engineers ruled in 2013 that the pools running alongside the furrows were navigable waters under the Waters of the U.S., codified by the Obama administration in 2015.

The Corps. said he should have obtained a permit first and accused him of “ripping” federally protected wetlands. Mr. Duarte sued the Corps., but a federal judge ruled against him in June 2016.

Under the consent decree, Mr. Duarte admitted no liability but must “smooth all disturbed soil surfaces and reasonably match the pre-November 2012 grade and hydrology within impacted waters of the United States on the site,” which is about 22 acres.

Why would he settle now, rather than appeal to Sessions to drop the case? In fact, why did Sessions not order his department to drop the case as soon as he became aware of it, just as Holder ordered it to drop the already-won case against the New Black Panthers?

As in, no law or regulation ever gets repealed. If it’s on the books, it WILL be enforced to its fullest extent, no matter how inane, stupid, or ill-conceived it may be.

probably because Sessions recused himself. Worst Attorney General ever.

If My Lawyer Looked & Sounded as idiotic as this guy’s lawyer??
then I’d settle quickly..

not totally against lawyers just against idiots..

When did Billy Gibbons get a JD?

The closest this guy could get to ZZ Top would be the sounds he makes sleeping in court.

“This has been a difficult decision for me, my family, and the entire company, and we have come to it reluctantly,” said John Duarte.

“But given the risks posed by further trial on the government’s request for up to $45 million in penalties, and the catastrophic impact that any significant fraction of that would have on our business, our hundreds of employees, our customers and suppliers, and all the members of my family, this was the best action I could take to protect those for whom I am responsible.”

Duarte losing would cost him significantly, even bankrupt him and his family and his company.

On the other hand, Duarte winning would cost the government nothing. Even if Duarte were awarded attorneys’ fees, somehow I doubt any party other than the government can collect “mitigation fees” (WTF are those!?).

Let this be a reminder of two things:
– First, just because you paid money for a piece of land and have a deed that says you own it, you don’t own it. Try not paying your property taxes or doing something with it the government says you can’t, and see how long they “let” you keep property that you “own”.
– Second, the government comes into any criminal or civil liability proceeding with essentially unlimited resources. They can send teams of lawyers after you, while you’re limited by what you can afford. Any delay, any extra hearing, evidence collection, etc., costs them nothing (heck, they’re PAID to be there!), but will cost you significantly.

In the event you win and are awarded attorneys’ fees (which doesn’t always happen), the government doesn’t pay them; the taxpayers do. You, on the other hand, get punished whether you win or lose; the process is punishment in itself.

Ridiculous, but not new.

A few decades ago, after a hurricane broke through a barrier sandbar, Atlantic waves started rolling through Chatham Harbor and began to wash away one end of Main Street. (Chatham is the Massachusetts town in the news of late, due to Great White sightings in the vicinity). Chatham, like all the towns in that area, sits on sand. Bedrock is six hundred feet down; the whole area is detritus left by a glacier when it went back home a hundred centuries ago. A bit of water can make the land move somewhere else. And here in MA it is illegal to try to do anything to stop it. This is a State thing; try to dump some boulders on your soon-to-be-history lawn, and the State Police will pounce. The newly wet areas aren’t navigable waterways, but they’re still “wetlands” and almost as “sacred” as Indian burial grounds.

Of course, it being Massachusetts, landowners still have to pay property tax on the submerged area.

It’s like the new EU over there on the left coast…extortion to fund political power grab schemes.

Thank that rino fool George H.W.Bush in appointing that other fool Souter to the Supreme Court:

The Supreme Court decision that threatened justices’ own homes
https://www.boston.com/news/national-news/2015/06/29/the-supreme-court-decision-that-threatened-justices-own-homes

Seriously, though, why doesn’t Sessions just order DOJ to drop the case now and not collect the money?