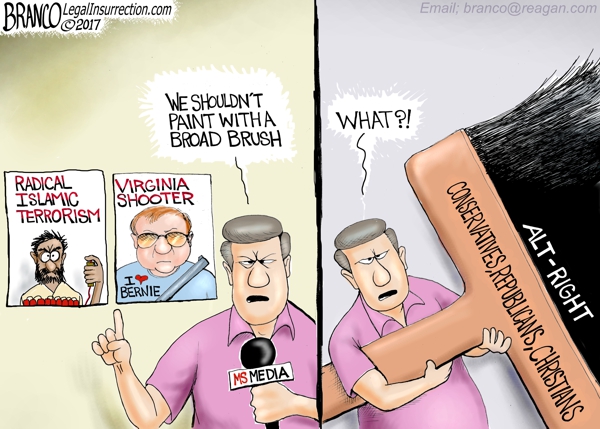 Oh yeah, I think we have a contender in the next Branco cartoon reader poll!

Perfect cartoon to show the hypocrisy of the media. But then Mr. Branco is very, very good at that. Bravo!

Showing hypocrisy that you don’t like is easy. Why don’t you look to your own house?

Here’s an idear. We’ll have liberals and conservatives each expose the hypocrisy on their own side. That should produce better results, right? Idjit.

Meanwhile, that whole “The Nazis are coming!!!! narrative is unraveling. Quote below is in full, complete with coarse language.

Jason Kessler (Organizer of Unite the Right), Currently a White Supremacist, Was Formerly Involved in the Occupy Movement and Was a Full-Fledged Obama Supporter. (self.The_Donald)
https://www.reddit.com/r/The_Donald/comments/6tme1k/jason_kessler_organizer_of_unite_the_right/

Just did some digging and I found out that this little fuck (sic) was a leftist operative until when? You guessed it – November 2016.
According to the Southern Poverty Law Centre, (fuck them, but they’ve done good research into him), Jason Kessler was previously involved with the Occupy Movement and was an ardent Obama supporter through both terms.
https://www.splcenter.org/fighting-hate/extremist-files/individual/jason-kessler (I would have given an archive link, but apparently the SPLC has adopted measures to allow themselves to erase their prior writings.)

He only changed his views in November 2016 (top kek) (sic: for lol), and established his white supremacist group, “Unity & Security For America” in January 2017.
Kessler organized this rally, in a similar vein to prior free speech rallies to get as many Trump supporters there as possible, and went on to invite several neo-Nazi and KKK groups to smear everyone attending.
This is right up the alley of Scott Foval and Bob Creamer, Democratic operatives who organized “bird-dogging” at Trump rallies last year to smear regular Trump supporters as racist and violent.
Jason Kessler should be arrested.
Spez (sic: Edit): He also has several prior charges including assault (as recently as this year), obstruction of justice and failure to appear.
Spez2 (sic: Edit2): Jason Kessler, CNN Assignment Editor, Article “Most New Yorkers Side With Protesters”, October 17, 2011 ARCHIVE THIS SHIT!! Nvm, got it 🙂 (sic)
https://archive.is/xzhwN