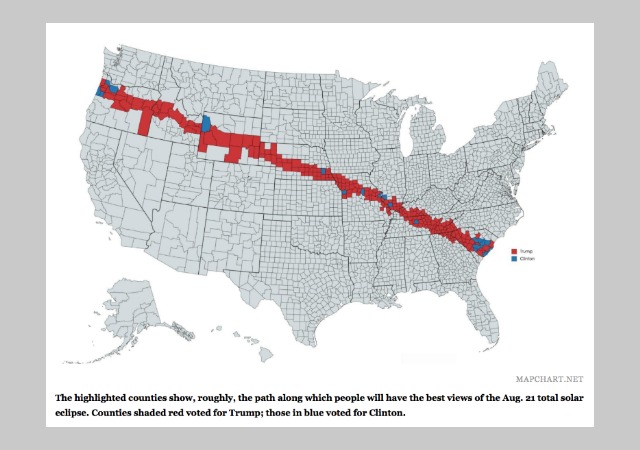 Add this to the annals of This is Why Everyone Hates the Media, Volume Eleventy Gazillion.

In approximately three weeks, Americans in flyover country will be treated to what NASA calls, “one of nature’s most awe-inspiring sights – a total solar eclipse.”

Naturally, that led the Boston Globe to ask, “Is the eclipse throwing shade at Clinton supporters?” 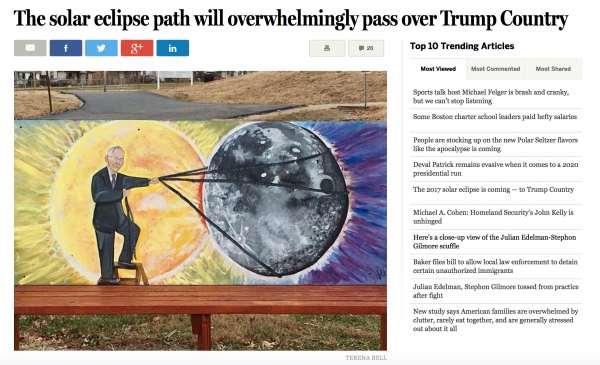 The eclipse on Aug. 21 will be visible to people across the United States, but in most areas, the view will be of a partial eclipse. People will only be able to see a total eclipse if they’re located along the “path of totality,” which will start near Lincoln City, Ore., and end near Charleston, S.C.

Still, it’s not entirely surprising that the eclipse’s path of best perspective could slice through the entire country while mostly avoiding areas that backed Clinton.

While she won the popular vote, Trump won the Electoral College and about 84 percent of the country’s 3,100-plus counties.

Perhaps it’s not a surprise that the solar eclipse is passing over Trump strongholds given that the president himself was born during a lunar eclipse.

On June 14, 1946, the day Trump was born, there was a total lunar eclipse, though it wasn’t visible from the United States, NASA records show. Instead, it could be seen from parts of South America, Europe, Africa, Asia, and Australia.

Who knew the sun was a Trump supporter? Make the moon great again!

I heard that a total lunar eclipse creates a sort of music. Which would mean that President Trump could be described as a “lunar tune”.

Let this be a warning to Hillary supporters. Give up your false God and worship at the altar of Trump. If you fail to do so, the sun shall blacken and you will live forever in darkness.

The path of totality is aprox. 70 miles wide.
If you draw a line that wide across the United States, no matter the direction, will always yield more “red” counties than blue. There is no way on earth to get more blue than red, and it has nothing to do with anything but the fact that Hillary lost almost everywhere.
The media is really really going full retard.

I came here to say this… especially when you are going from coast to coast. The article even points out that Trump took 84% of counties in the country. They should’ve used their beloved popular vote methodology and at least looked at the total number of votes for each candidate in the path of the eclipse, but it is more fun to invent new types of victim hood instead. So take your pick: God/Nature/Science is rigged against them.

There, that should fix it.

Hillary won CA by enough votes to hang on to the total vote.

She won CA by about 4.3m votes but her total overall was only about 2.8m.

Subtracting one from the other shows that she lost the rest of the country by about 1.5m votes.

Hillary bots go crazy when they hear this.

How many millions of those CA votes were illegal?

I’ve heard the band of total darkness has been sold out of hotel/motel rooms for months, causing extreme pricing. Please tip heavily. The Trump Support Band™ appreciates it

And if it were a natural disaster, the free market price rise for rooms allocating them by those wishing to pay would be subject to price gouging laws.

Even the sagebrush flats here in Wyoming are going to be filled up. Stores, like Walmart and the supermarkets have taken on extra inventory. Restaurants and bars are also going to be jammed to the rafters with eclipse chasers. A real shot in the arm for a mildly economically depressed area.

My brother-in-law got a room last week in GA.

“Perhaps it’s not a surprise that the solar eclipse is passing over Trump strongholds given that the president himself was born during a lunar eclipse.”

The Boston Globe might as well start running horoscopes on page 1.

————————suprisingly, i think this is a pro trump piece, they give actual facts showing DJT won 84% of counties country wide. if that dosen’t show wide animus to pantysuit and ‘hope and change for The Donald”, i don’t know what will ever get through to the SJWs changing our once proud Republic.

If the nation had elected Shrillary Shroooooooooo, this wouldn’t be happening, and the celestial lights would continue to shine without interruption. Is that what we’re being told?

On June 14, 1946, the day Trump was born, there was a total lunar eclipse, though it wasn’t visible from the United States,

Lunar eclipses, visible from somewhere on the planet, happen about 4 times a year. For that matter, if you count partial solar eclipses, there’s one of those at least twice a year, often more. So it’s not that rare to be born during one.

So the Moonbats will miss this one. Good.

who pays attention to that rag other than people in The Cult of Useful Idiocy.

Don’t expect the democrat media to ‘change’- lying is what they do. Period. ‘News’ is merely a skeleton for the left to drape propaganda over.

Expecting the democrat media to change is like expecting the crying boehenrs to grow balls.

Trump Won 3,084 of 3,141 Counties, Clinton Won 5. There is no way to draw a west-to-east path across the continental USA without drawing that path mostly through “Trump Country.” Anyone’s who’s viewed a county-by-county election map can see that (even Boston Globe “journalists”):

>> Add this to the annals of This is Why Everyone Hates the Media, Volume Eleventy Gazillion. <<

It was also the fifth most popular trending story at the time the image was downloaded and embedded.

The writer and editor are in the business of farming for clicks. I haven't read the Boston Globe comment section, but I imagine the comments mostly fall into two broad categories: 1) people expressing hatred for Trump and his supporters and 2) a few Trump supporters responding in anger. I'd be surprised if more than 10% of the comments have anything to do with the solar eclipse as a natural phenomenon.

It's an unserious story that manipulates people's emotions in order to gin up ad rates. That is how I analyze every single "news" story anymore.