We hate fascism! But you can’t attend our meeting…. 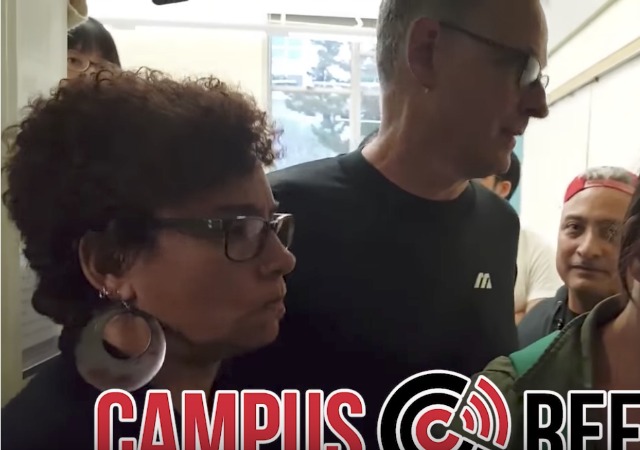 Progressive activist group “By Any Means Necessary” (BAMN) decided to ban the College Republicans at the University of California, Berkeley, from a meeting to plan protests against the alt-right. Pretty ironic that they wanted to plan a protest against fascists and then deny a group entrance.

The College Republicans did not sit back and accept this group squashing their freedom of speech. From Campus Reform:

Video footage provided to Campus Reform by Patriot Warrior Media shows activists obstructing the entrance to an event hosted on the public university’s campus by BAMN, a “coalition to defend affirmative action, integration and immigrant rights and fight for equality by any means necessary.”

The event was advertised on campus with flyers inviting students to attend a “meeting on shutting down and defeating the fascists and building the movement to get Trump out,” and was specifically intended as a planning session for antifa-led protests scheduled for this weekend.

The flyer also outlines several policy positions that BAMN is seeking to promote, focusing heavily on its support for unrestricted immigration.

“Make California a sanctuary state!…Full citizenship rights now for all immigrants, refugees, and asylum seekers!” it proclaims, followed by demands to “abolish the Electoral College” and provide “universal healthcare for all in California and the nation!”

When the Republican students attempted to enter the room in which the meeting was being held, they were instantly turned away by the BAMN members, who disparaged them as “Nazis” and baselessly accused them of inciting violence.

The visitors, however, insisted that the access to a public event on a public university cannot be denied to a select group of students based on their political beliefs.

Visibly present at the meeting was Yvette Felarca, a Berkeley middle school teacher and BAMN leader who is currently free on bail after being charged with inciting a riot and felony assault by means of force likely to inflict great bodily injury in late July.

The conservative students protested that Felarca should not be allowed on campus while she awaits trial, but a police officer who arrived several minutes into the standoff told them that this was not the case unless she has specific restrictions on her bond.

… good for CReform, make the fascists show their true colors..

Saint Cesar Chavez, California’s patron saint of immigrants and migrant workers, reported illegal immigrants to immigration authorities to have them deported because they took jobs from and depressed the wages of his UFW members. That makes him sound like some kind of white supremacist, fascist Nazi, or worse yet, a Republican. That’s the story which should be told on the next Cesar Chavez Day state holiday.