“[Free speech] is being attacked by so called peaceful protesters under the name anti fascists.” 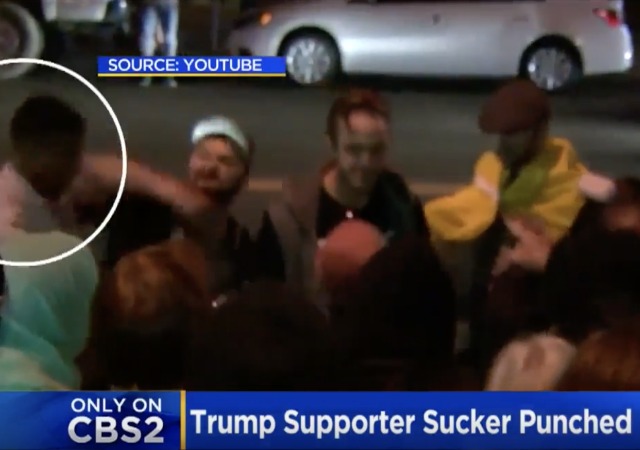 Officers in Laguna Beach have arrested Richard Lousy who allegedly sucker punched a black Trump supporter at a rally on Sunday. R.C. Maxwell told FOX 11 the attack was unprovoked:

“If the optics were completely different and I was a black lives matter supporter and I was attacked on the Trump side of a protest I would be in the spotlight on CNN right now,” Maxwell said. “I went over to the left side to see if I could engage them with dialogue and I was instantly encircled by the so called anti fascists.”

“I think the fact that I’m a black conservative causes a lot of problems for the left side because there’s no way they can really resolve that according to their narrative of what they think trump supporters are, so I think that was a bit triggering to the other side,” Maxwell said. “I was getting lots of specific comments like you’re a sellout, you’re an Uncle Tom.”

FOX 11 even tried to interview Maxwell at the protest:

Shortly after the interview began, Maxwell was surrounded before being verbally harassed.

“I was in a pinball machine full of Antifa, it was a little scary but I was being bold and not adversarial,” Maxwell said. “You just wanted to ask me a couple questions about what was happening and we couldn’t even conduct an interview. “Dialogue is being shut down and free speech is being attacked and it’s being attacked by so called peaceful protesters under the name anti fascists.”

FOX 11 reported that Losey even boasted of his attack on Maxwell on Twitter and admitted he did it because Maxwell “wouldn’t stop talking about Trump.” When one person on Twitter called for Losey’s arrest, he replied, “arrest me, lmfao [laughing my fucking ass off].”

CBS Los Angeles said that the attack made Maxwell sore, but also gave him more determination to speak out and fight for Trump’s agenda.

This sounds like it could be an opening for federal “civil rights” charges … complete with confession, even.

If handled right, this could crack the whole “antifa” brownshirt thing wide open.

Civil Rights Commission just declined to add a statement about the Antifa… the majority (dems) stated the Antifa were just exuberant in their defense of morality.

What alaskabob said. The FedPig swill aren’t about to touch a Communist terrorist. Any more than the Charlottesville pigs and the Virginia State pigs could bother to do so.

Have to wait …. Feds video taped the Charlottesville demonstration.. it all boils down to freedom of information and what is not “lost”. I would be a little more comfortable now with that video not being in a Dem Keiretsu.

Won’t happen with Session’s asleep at the wheel.

Shut up. Nobody deserves that, ever, and it is not a joking matter.

Good. The nutter thug should be prosecuted and given time behind bars.

conservative activist guy goes up to pack of nutters with a camera crew and “engages” them. Is he “innocent”? Or was he a provocateur?

What was the object of the whole deal? A dialog? Or fireworks?

Yep. He dared to stand up to them. Did he deserve to be attacked in RagsWorld?

No. Of course not.

But I am a keen observer of human nature, and I know that opportunists take advantage of turbulence.

Do you contest this?

Are you saying that no one any longer has the right to peacefully confront those of a differing opinion because that constitutes incitement? This is nothing more than another way to deny free speech and forms a slippery slope should you try to justify the stance.

I have a perfect right to exercise my right of expression.

I have a right to mouth off to a LEO during a traffic stop.

I have a right to shout insults at a drunk in a crowded bar.

And young Mr. Maxwell had a right to walk up to nutters “to ask about what was going on”.

Now, in no instance does anyone have any right to use violence. But you’d be irrational not to see that the speech in each instance probably would entrain a series of events that culminated in a physical confrontation.

Now, I DO understand there is a “heckler’s veto” problem somewhere along this continuum. On the one end you have simple politeness that instructs our speech, including whether we use it at all. On the other end, you have the case where you are cowed into silence by intimidation. And somewhere in the middle, you have situations where a smart person without a camera crew will not approach nutters to “ask what’s going on”. Because you can predict the outcome AND your rights to expression are fairly insignificant in asking “what’s going on”.

Note (I hope) the difference between Charles Murray being prevented by a riot from speaking on a university campus.

I subscribe to Robert Jordan’s philosophy on this of, “Take what you want, and pay for it.” If you want to burn an American flag at a Marines convention, go for it. You will get the come-to-Jesus that you requested, and should not be surprised by it.

I think Maxwell was being cynical about anti-first-amendment protestors, assuming that his presence would provoke them, and that he would get the ensuing violence on camera. Cynical but smart. This uses the left’s methods against them by doing something that’s neither illegal nor immoral, just perhaps unwise.

So now Maxwell has a club with which to beat antifa about the head and shoulders (rhetorically), and one of the criminals facing the process of the criminal justice system, where the process is, at the very least, a big part of the punishment. Reasonable Americans see the video and think poorly of the criminal, and by association his criminal friends.

If you can take the beating, it sounds like smart politics.

The perp’s name is Lousy. Hollywood couldn’t write this stuff.

I did it because he would stop talking about Trump when all of us told him thousands of times we didn’t want to hear it. I am NOT racist.

Losey is just as good as Lousy.

How ironic that on this post LI has censored the comments.

Just in case Maxwell reads this. Thanks for taking one for the team.

Sums it up perfectly.