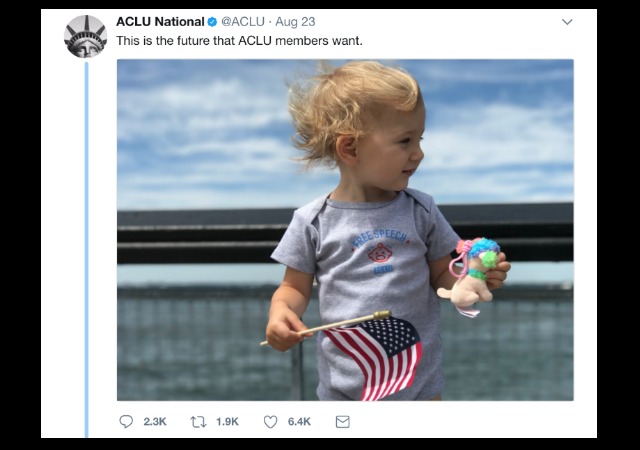 In one of the dumber things to have happened this week (and that’s a title that’s increasingly difficult to bestow), the ACLU sent what to most normal people would be a perfectly acceptable tweet.

This is the future that ACLU members want. pic.twitter.com/bAIwuheEco

But because this is a garbage time to be alive, a handful of individuals thought that the ACLU’s choice of a white child meant the organization was perpetuating racism.

A White kid with a flag?!

To which the defenders of “civil liberty” which ought to include free speech, then apologized for perpetuating white supremacy:

When your Twitter followers keep you in check and remind you that white supremacy is everywhere. pic.twitter.com/Qx5D5hbKWy

Black and brown children? Sure. White child? YOU ARE CLEARLY A PROPONENT OF WHITE SUPREMACY.

What a pleasure to see such a good looking, happy, child.

Looks nazi to me

The ACLU should be shut down immediately. They admit to being racist and there is no alternative for racists.

The word is kowtow, not “cow tow”.

Just when I thought the ACLU was regaining its senses and returning to the force for good that it was until about 2000.

“dumber things to have happened this week” Trump is in competition every week and usually wins.

I am not talking about saying something like ‘May 11, 2017 – “It could be my fault. I don’t want to necessarily blame but there’s a great meanness out there that I’m surprised at,” Trump said when asked ..’

What was the ACLU wrong about?

First of all, there was NOTHING wrong with the initial ACLU tweet. What is more innocent than a small child, of whatever race. What the ACLU did was to adopt the unreasonable position of those critical of this tweet that it was somehow racist because the small child pictured therein was white [though he could have been Hispanic as being a Hispanic is based solely upon the linguistic heritage of the person, not the racial heritage]. So, what the ACLU proved is that it has no moral or ethical center and will simply follow the liberal flock no matter where they go. This is a significant departure from its traditions as a principled organization which stood up for the rights of ALL people in this country. And the ACLU has not backed down from their position of denying representation to anyone exercising his 1st Amendment rights while armed, even if the person is doing so peacefully. So, I’m afraid that hold the ACLU as some paragon of virtue here.

Sorry for the typos. The line:

” So, I’m afraid that hold the ACLU as some paragon of virtue here.”

should read: ” So, I’m afraid that holding up the ACLU as some paragon of virtue is inappropriate, here.”

It takes a very small man to “admit” he was wrong when he wasn’t, and to apologize for doing the right thing. The original tweet was beautiful, and the correct response to the criticism would be contempt; the apology was ugly and evil, exactly like apologizing to nazis for saying something nice about a Jew, or to the KKK for saying something nice about a black person.

What was the ACLU wrong about? What did they admit? It’s not clear in their response.

The ACLU did not admit it was wrong. It merely succumbed to pressure to adhere to a party line that it crossed. Crossing the line is a wrong per se, but not necessarily (and actually not, in this case) wrong in any objective way.

What they did was cravenly, not anything to admire. Instead of saying, “Oh, STFU, not everything white is racist,” they caved in.

What ever liberals are in charge of for long enough, they devalue and degrade. Even their own. This organization is now wallowing.

The future is blonds?

The ACLU is trying to regain its progressive bona fides with its primary clientele. The cost of defending freedom of speech is getting more costly than defending freedom from speech. Frankly, my comfort level is coming back knowing I can trust the ACLU to not be trustworthy with essential freedoms. No use having them watching your back with false confidence.

The many shades of color diversity. There is no black or brown in a rainbow. And white is divided into its constituent components. There is no way to reconcile this convoluted mess.

I fear for the collective sanity of the Republic, when every single thing in daily life, whether overtly political or not, is made the subject of a sort of obsessive hyper-scrutiny and ideological purity test. There is a decidedly unhealthy and ominous fascistic tenor to the notion of a 24/7, ceaseless parade of virtue-signaling, contrived and self-congratulatory moral superiority and overwrought outrage over the most transparently innocuous conceits.

This well not end well.

“Sometimes a kid is just a kid.”

Those chillins with flags. Aren’t they the cutest little things?

Shortly after Rick Santelli’s rant that led to Tea Party types beginning to start thinking about considering pondering and imagining political involvement, that is the very onset, there appeared streaming past my front door downtown Denver very odd people. Very odd. I’d characterize them as typical Walmart shoppers. Not my type of folks, actually. And that’s very strange as all Walmart stores are away from downtown. So i followed them. Naturally. I didn’t even know where they were going but we ended up at the capitol a few blocks north. I was stepping out with my camera backpack. I didn’t even know how to use it The walk was for camera practice.

I listened to their speeches all about not caring for politics but being shoved into action by shock with their children’s future snatched from them right before their dismayed eyes. They were horrified. They were concerned about debt. Exclusively. The whole thing was about fiscal responsibility.

At the end of it I got a great photo of a darling little boy holding a flag stoically and proudly. The flag had some kind of incipient meaning to him that transmitted very nicely. His sister is with him sitting on the capitol steps. The back steps. Care to see it? The rest of the album is photos of the speakers and the crowd that showed up. I don’t even know how they knew to assemble, when and where. It’s still a mystery to me. Where in the world do these people get their information?

Denver is liberal, you know. On the whole, the city voted for Hillary over Trump and before that very pleased to host Obama chosen as candidate. You’d expect them to not get overly worked up about July 4th, how gauche, but that would be wrong. In the same area, a park on the other side of two broad dividing streets, a city celebration is hosted each year. People are given little American flags with LED lights in the handles. The kids just love those things. And there are thousands and thousands of them given away. The whole place is crawling with children learning about our Independence day. Would you care to see the album and all the adorable little chillins with flags?

What next, th Allman Brothers will be deemed white supremecist because of their album art?

What message were The Beatles trying to send with their White Album?

And, predictably, it has done its best to undermine our freedom while falsely cloaking itself in as a “civil liberties” organization, corrupting the young and idealistic, and taking advantage of the emotional weakness of wealthy liberal useful idiot narcissists.

So what else can we expect from them but to cut our throats?

ACLU founder Roger Baldwin’s candid vision:
“I am for socialism, disarmament, and, ultimately, for abolishing the state itself… I seek the social ownership of property, the abolition of the propertied class, and the sole control of those who produce wealth. Communism is the goal.”
https://townhall.com/columnists/mattbarber/2011/03/25/aclu-communism-is-the-goal-n1167720

Then there’s this idiot:
McConnell ‘Most news is not fake
http://www.politico.com/story/2017/08/21/mitch-mcconnell-trump-fake-news

Left or right, the ‘establishment’ is out to get us.

As social worker, veteran, husband and father of five multi-ethnic children all I see is a cute child, holding a flag and happy meal toy while wearing an ACLU onesie. Cute kid and there ought to be nothing wrong with hoping ALL children grow up waving the American Flag, supporting freedom of speech and well. . . .maybe are cute! I mean, I wanna live in Lake Wobegone where all the, “women are strong, men are good looking and children are above average”!

Personally anyone that sees this photo as racist truly need psychiatric help. It’s a child and as we’re often reminded by the very same liberals who are outraged, “children are taught hate, not born with it”. Clearly those offended adults are incapable of keeping themselves from passing on hate. Sad.

Well, don’t you know that your “white privilege” is exactly why you fail to recognize that this tweet unconsciously shows that the ALCU promotes the inherent white power structure of society. The ACLU obviously wants its supporters, workers and membership to be exclusively white, and any other interpretation means you can’t see that you’re obviously a racist.

The ACLU can’t take the chance that they even partially get painted with the “white supremacist organization” brush. As an organization it is too dependent on it’s reputation as a liberal defender of freedom to get their proposed outcomes over the finish line with Judges that don’t actually READ and analyze the drivel that they usually put forth as Amicus briefs.

The first paragraph should have [Sarcasm] and [/Sarcasm] tags.

The ACLU is beginning to experience how Robespierre felt. When you call everything racist it comes back to bite you.

I must confess my crimes..I love Homemade Vanilla Blue Bell.

How do they know that child is “white”?

Looks mixed with a bit of a tan to me. Bet that hair ends up brown by the time they’re 12 too.

This is the problem with “the brown paper bag” test – people literally start judging people by the color of their skin, not the content of their character *or* genetics.

MLK is rolling in his grave.