A Few Liberty U. Grads Will Return Diplomas to Protest Trump

A Few Liberty U. Grads Will Return Diplomas to Protest Trump 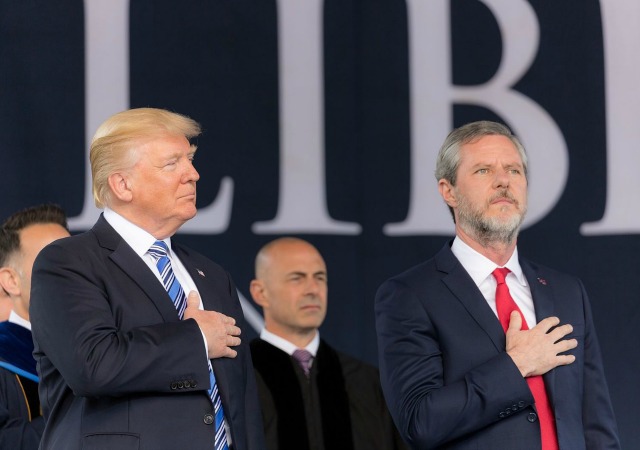 Some Liberty University graduates have decided to return their diplomas to the university as a way to protest the school’s President Jerry Falwell Jr.’s support of President Donald Trump, especially after Trump’s remarks after Charlottesville. From NPR:

Chris Gaumer, a former Student Government Association president and 2006 graduate, said it was a simple decision.

“I’m sending my diploma back because the president of the United States is defending Nazis and white supremacists,” Gaumer said. “And in defending the president’s comments, Jerry Falwell Jr. is making himself and, it seems to me, the university he represents, complicit.”

Trump has been criticized — including by many Republicans — for a series of statements after an anti-racist counterprotester was killed by an alleged Nazi sympathizer who drove his car into the crowd.

Trump initially responded by blaming “many sides” for the violence, and then made a statement condemning white supremacists, before eventually giving an off-the-cuff statement in which he claimed that there were “very fine people on both sides.”

Falwell responded the next day with a tweet praising Trump’s statement and adding, “So proud of @realdonaldtrump.”

In a group letter being prepared to be sent to university officials, several alumni declare their intention to return their diplomas and call for Falwell to repudiate Trump’s remarks:

“While this state of affairs has been in place for many months, the Chancellor’s recent comments on the attack upon our neighbors in Charlottesville have brought our outrage and our sorrow to a boiling point. During the Unite the Right rally in Charlottesville, white supremacists, nationalists, and neo-Nazis perpetrated brutal violence against anti-racist protesters, murdering one woman and injuring many. Instead of condemning racist and white nationalist ideologies, Mr. Trump provided equivocal and contradictory comments. The Chancellor then characterized Mr. Trump’s remarks, which included the claim that some of the persons marching as white nationalists and white supremacists at the rally were ‘very fine people,’ as ‘bold’ and ‘truthful.’ This is incompatible with Liberty University’s stated values, and incompatible with a Christian witness.”

Georgia Hamann, a 2006 alumna and an attorney in Phoenix, Ariz., helped pen the letter.

“We’re asking that Liberty University return to its stated values and accept that the pursuit of power is leading it into some dark places, and really repudiate that,” she said. “The word in Baptist and evangelical circles is ‘repent.’… You know, truly a turning away from wrong conduct.”

Alumni who can’t find their diplomas are being asked to sign the group letter or write individual letters to Falwell expressing their concerns.

They just as well, they didn’t learn anything.

What a totally meaningless gesture. Now if they refused to accept or resign their degree that would have real meaning.

A diploma is a totally useless piece of paper that looks pretty when framed frame, especially if it has a big gold seal and bright blue ribbon. I have several degrees, even post graduate ones. I have, or had, diplomas for all of them. I even had nice sheets of parchment attesting to my certifications to practice in my chosen profession. These degrees have been very rewarding to me over my lifetime. They opened up opportunities which would otherwise be closed to me if I did not have them.

But as for all that framed parchment, It got boxed up decades ago, I wouldn’t know where to find then even if they still exist. I could have shredded or burned those parchments the very day I received them and my life would have been no different than the way it had occurred.

This is the K-Mart version of John Kerry throwing his medals or somebody else’s medals or some fake medals (depending on which lie of his one chooses to believe) over the whitehouse wall in protest of something.

Note: Later he begged the Navy Secretary under Reagan to give him his medals back.

I always heard that he threw someone else’s medals away, and not is own.
So your post prompted me to look it up.

CNN (yeah, I know, what does *that* prove) states that he only threw his RIBBONS away, and tossed someone else’s medals away

Pressed Monday about whether he had ever misled people on what he threw away, Kerry rejected the charge. He said there was “no distinction” between medals and ribbons, and stressed the symbolic nature of the protest.

“We threw away the symbols of the war,” Kerry told ABC Monday from a campaign stop in West Virginia.

“However, in 1984, according to ABC News, during Kerry’s first campaign for the Senate, he took a labor leader to his home to show him the medals, because labor was uneasy backing a Democrat who had seemed to demean the service of those who had fought in Vietnam. This was the first time, according to ABC, that Kerry admitted that he still had the actual medals that he had implied he had thrown away in 1971. Apparently, the existence of the medals satisfied the labor groups in Massachusetts, and he received their endorsement.

But what do we have at the end? Once again, Kerry is trying to have it both ways. In 1971, he threw away his ribbons to protest the war in Vietnam, implying that he had actually thrown away the medals. But in 1984, he uses the medals to demonstrate to labor that he did not really do the symbolic act that he performed in 1971. In other words, that throwing away his ribbons was not the same thing as throwing away his medals. If this sounds a lot like “I voted for it before I voted against it,” you’re getting warm. ”

Alumni who can’t find their diplomas

Should be easy to find … they’re probably at the bottom of the bird cage, right where they left them.