First American male in a Grand Slam semi-final since 2009. 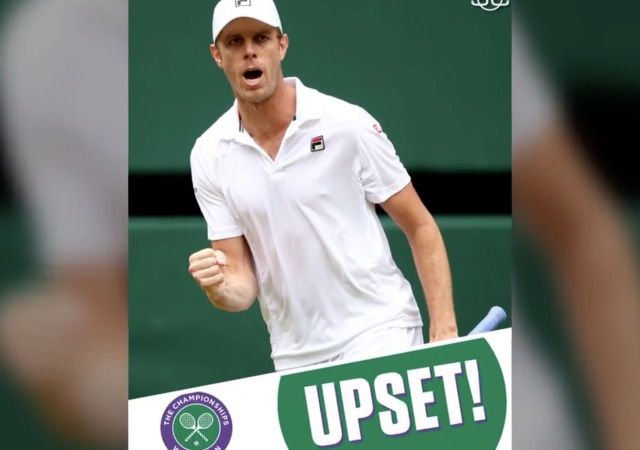 Anyone who knows me knows Roger is my man, but nothing could thrill me more than having Querrey in the semi-final. He is the first American male to land in the semi-final of a Grand Slam since Andy Roddick made Wimbledon semis in 2009. From ESPN:

“I’m really proud. It’s an exciting moment,” Querrey said. “Not many people get to play tennis professionally, let alone play at Wimbledon, play on Centre Court, play against Andy Murray. It’s something that few people get to do, so it’s really special.”

Murray’s preparations for the tournament were hindered by a sore hip and although the 30 year old had previously downplayed the seriousness of the issue, the problem finally took its toll on him against Querrey as he dropped 12 of the last 13 games in the final two sets.

“The whole tournament I’ve been a little bit sore,” Murray said in his postmatch news conference. “I tried my best right to the end. I gave everything I had. I’m proud about that.

“But it’s obviously disappointing to lose at Wimbledon. There’s obviously an opportunity there. So I’m sad that it’s over.

“Sam served great. The end of the fourth set and fifth set, I felt like he hardly missed any first serves. He was acing me pretty much every time. I wasn’t getting enough power on my serve to put him in any bother there. So he was dictating all of the points.”

This was Murray’s first tour-level loss to an American player since he was beaten by Alex Bogomolov Jr. in Miami in 2011, and it also means he could lose his place at the top of the world rankings should Novak Djokovic win the title at SW19.