Wildfires rage across the Western U.S.

Wildfires rage across the Western U.S. 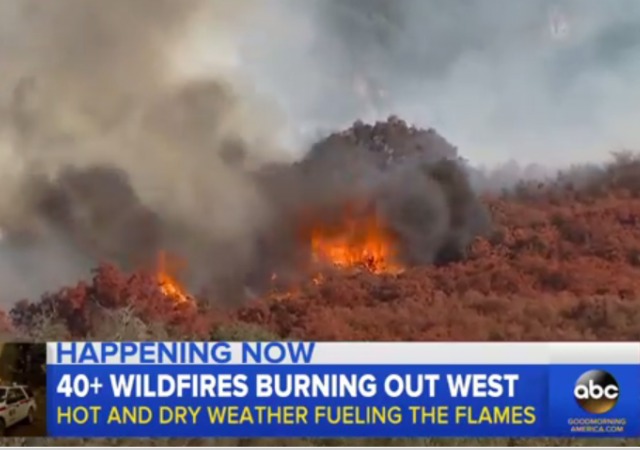 More than forty wildfires are raging across the western U.S., fueled by high temperatures and dry conditions.

The National Weather Service early on Monday issued red flag warnings, signaling critical conditions over the next 24 hours, for regions in at least six states. In some areas, firefighters have been battling fires for a week, trying to keep them from spreading across roads and churning through dry vegetation near populated areas.

The states most impacted are:

Additionally, wildfires have also been reported in New Mexico and Idaho. In the Golden State, conditions are so bad that the Mercury News asked: Is California on Fire?

As of July 9, Cal Fire crews had battled 2,900 fires burning more than 106 square miles. That’s more than twice as much area burned as the average this time of year, which is about 2,500 fires covering 42 square miles.

“We’re well above the average number,” said Cal Fire spokeswoman Heather Williams, who said the amount of burned area skyrocketed in the past week when “we went up drastically. We saw 488 new fires just last week, while statewide, with all departments reporting, we had 633 new fires. So you see how quickly things can change.”

The Whittier Fire, just five percent contained by late Sunday, is threatening the college-crashpad community of western Goleta, just west of UC Santa Barbara. Firefighters over the weekend were able to quickly stamp out a blaze in Morro Bay that had reportedly been set off by two sky lanterns, or floating candles. And some 5,400 structures are now in the path of the Wall Fire in and around Oroville, a beleaguered town already threatened by, yup, that big ol’ leaky dam.

The Whittier Fire destroyed a Boy Scouts camp, killing all of the animals in its nature center.

“While this fire is utterly devastating, those that hold true to the magic and wonder that this place has instilled in our youth will continue to inspire for years to come,” the Outdoor School said in a statement.

Governor Jerry Brown declared a state of emergency, as has Arizona Governor Gov. Doug Ducey. Though the state is now getting some monsoonal relief from its record-setting temperatures of last week, several blazes are still threatening the public.

One fire in Nevada, close to the California border, shut down Interstate 80 on Monday night.

The Farad Fire has burned about 500 acres in Sierra County, about 12 miles northeast of Truckee. It is only 5 percent contained.

Officials say the fire is pushing east and back toward the highway.

I-80 at Gold Ranch has been shut down until conditions improve. There was no estimated time for reopening.

I-80 remains closed in both directions from the Nevada State line to Hirschdale.

Nevada crews have had better luck withe other blazes:

Officials say they expect crews on Monday to also complete control lines around a 65-square-mile (168-square-kilometers) fire northeast of Sparks and a blaze near Palomino Valley that grew to at least 7.5 square miles (19 square kilometers).

Prayers for the safety of the firefighters, as well as more monsoonal moisture.

Funny thing about weather is that here in East Texas, it’s been unusually cool and wet, kind of like late spring. Now when I say cool, that’s a relative term – it got up to about 93 today, but this is when we’re usually looking at getting close to the 100’s.

Great. Not that there are any fires where I live (yet) but there is smoke coming over/around the mountains. Then I look over at Prescott Valley AZ where I am planning on moving to in the next 1-2 years and they are surrounded by fires. If I moved to Idaho, I expect that they Yellowstone super volcano would erupt. There is no escape. Come and get me.

Here in northern NM it’s been a hot, dry, summer so far. Storms roll through in the afternoon but any rain is brief and very spotty. Unfortunately, the lightning is more abundant than the rain. We have three fires within the district but they’re not threatening “civilization” and they’re in locations that have allowed them to be contained. Rain is in the forecast for later this week but weather forecasts are constantly thwarted by the mountains. There’s just way too much fuel on the ground and though they’ve been doing controlled burns for the last decade, all it’s going to take is one good lighting strike on steep terrain for things to get out of control fast.

Wish we could send all of you some of this midwest rain.

One of the wettest spring and summer I can remember in 45 years of working outdoors.

I am waiting for the papers to start blaming Trump and the Republicans for this.

Wow. Wildfires in Kalifornia in the summer. Yawn. Same stuff every year.