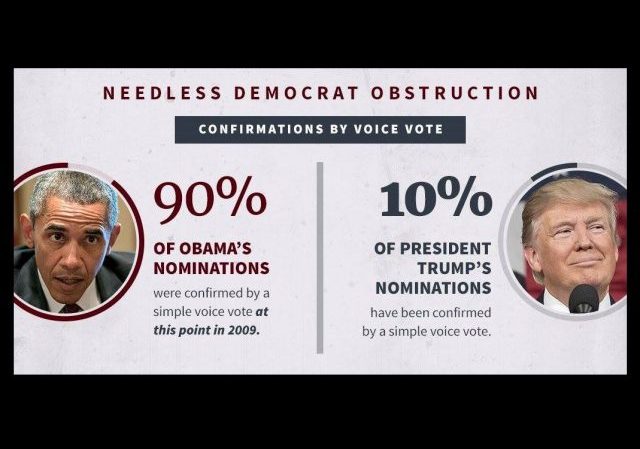 I pointed out recently that when it comes to judicial nominees, Republicans on the Judiciary Committee have signaled that they will do whatever it takes to get the nominees through the process over Democrat delay tactics.

As to judicial nominees, the slowdown tactics include Democrat Senators refusing to return so-called “blue cards”:

No Democrat has yet returned a “blue slip” signaling acceptance of President Trump’s federal judicial picks — an ominous sign for Republicans, who fear it signals an upcoming attempt to slow-walk the administration’s plans to reshape the federal judiciary….

The issue is about to come to a head, as Senate Republicans will soon have to decide whether to proceed with several key circuit court picks over the reticence of home-state Democratic senators.

Senate Judiciary Committee Chairman Chuck Grassley, Iowa Republican, has signaled that he may alter adherence to the blue slip policy, which is a tradition giving senators a sort of veto over judges picked from their home states who don’t meet with their approval.

The White House released the graphic in the Featured Image, and a range of statistics on the obstruction, including the following:

Trump’s four predecessors were at least three times faster than the current president at getting their nominees into their desks. Some 49 of Trump’s key nominees have been confirmed as of Thursday, according to the Partnership for Public Service, a non-partisan group that tracks more than 500 key appointments. That’s compared to 201 for Barack Obama, 185 for George W. Bush, 196 for Bill Clinton and 148 or George H.W. Bush….

Trump’s team says there is a renewed effort in place to nominate picks more quickly, noting the administration now has 150 nominations in the queue waiting for a Senate hearing. “And there are a lot more in the pipeline,” said Marc Short, the administration’s legislative affairs director.

Short blamed Democrats for slowing many of the nominees with cloture votes — or forcing 30 hours of debate and an up-and-down vote — for nominees that are not controversial, including a judge this week who was eventually confirmed 100-0. Another pick was confirmed 97-3 after a cloture vote was called.

The administration has already faced 30 cloture votes. That’s more than any Congress since 1949 other than in 2013, after Obama was re-elected, according to the Pew Research Center.

In addition to requiring cloture votes and debate, Politico points out Democrats have invoked other rules that normally are waived by agreement:

A senior Democratic aide said the party was deliberately delaying nominees because of the president’s approach and policy agenda and would also continue to invoke the “two-hour rule,” which keeps committees from meeting longer than two hours. This person said there was no benefit to having more of Trump’s people in place.

“We are not going to consent to time agreements while Republicans are trying to jam through a health care bill,” the aide said.

It makes no difference that Trump hasn’t nominated as many people at this stage as other presidents — even if he had, the slowdown would not produce more confirmations.

As much as Republicans opposed Obama, they never engaged in this type of deliberate delay to prevent the Obama administration from staffing.

It’s time for Republicans to consider changing the rules that allow Democrats in the Senate to prevent the transition of administrative power after an election.

Just before the summer recess, hold a single quick voice vote on all the remaining nominees.

There will (of course) be an objection, because this can only happen with unanimous consent, at which time you can be almost certain that several moderate Republicans will jump the line into No because of some reason or another.

Far easier for Trump to hold a press conference about ten minutes after the Senate recesses and announce, “Due to unprecidented obstructionism in the Senate, I am recess appointing the 827 nominees I’ve submitted so far that have not gotten a vote. This gives the Senate a year to debate and vote on them, which should be plenty.”

The only problem with that is that there are so many, many slots that have…and DO today…remained unfilled by Mr. Management and his administration.

So a recess appointment would still leave a bunch of vacancies.

Only one problem: the rats of the GOPe.

All the GOP needs to do is make the summer recess an actual recess, then Trump can turn all his nominees into recess appointments.

Blame is mostly on McConnell. He has all the tools, but won’t get the job done.

I wish Matt Bevin had been able to oust him in the 2014 primary. He’s a real disappointment.

I am utterly SICK of Democrats.
Period.
Full stop.

AND their GOPe enablers.

The Dems never come up with any new tricks. But with Republicans as opponents, they don’t need to.

Since the filibuster isn’t in the Constitution, neither are cloture votes. Those are Senate rules. Harry Ried blazed the trail demonstrating how to change the rules on a simple majority vote.

That which is abused can be taken away.