Ran into enemy fire for 48 hours. 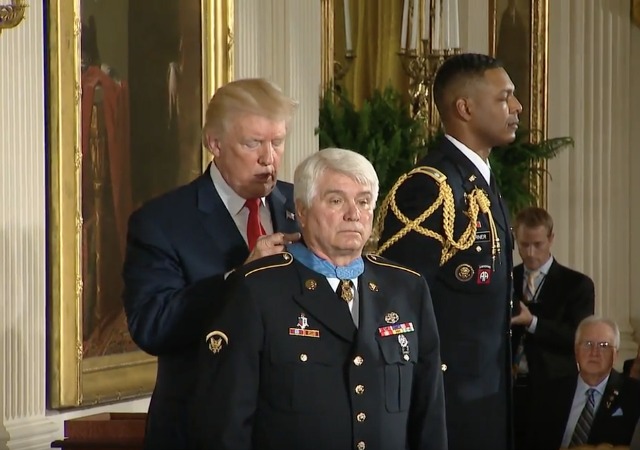 In 1969, 23-year-old James McCloughan served as a private first class combat medic in the U.S. Army in Vietnam. But at Tam Ky, the enemy constantly fired upon his unit for 48 hours.

McCloughan did not stop fighting. He risked his life and managed to save 10 fellow soldiers on nine occasions during those two days.

For that heroic behavior, President Donald Trump awarded McCloughan with the Medal of Honor.

The Chicago Tribune described what happened that day:

The operation began May 13, 1969. That morning, elements of McCloughan’s unit — Charlie Company, 3rd Battalion, 21st Infantry, of the 196th Light Infantry Brigade — were flown into the foliage near Tam Ky, a city along Vietnam’s central coast. They came under immediate attack, and two U.S. helicopters were shot down.

“It was a hot LZ,” McCloughan said in his interview with the Army. He was referring to the helicopter landing zone where he and the others were unloaded. “The minute that we got there, we were fired upon.”

McCloughan joined a squad of soldiers sent to locate one of the helicopter crews, according to the Army’s summary of action for his Medal of Honor. When they arrived at the crash site, he spotted a soldier too injured to move. As his squad mates exchanged fire with North Vietnamese, McCloughan sprinted to reach the man, hoisted him onto his shoulder and carried him to safety.

Later, McCloughan’s platoon sustained heavy casualties when they were ambushed by a larger North Vietnamese force while scouting a nearby hill. With U.S. airstrikes falling nearby, he left his weapon behind and ran toward two unarmed soldiers who were pinned down.

While assessing them for injuries, McCloughan was sprayed with shrapnel from the blast of a rocket-propelled grenade. He carried the men to safety despite his wounds.

McCloughlon ignored his commander’s orders to stand back, determined to rescue the soldiers. On the next day, the unit lost medic Pfc. Dan Shea, who was shot as he carried a wounded soldier. The government recognized him posthumously with the Medal of Honor.

This left McCloughlon as the unit’s only medic and he did not stop doing his job, despite receiving injury after injury.

The enemy amped up the attack, but McCloughlon refused to stop:

He encountered a soldier who had been shot in the stomach, patched him up as best he could and “carried him like a baby” into a nearby trench where he would be safe. A machine-gunner had been shot through the shoulder. McCloughan treated him and moved him to the trench. There were four or five others in really bad shape, he recalled. McCloughan brought them into the trench too, hopeful they could be saved.

That night, when the soldiers had run low on ammunition, McCloughan volunteered to crawl into the open carrying a light so a helicopter carrying their gear could locate them. But the resupply never came. He continued to treat casualties into the next morning, helping fend off attacks and keeping two seriously wounded soldiers alive. At last, that afternoon, he helped gather the dead and wounded so the unit could be evacuated.

After the war, McCloughan returned home and taught psychology, sociology, and geography at South Haven High School in Michigan for 40 years. He also coached football, baseball, and wrestling.

Michigan inducted him into “numerous state Halls of Fame, including the Michigan High School Coaches Association Hall of Fame and the Olivet College Athletic Hall of Fame.”

From all of us at Legal Insurrection, thank you for your service Pfc. McCloughan.

It took 48 years for him to receive the CMOH?

Obviously, it’s more important that transgendered people get in the military. /sarc

i pray his heroism, bravery & selfless service inspired more than his fellow veterans, but that it made/makes a deep impression on those he taught, coached & loved.
these are the type of teachers we need in all areas of education today… to help the melting of snowflakes continue..

I put this on the sane plain as today’s gitmo terrorists who are getting multi-million dollar payoutsbecayse they are in gitmo getting fed and watered daily.

Meanwhile it too the British nearly 40 years to pay British soldiers who were prisoners if Japan from WWII compensation and only then it was about £30 and the majority had already passed away!

Secondly, just an observation bit has anyone noticed who the majority of recipients (this is true for the VC too) are getting rewarded for saving lives? It seems people aren’t being recognised for killing the enemy anymore??

Recommend you review the citations of the most recent recipients of the MOH. Plenty of killing going on. And who says that a medic braving withering fire isn’t deserving of the MOH?

Interesting list. Excluding WWI and the Civil War the majority of the citations are for saving lives.

I want to know the hoops they had to jump through to get that Spec5 rank insignia for the new blue uniform.

My thoughts, exactly. I know that there is a formal review process for potential award-winners which takes time, and, I’m not suggesting that they hand these things out like candy, but, why must those former servicemembers who are deserving of recognition wait so long to be recognized? It’s especially galling where the award is awarded posthumously.

It’s like the Veterans Administration is in charge of this process, what with the glacial pace at which it moves.

Takes so long because no one cared at the time, then in the intervening years. Pres Obama cared enough for photo ops. The ball was rolling in various service record reviews and finally McCloughan name came out. He might even be happy that he got President Trump to award him the medal vs Obama. 😉

While the private’s actions were highly commendable and deserving of the Medal, he did, essentially, disobey a direct order of a superior officer to go out and “rescue” two of the men. Rather than face discipline for an Article 90 violation, his commanders chose to ignore the incident.

Service in the military is not a hippy love fest, especially in combat. While personal initiative is encouraged and welcomed, adherence to direct, lawful orders is necessary to ensure that the military mission succeeds. If a platoon refuses to hold a position and unilaterally decides to maneuver on its own, this can lead to the loss of a significant force, a necessary position, a battle or a war.