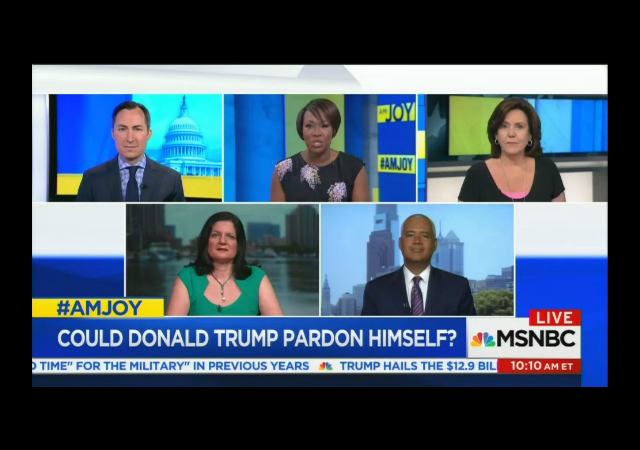 When Joy Reid and her merry band of liberals sink their teeth into something, it’s hard to tear them away.

Last month, we entertained you with this item about Reid & Co. mentioning “Russia” 56 times in one hour.

On today’s AM Joy, the word was “pardon.” No Groucho-like duck came down, but Reid and her panelists pored interminably over the pardon possibilities. We counted 32 “pardon” mentions in the 14-minute segment. Naturally, the panel was horrified at the prospect of President Trump pardoning himself or others. Reid herself conjured up a nightmare scenario of Trump committing “treason, and then pardoning himself.” The reliably hyperbolic Joan Walsh spoke darkly of a “constitutional crisis.”

The pardon-mania of Reid and the rest of the MSM is a media creation. It started Friday night with an article in the Washington Post based on anonymous sources.  Since then, the media has spent the entire weekend obsessing over pardons, because discussing pardons assumes Trump and others did something illegal. As this article notes, however, Trump attorneys John Dowd and Jay Sekulow have denied that they have been discussing or researching the president’s pardoning powers.

So sit back, view the video, and watch Joy and her liberal journeymen patter on unpardonably—you should pardon the expression.

but Reid and her panelists poured interminably over the pardon possibilities.

Pored. Unless the A/C was on the blink, and sweat was running off their faces onto the script.

Glad I’m not the only one – was just looking at a menu for a new local restaurant – what should have been “palate” was spelled “pallet!” Made me giggle!

Trump attorneys John Dowd and Jay Sekulow have denied that they have been discussing or researching the president’s pardoning powers.

They wouldn’t need to research. This power is very well understood. My guess is what happened is simply that Trump asked them out of the blue to explain his power to pardon, because to him this is new and exciting and he doesn’t know much about it, so they explained it to him. End of story. It doesn’t have to have been apropos of anything. But yes, a president can pardon himself, that’s been the case ever since 1789 and yet no president has ever done so — most never had occasion to.

If Nixon had the opportunity and legal right to grant himself a pardon, then why didn’t exercise that right? Instead he resigned and his successor Gerald Ford granted him a “full, final and absolute” pardon. Of course, if he did pardon himself there would have been mass hysteria and turmoil in the streets.

We also would have been deprived of one of the greatest international crises of all time. It was the Russia Russia Russia of its day. On an official state visit to Japan when Ford stepped out of Air Force One onto the steps rolled up to the cabin door, horror of all horrors happened. I shudder as I write this. His socks became visible beneath the cuffs of his suit pants.

Article II Section 2 1: The President shall… have Power to grant Reprieves and Pardons for Offences against the United States, except in Cases of Impeachment.

I don’t know why Nixon didn’t pardon himself, but I suppose it was simply because he thought it would not be honorable. The left has made him out to have been someone without honor, to whom such a consideration would be laughable, but we know better.

Reid is a bit of an unimaginative dimwit. She gets the word or meme of the day and cannot be moved off center.

Her sex toy is obviously powered by a Duracell. I didn’t know Duracell made a 12 volt 750cca battery, but they must.

So sit back, view the video…

Why would I do that?
You already did for us, right?
We trust you and appreciate your sacrifice. Please don’t try to torture us again.

“While all agree the U.S. President has the complete power to pardon, why think of that when only crime so far is LEAKS against us. FAKE NEWS. ”

So, he says he’s got this power, but does not need to use it. I am sure the Weird Sisters had trouble grasping the import of the sentence as a whole, much less the entire tweet.

Reid herself conjured up a nightmare scenario of Trump committing “treason, and then pardoning himself.”

Trump could have them all shot (Will no one rid me of these meddlesome fake journalists?)… then pardon himself, and whoever he sent to do it—Seal Team Six … Bikers for Trump … NORAD … Lon Horiuchi … whoever.

After Ford’s pardon of Nixon for alleged crimes which hadn’t been tried, or even charged, pretty much anything goes.

[Obligatory note for the terminally literal—No, I am not celebrating the virtues of political assassinations, nor an I speculating that Trump or his acolytes are contemplating any such thing. Kee-rist, you people … I am commenting on the circumscribed imaginations of Trump’s inveterate opponents.]

After Ford’s pardon of Nixon for alleged crimes which hadn’t been tried, or even charged, pretty much anything goes.

There was nothing new or groundbreaking in Ford’s doing that; pardons preempting charges have been absolutely routine since the beginning of the republic, and no knowledgeable person has ever doubted their validity. George Washington pardoned the Whiskey rebels, Johnson pardoned everyone who fought for the South, and Carter pardoned all the draft dodgers.

Ooooh, I see what you did there.

#RussianHackers is the left’s equivalent of a Birther movement.

Perhaps, we should call them Birchers

Except Birchers had more evidence!

I swear I wrote birthers!

It is laughable. And to think, these people take themselves seriously. Are they ever right about anything? Based on their record alone no one should adhere to their analysis. This is before bias is considered.

Perhaps President Trump, in a magnanimous spirit of bipartisanship and reaching across the aisle, is considering pardoning President Obama for all possible past crimes that he and his administration were involved in regarding bugging the presidential campaign of the opposition party, based on the premise that the candidate was an agent of a foreign government. Come to think of it, maybe Nixon should have justified the Watergate break-in and attempted bugging on the belief that likely nominee George McGovern was acting as an agent of North Vietnam by opposing continued involvement in the Vietnam War. Too bad he didn’t have a FISA court back in 1972.