Who could’ve possibly seen this coming? 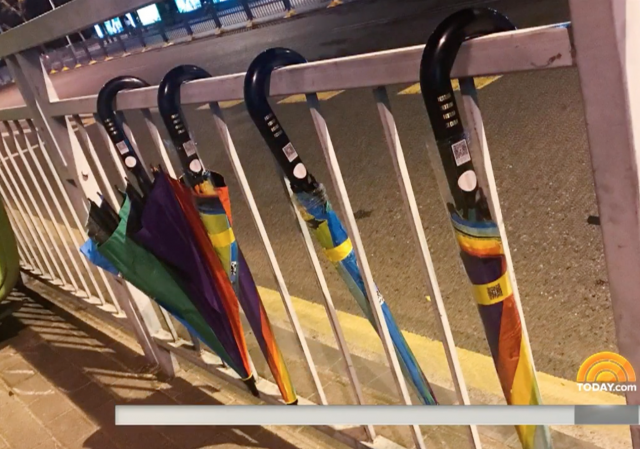 Hoping to capitalize on the burgeoning sharing economy, a Chinese start-up company lost almost all of its wares within weeks of opening up shop.

E Umbrella, which opened up operations in eleven different Chinese cities, is now without umbrellas to “share”.

The problem wasn’t so much renting the umbrellas, it was finding a good place to return them, says E Umbrella. Even though most umbrella renters decided to keep them, rather than bothering to “return” their rented goods.

The Shenzhen-based company was launched earlier this year with a 10 million yuan investment. The concept was similar to those that bike-sharing startups have used to (mostly) great success. Customers use an app on their smartphone to pay a 19 yuan deposit fee for an umbrella, which costs just 50 jiao for every half hour of use.

According to the South China Morning Post, company CEO Zhao Shuping said that the idea came to him after watching bike-sharing schemes take off across China, making him realize that “everything on the street can now be shared.”

While Sharing E Umbrella gave out their umbrellas at train and bus stops, they soon realized that getting users to return the umbrellas would be a problem. “Umbrellas are different from bicycles,” Zhao said. “Bikes can be parked anywhere, but with an umbrella you need railings or a fence to hang it on.”

The SCMP reports that Zhao concluded that the safest place for an umbrella would be at the customer’s home, where it would be safe and undamaged. But, apparently, customers have skipped the final step of then returning the umbrellas, simply keeping them for themselves.

E Umbrella was supposed to be the hottest addition to China’s sharing economy, which explains why the company was able to rake in so much investment capital:

Venture cash is rushing into China’s nascent but diverse sharing economy, providing tens of millions of yuan in recent months for startups focused on shared bikes, power banks, basketballs and even umbrellas.

Umbrella-sharing app E-umbrella became one of the latest favorites of venture financiers after raising 10 million yuan ($1.5 million) this week, just a week after its first batch of 30,000 rain-protection products hit the streets in Shenzhen, a southern Chinese city where downpours are common from May to September.

The company’s rainbow-colored umbrellas can be found hanging from roadside fences. Each has a coded lock that, whenever it starts to rain, can be opened with a swipe of a QR code by passersby with smartphones. Customers pay a 19 yuan deposit and 0.5 yuan per half-hour of use.

Another umbrella start-up, Molisan, tested the market in Guangzhou with 1,000 umbrellas. Unlike E Umbrella, Molisan stores their umbrellas in cabinets when the weather is dry. Molisan representatives claim they’ve only lost 8 of the 1,000 umbrellas. Even with such small losses, they’re considering doubling the rental deposit to further discourage theft.

As for E Umbrella? Zhao remains undeterred and plans to release another 30 million umbrellas by year’s end.

It might not be such a bad business model. Video rental stores used to make a lot of money off of late returns and lost videos.

Seems like a reasonable concept, you just have to make the deposit high enough to guarantee people will bring them back. If they still don’t you keep charging their credit cards late fees until they do. The main problem here seems to be that customers had nowhere to return them.

I’m sure the “lo-Jacked” all the umbrellas.

I think I would just buy my own umbrella.

In the rain, umbrellas are gold. Much more valuable than a bike.

NYC has a price cap on “emergency” umbrellas. You can get one for $5.00 almost anywhere. Not sure the price cap has any actual effect.

Maybe it does have an effect, even if a (possibly) unintended one.

Here in Florida, there’s no price cap, and you can get them in most dollar stores – for $1.00. Of course non-dollar stores often charge double or triple that…

I’ve never lived anywhere that it rained enough to have an umbrella. Okay, Vietnam was kind of wet, but an umbrella would have been a little awkward.

That reminds me of the family guy episode when Peter is in the Vietnam war dressed as a clown because the enemy will be looking for “Army guys”. No insult intended for the video, I would never call you an Army guy. Semper Fi

Who would have guessed that a bunch of Chinamen would bogart the umbrellas?

If this was in Japan, they’d put satellite location monitors in all the umbrellas. Not so much to keep track of them, but just because they can.

A relative who worked in Japan for a while tells me that the only thing the Japanese fear more than old trash is getting caught in the rain without an umbrella. He didn’t notice that the Chinese were quite so fastidious, though things might have changed since then.

“I think I would just buy my own umbrella.”

Because the overhead involved in renting one is probably close to (above?) the cost of buying one that can survive at least a single use?

I’m always surprised at how expensive those shared bicycles are to rent relative to the cost of a cheap used or new bicycle, especially if something goes wrong that prevents you from returning it on time. BUT the difficulty of transporting your own bicycle to where you want to use it creates a market anyway, at least for some. But not so much for umbrellas, which are portable as well as cheap enough to be almost disposable.

Then again, all rental bicycles are surprisingly expensive relative to the cost of buying one: why, exactly, can it cost as much to rent a bicycle for a day as to rent a car, even though the car is far more expensive?