Too many risks for Americans in the Communist kingdom. 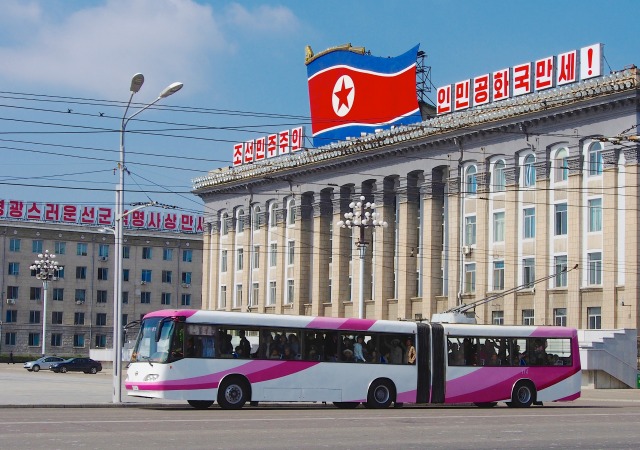 The United States already had strict regulations regarding tourism to North Korea, but after the death of Otto Warmbier, the State Department has decided to ban it completely.

The U.S. will ban American citizens from traveling to North Korea starting next month, the State Department said Friday, citing growing risks to Americans who venture into the country.

A citizen can receive permission to travel to North Korea “for limited humanitarian or other purposes.” If approved, the department will issue the citizen with “special validation passports.”

Ms Nauert’s statement said: “Due to mounting concerns over the serious risk of arrest and long-term detention under North Korea’s system of law enforcement, the Secretary has authorised a Geographical Travel Restriction on all US nationals’ use of a passport to travelling through, or to North Korea.

“Once in effect, US passports will be invalid for travel to, through, and in North Korea, and individuals will be required to obtain a passport with a special validation in order to travel to or within North Korea.

“We intend to publish a notice in the Federal Register next week.
“The restriction will be implemented 30 days after publication.”

[Young Pioneer Tours employee] Rowan Beard said that the 30-day grace period would “give leeway for any [Americans] currently in the country as tourists or on humanitarian work”.

Once there, tourists cannot travel North Korea independently. The Communist regime places the tourists with a tour guide and a strict itinerary. Most of them stay in Pyongyang and the trips last between three days and two weeks.

Koryo Tours and Young Pioneer Tours, both based in China, are the largest travel companies that take Westerners to North Korea. The Swedish embassy in Pyongyang informed the companies of the ban since the U.S. does not have one there. The Swedes therefore “handles diplomatic affairs in North Korea” for the U.S.

These groups spoke to CNN:

Another agency, Young Pioneer Tours, issued a statement Friday saying it was told that the US government will no longer allow US citizens to travel to North Korea. The ban will become effective within 30 days of July 27, it added.

“After the 30 day grace period any US national that travels to North Korea will have their passport invalidated by their government,” the statement says.

Mr. Cockerell said Friday that the travel ban would be “a big blow to us,” and it would likely reduce the willingness of other Western nationals to travel to North Korea.

U.K.-incorporated Koryo Tours accounts for about 40% of the overall volume of Western tourists to North Korea, he estimates. Mr. Cockerell criticized the U.S. decision.

“All interactions between North Koreans and Americans, who are very much demonized in the country, will grind to a halt, and the North Koreans will only be left with their own media to portray Americans as they like,” he said.

North Korea currently holds at least three American citizens, but none of them are tourists:

Kim Dong Chul, the president of a company involved in international trade and hotel services, was arrested in 2015 and is serving 10 years on espionage charges.

Kim Sang Duk, also known as Tony Kim, a university professor, was detained in Pyongyang in 2017 and accused of attempting to overthrow the government.

Kim Hak-song, a native Korean born in China (Jin Xue Song is the Chinese version of his name) was detained May 6 on suspicion of “hostile acts” against the regime. He is a professor at the same university as Tony Kim.

North Korea released Warmbier last month after he spent 17 months in prison. The regime sentenced the student to 15 years of hard labor after he allegedly stole a propaganda sign.

Warmbier came home in a coma. Specialists at the University of Cincinnati Medical Center stated that he suffered from “severe neurological injury” and “extensive loss of brain tissue.” This told doctors that Warmbier “had lost blood supply to his brain for a period of time.”

His father Fred told the media that the “pariah regime in North Korea” “terrorized sand brutalized” his son for 18 months.

Warmbier passed away only a few days later.

I don’t see why any North Koreans should be in the USA.

So long as they obey US laws and pay their own bills why not have North Koreans visit the US?

And the order will stand until a judge in Hawaii overturns it so someone can visit their sick 3rd cousin for humanitarian reasons.

Yeah 3rd cousin & grandfather pretty much the same thing. I’ll bet their are a lot of grandfather suicide bombers.

Obama was mocking resistance to keeping women and children out. And then the sucubus from Pakistan joined her husband to shoot up a Christmas part in San Bernardino. The only she reason that she was able to do that is that this stupid country allowed her to enter.

Obama also mocked people about a desire to ban travel from African nations affected by the ebola virus outbreak. Then, there was an assurance that even if we had an ebola outbreak in the US, any hospital could deal with it. And then Thomas Eric Duncan came to the US from Africa and made fools of Obama and CDC. The only reason that happened is because the country allowed him to enter.

The absence of any sense of self preservation among liberals is astounding.

A preening, deluded, incompetent fool like obama mocking anyone is – comedic. Talk about yesterday’s news.

Plenty of grandchild ones, though.

I am banned from visiting North Korea? I’ll get over it.

Why the hell would anyone with two brain cells want to go to a place like that? I guess they must be into zero population growth.

The answer is curiosity and probably a little thrill seeking.

why do we allow US citizens to go to countries which we cannot protect them ?
If they DO go we need to revoke the passports.
(special dispensation needs to be very RARE),.

Maybe they just want to grab a propaganda poster. Real ones are all the rage. (<— Kidding. Poor taste joke. That was most likely a bogus charge besides. ) I think this sounds more like Trump signaling N.K. just to keep them on edge. He's talking to them more than to us while saying also that he cannot protect us there. I like Limbaugh's characterization of Trump vs media that he's the guy with the laser pen tormenting his house cats making them bash their own heads into the wall. This N.K. thing seems a similar thing. N.K. is provocative. So is Trump. It's statesmanship with deadly consequence.