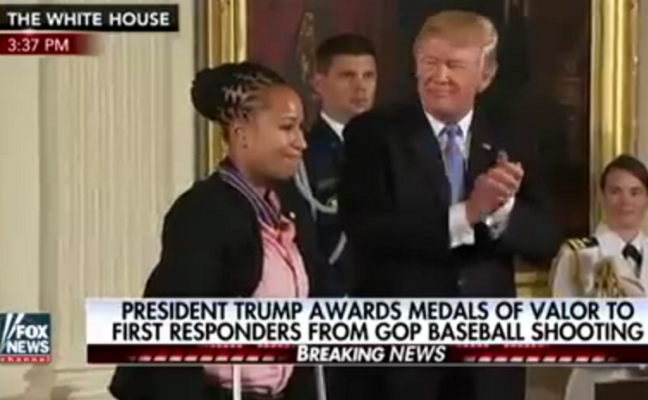 I love this story!  Not that you’ll see it in the mainstream media, but President Trump awarded Medals of Valor to each of the law enforcement officers who responded to the Alexandria, Virginia assassination attempt on GOP Congressmen who were practicing for a charity baseball game.

President Trump held a ceremony at the White House today to present medals of valor to the police officers who responded to the Alexandria shooting. Special Agents Crystal Griner and David Bailey, who were on a protective detail for Rep. Steve Scalise, were the first to receive the awards. Also honored today were three members of the Alexandria police force who responded to the incident within minutes: Officer Nicole Battalglia, Officer Alex Jenson and Officer Kevin Jobe.

He continued, “When our human instincts tell us to run, there’s danger, our police and first responders run straight at it, standing in the breach, protecting the innocent and keeping our loved ones safe.” Trump then presented each officer with a medal as their citation was read aloud.