In the ongoing saga over the lower federal courts’ attempt to usurp presidential power over who may enter the country, the Trump administration late last night filed a request for the Supreme Court to review and to halt the Hawaii federal court order that dramatically scaled back Trump’s Travel Order No. 2.

As described in our post about the Hawaii Order, we noted that those exempted from the Order extend far beyond the “close familial” relations as described in the prior Supreme Court ruling which substantially overruled the Hawaii Court’s prior preliminary injunction. Those exempted, according to the Hawaii federal court, include:

While all of these categories expand what the Supreme Court ruled, the “cousins” exemption is particularly abusive. What degree of cousin? I have 2nd cousins I haven’t seen in decades – are they now my “close familial relations” under the Hawaii Order? What about more distant cousins? The Hawaii Order strips the Supreme Court ruling of almost all practical effect, and exempts entire extended families, some of which themselves may number in the hundreds of people.

As The Telegraph notes, these categories plus the easing of restrictions on “refugee” entry, open up tens of thousands of people to entry outside the Travel Order, and I think that’s on the low side.

But that’s not what you hear in the mainstream media, which focuses on grandparents: 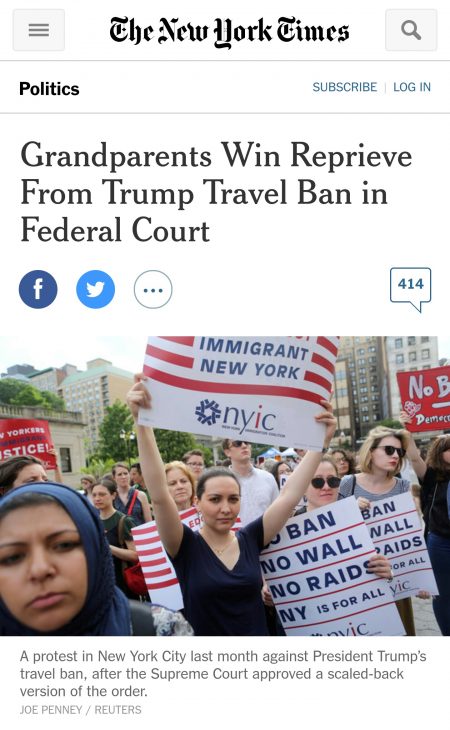 As Micky Kaus points out, this is “Classic liberal lawfare: Highlight exclusion of grandparents, use it to sneak in nieces, nephews, cousins, etc.”

This is essentially the pitch the Trump administration makes to the Supreme Court in its Motion for Clarification and Temporary Administrative Stay (full copy embedded at bottom of post)(pdf.)(emphasis added):

In two important respects, however, respondents pressed further in an effort to strip this Court’s stay of significant practical consequence. The district court adopted both of respondents’ arguments, and denied the government’s request for a stay pending
this Court’s review. The government therefore is left to seek this Court’s immediate intervention.

First, for aliens abroad who seek admission as refugees, this Court held that the suspension in Section 6(a) of the Order and the annual cap in Section 6(b) “may not be enforced against an individual * * * who can credibly claim a bona fide relationship with a person or entity in the United States.” IRAP, slip op. 13. Respondents do not contend that the government has applied Sections 6(a) and 6(b) to refugees who themselves have developed actual, bona fide relationships with U.S. entities. Rather, respondents object that, for every refugee who is likely to enter the United States while Sections 6(a) and 6(b) are in effect, the government has contracted with a resettlement agency to provide assistance to the alien once he eventually arrives in the United States, and the alien has a qualifying bona fide relationship on this basis. Prior to the refugee’s arrival, however, the relationship is solely between the government and the agency, not between the agency and the refugee. Indeed, the agency typically has no contact with the refugee before his admission. Because the fact of an assurance does not itself create a relationship between a refugee and a resettlement agency, the government has not treated that fact alone as sufficient to trigger the injunctions. To do so (as the district court did) would render the refugee portion of this Court’s decision effectively meaningless.

Second, for aliens abroad who seek a visa, this Court similarly held that the suspension in Section 2(c) of the Order may not be enforced against an individual with a credible claim of a bona fide relationship to a U.S. person or entity, including “a close familial relationship” with a U.S. individual. IRAP, slip op. 12 (emphasis added). In interpreting what degree of closeness is required, the government looked to the waiver provision of Section 3(c)(iv) of the Order, which allows waivers for aliens who seek “to visit or reside with a close family member (e.g., a spouse, child, or parent)” in the United States. Order § 3(c)(iv). That waiver provision in turn reflected the provisions of the Immigration and Nationality Act (INA), 8 U.S.C. 1101 et seq., governing eligibility for family-based immigrant visas, which are limited to spouses, children, parents, and siblings. In light of related INA provisions and this Court’s stay decision, the government has further interpreted the phrase “close familial relationship” to include fiancé(e)s and parents- and children-in-law.

At respondents’ urging, however, the district court interpreted that phrase also to include grandparents, grandchildren, aunts, uncles, nieces, nephews, cousins, and siblings-in-law. Again, that interpretation empties the Court’s decision of meaning, as it encompasses not just “close” family members, but virtually all family members. Treating all of these relationships as “close familial relationship[s]” reads the term “close” out of the Court’s decision. Moreover, by divorcing the Court’s language from its context — namely, the Order’s waiver provision and the immigration provisions on which it was based — the district court adopted an expansive definition untethered to relevant legislative enactments or Executive action.

The government explains why the Supreme Court needs to act now:

At this point, this Court’s intervention is both necessary and warranted. Only this Court can definitively settle whether the government’s reasonable implementation is consistent with this Court’s stay.

In a perfect world, the single Justice responsible for the 9th Circuit (Kennedy), should immediately stay the Hawaii Order, pending further review by the full Court, either this summer or when the Supreme Court considers the full case on the merits in October. But more likely, Kennedy will refer the request to the full Supreme Court, giving Hawaii a chance to respond.

Subsequent to our original post, the Supreme Court requested that the Hawaii has until 12 p.m. Tuesday to file its opposition.

The Trump administration also filed an appeal and motion for stay with the 9th Circuit (full embed at bottom of post)(pdf.).

The government’s substantive arguments are the same as made to the Supreme Court. It explained why it is filing in both places:

Although awkward to be in two places at once, it makes procedural sense. The nature of what the Hawaii court did in reinterpreting the Supreme Court ruling leaves the procedural path to review somewhat unclear. The government didn’t want to go one court and be told it should have gone to the other.

And in other news, the FBI sat in on that meeting between Trump Jr. and the Russians.

Veselnitskaya’s “interpreter” at the meeting was a State Dept. contract employee who officed out of the FBI NY field office. The FBI has always known of this meeting and the FBI continues to say that there is no evidence of collusion between anyone in the Trump camp and Russia.

Looks like DJT has some more wins teed up.

“And in other news, the FBI sat in on that meeting between Trump Jr. and the Russians.”

We can’t be sure of that. Lets ask someone who was definitely there. “Get me Brian Williams asap.”

Not just the lower courts; the Supremes are attempting to do so as well. It was the Supreme’s attempt to rewrite Trump’s order which gave Hawaii the opening it needed for this further outrageous usurpation of legal authority.

That’s it. No cousins, no aunties, no grandmas, no grandpas, no nephews or nieces, no goats.

This is an outrageous usurpation of executive powers, and a spit in the face for all legal immigrants that follow the rules.

sorry about the down tick. I wanted to reply.
think about this, the current lawsuit started because someone wanted to bring his mother-in-law to the states from Syria, the wife is a legal citizen, ask yourself this why didn’t she start the visa request, it met the current ‘bona fide’ relationship rule. think really hard.

The downtick is no biggie, and your comment is great because it shows WHY they are doing it.
This is not about immigration or about rights or justice. This is about obstruction by any means possible.

Is it just me or is it not obvious that any exemptions in President Trump’s temporary ban for any relatives by SCOTUS is simply bleedig-heart judicial activism with no basis in our Constitution?

It’s not just you.

I assume it was the “compromise” that let the Supreme Court issue a unanimous stay before hearing the case. And that the Court will eventually find fully in favor of the President, but with a split vote.

Again, Trump should show the judiciary that meddling in the prerogatives of the Executive and Legislative branches has consequences. He should act under Goldwater v. Carter and withdraw from all treaties that require the US to accept refugees. Then work with Russia to shut down the circus in Syria, start rounding up the Saracens present here, and send them back. Then impose a moratorium on all immigration.

What sort of consequence (to the out-of-control judge) is that?

That’s giving them exactly what they want — to goad the President into doing something that looks reckless and dictatorial.

What good is having the authority to do something if you are afraid to exercise it?

You mean, like, say, pushing the buttons on the Nuclear Football?

Given the recent developments from the Korean peninsula, that may become necessary.

One hope it may never be so, but to be a deterrent, there must be a credible threat to use it if so called upon.

The last eligible relation should properly read, “Cousins of persons of interest in the United States.”

“In a perfect world, the single Justice responsible for the 9th Circuit (Kennedy), should immediately stay the Hawaii Order, pending further review by the full Court…”

Huh. I didn’t know that. (Yea, I learned something today!)

As a little icing on the cake, could we get Gorsuch moved around to be the justice who oversees the 9th Circuit, maybe?

But WHAT are we doing about it?? Nothing. As usual. They own the narrative that the majority hears. We arent even talking on our side. Most Americans only know.. RUSSIA. Where are our people talking about this everywhere and anywhere?

Everybody just keep your shirts on and your hair from combusting.

One of the most telling thing about the SCOTUS decision, with regard to the temporary injunction, was the fact that, even after the court unanimously agreed that Trump had the power to issue and enforce the EO, that they were going to let parts of the injunction stand, though modified, without citing any controlling authority for that action. Now, the plaintiffs have injected federal law which defines familial relationships with regard to entry into the US. And, the COURT will have a great deal of trouble ignoring established law in this regard. If they rule in accordance with existing federal law, and I have trouble seeing how they can not do this, then this will actually restrict familial entry further than it was when the plaintiffs asked for clarification.

One last thing. Even if the SCOTUS bought the argument that the 90 day moratorium had passed, making the matter moot, the Executive wanted the moratorium in order to determine if the vetting process in the effected countries was sufficient to determine the threat level of any person from those countries. If, during this time, the Executive determines that such vetting processes are not sufficient, then they can simply suspend visas, and other forms of entry, until the processes have been strengthened to the point where they are reliable.

From page 11 of the brief to the Supreme Court:
“An assurance is a contractual commitment between the resettlement agency — one of nine nongovernmental organizations that have entered agreements with the government to provide resettlement services — and the Department of State to provide certain services and assistance to the refugee following the refugee’s arrival in the United States.”