This is what Fake News looks like: Polish First Lady “passes over” Trump handshake

This is what Fake News looks like: Polish First Lady “passes over” Trump handshake

If Washington Post and other leading media will mislead as to a handshake, why should we trust their “anonymous” sources? 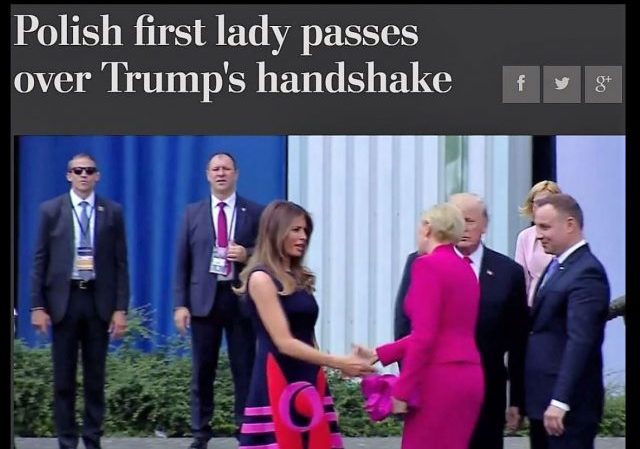 A misleading video clip of Donald Trump supposedly being passed over for a handshake by the First Lady of Poland is sweeping the internet. In fact, there was a handshake a couple of seconds later, but the clip is cut so tightly that it appears that this was a sign of disrespect.

If it were just another misleading internet meme, it would be bad enough. But it is being pushed by the Washington Post on Twitter and on its website, as well as by other major media. 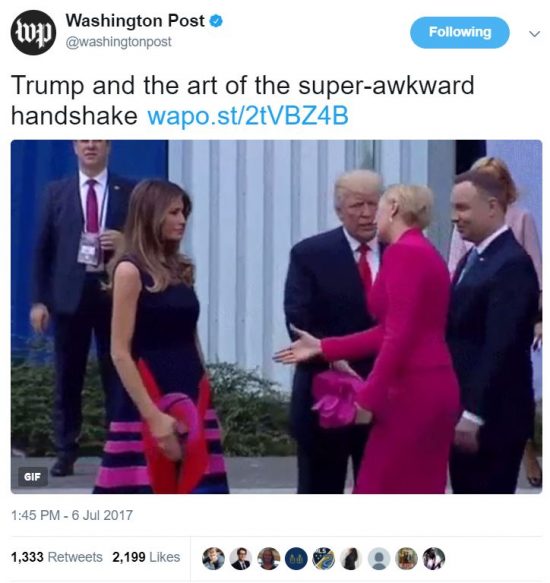 WaPo continues this story line on its website, twice. WaPo’s article contains that same two-second clip as part of a longer clip of prior Trump handshakes: 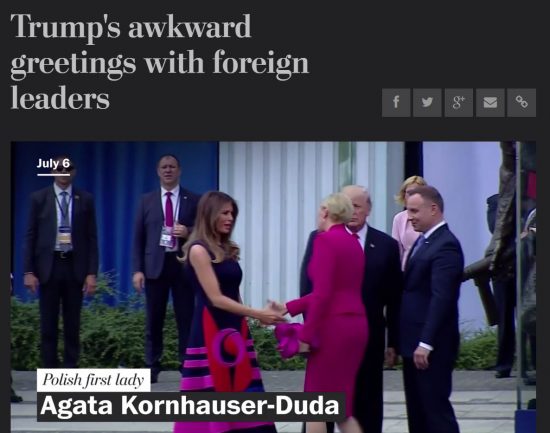 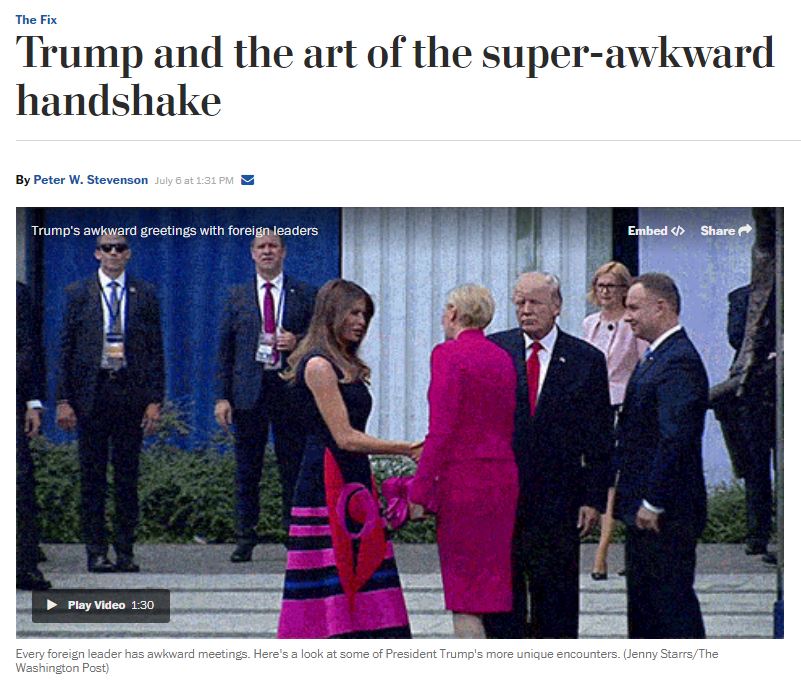 The text added by WaPo admits that the video clip and story is misleading — so why did WaPo use a misleading headline and video in the first place?

WaPo does post the full video, but again with a misleading headline. 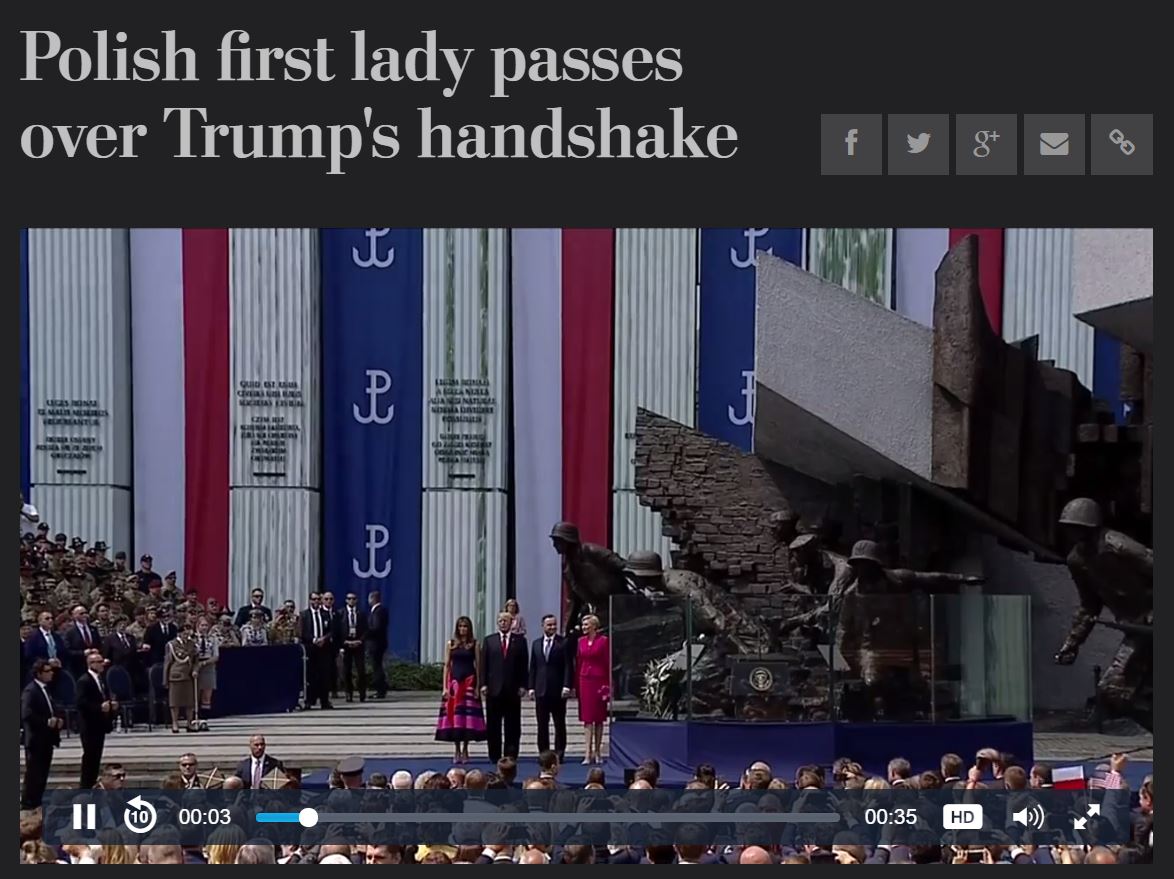 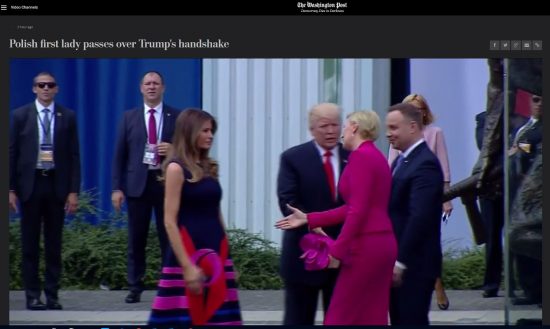 It’s completely misleading, but you have to watch far into the clip to realize it. Here’s the video, watch until the 23 second mark to see that just after the “passed over” handshake, the Polish First Lady shakes hands with Trump: 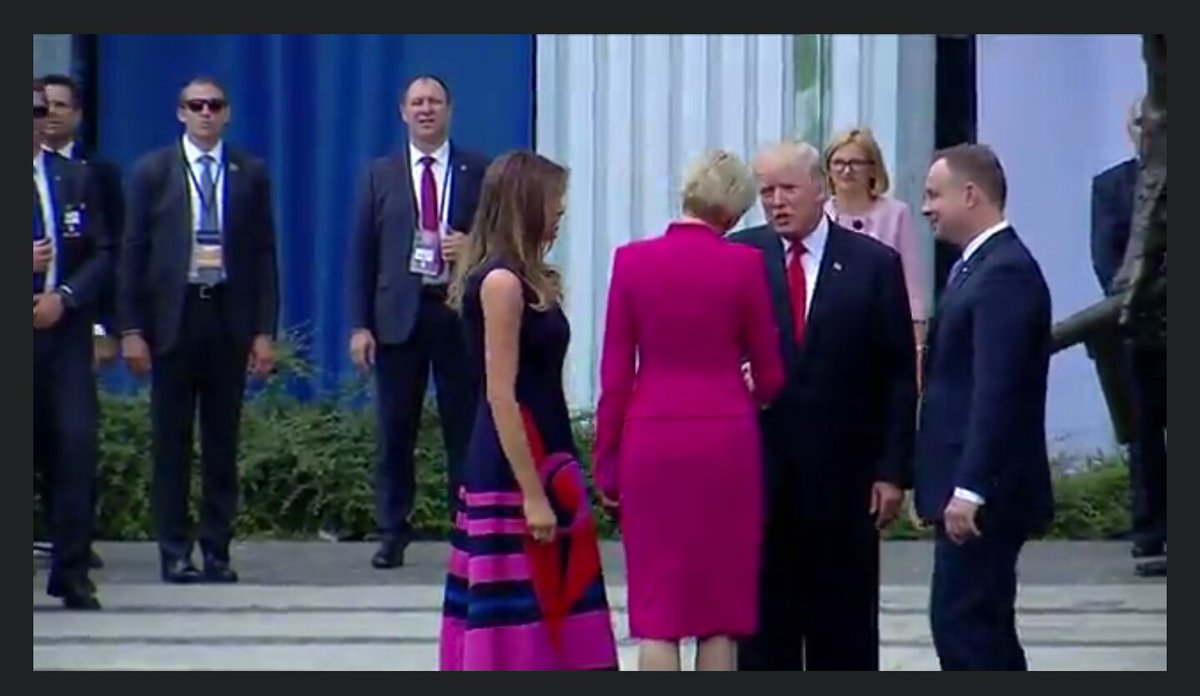 But it goes to the credibility of the leading media opponents of Trump.

WaPo was not alone. USA Today has a misleading headline: 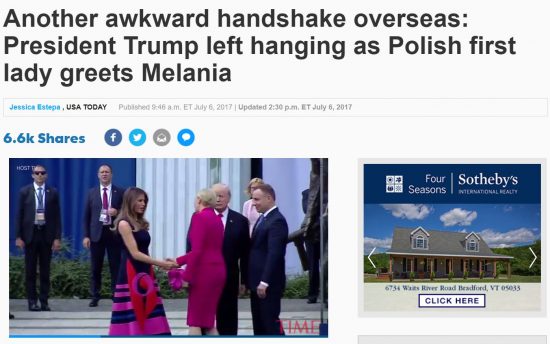 Newsweek ran a misleading headline, then added a correction: 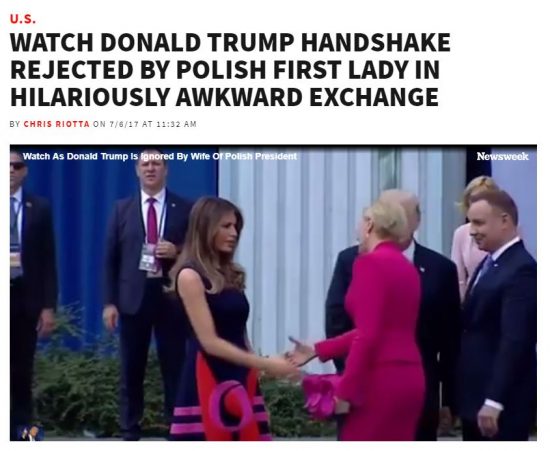 Chris Cillizza of CNN shared the misleading video, and laughed about it: 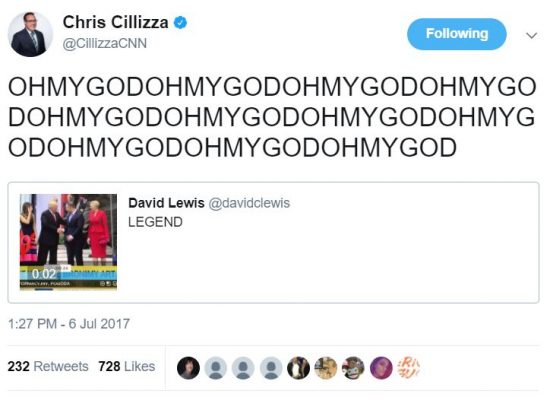 Cillizza admitted he knew it wasn’t true – just funny – so what does that make him? 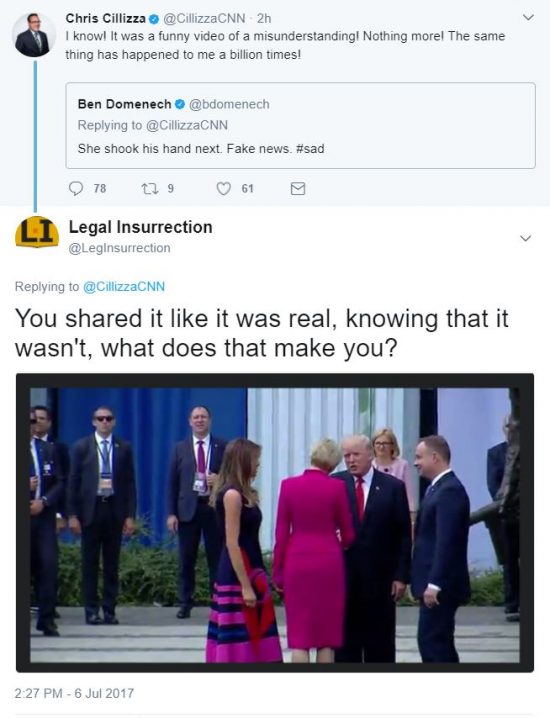 If WaPo and other leading media are willing to try to embarrass Trump with a misleading video story over something like a handshake, about what else are they willing to mislead?

Next time WaPo has a breaking story about Trump based on anonymous sources, and tells us to “trust” them on the sourcing, don’t.

UPDATE: This appears to be the account of the President of Poland (no blue check mark, but over 700k followers). If it’s not real, it should be:

Contrary to some surprising reports my wife did shake hands with Mrs. and Mr. Trump @POTUS after a great visit. Let's FIGHT FAKE NEWS.

Ridiculous nonsense. This is just sad.

As an aside, Poland is one of the places I’ve picked as a “bolt-hold” if the U.S. ever becomes Berniestan. I like the Poles.

Expect Poland, Hungary, the Czech Republic and Slovakia to replace Western Europe as US tourist attractions.

I’ve never been, but Prague is a whole city of art-work and amazing architecture, from pictures a law school section mate brought back.

I am starting a 2 week tour of the Balkans in Budapest in a couple of weeks myself. All of the history and culture, none of the crimes and globalist sentiment.

You wouldn’t ride it out in Texas?

If you professed your love for puppies and kittens, how many down-votes do you suppose you’d get?

That would depend on the day.

Some range of 1 to 9, based on experience. It’s a virtue-signalling ritual with some here. It really is an interesting phenomenon.

The text added by WaPo admits that the video clip and story is misleading — so why did WaPo use a misleading headline and video in the first place?

Why? You know why. Because they know their audience has a short attention span, and won’t read anything past the headline. And they don’t care that the video is edited, because it shows them what they want to see.

Is it any wonder why people think that the media is a threat to our free society.

President Trump fire away with your twitter feed put the biased and pompous media in their place! 🙂

We all love it every time they melt down.

You mean like when President Bush made a surprise Thanksgiving appearance with the troops in Iraq, and the main headline was the claim that the roast turkey he was carrying was made of plastic?

It’s definitely worth pointing this out every time it happens, but it shouldn’t be surprising anymore.

Or like when NBC edited George Zimmerman’s 911 call “for brevity” by removing the operator’s explicitly-asked question about Trayvon’s physical description, which just happened to make GZ sound like he offered the “He looks black” comment unprompted, and then making GZ out to be a bigoted racist because of it?

“Eventually”? What, like it took a week or two?

About 3/4 of a second. A bit too slow for the WP apparently.

Just wait for the state banquet. There will be more eyes glued to the monitors—watching to see who gets how many scoops of ice cream—than there were during the first moon landing.

The MSM is like an ex-wife. They talk a lot of shit, but nothing worth listening too.

But like an Ex who was a spouse abuser and child abuser also.

As biased as the Washington Post has long been, it’s become far worse since Jeff Bezos acquired it. I have stopped using amazon.cm all together.

You can often do better with ebay or Walmart.com (shipping is often free, or absorbed by the lower price.)

notamemberofanyorganizedpolicital in reply to TheFineReport.com. | July 6, 2017 at 8:41 pm

The great days of eBay—when it was actually an auction house—are long over.

It’s too bad when somebody actually comes up with a winning formula … only to have somebody else flub it.

In any event, Amazon has a winning formula, but hasn’t flubbed it yet. I don’t consider Bezos’s crimes in other spheres to be Amazonian failures.

notamemberofanyorganizedpolicital in reply to tom swift. | July 7, 2017 at 2:33 pm

Meg Whitman, but Jeff Belzo is not prize to write home about.

Don’t forget Obama’s handshake with Castro (the limp hand) and there appears to be others if you google it.

At least, Trump is not bowing to world leaders like Obama did.

And, I think it is protocol for the pres to shake hands with like position and for the First Ladies to first shake hands before switching to the husbands. But, we all have had the awkward handshaking situations.

Pardon me if this seems obvious, but I would prefer to shake Melania’s hand first over The_Donald any day of the week. Just sayin’.

Well, sure, we all saw from that CNN video exactly what happens once President Doinald gets a solid grip on you.

There is a cult of people (can you say “Hollywood idiot,” and the wanna-be’s around them) who are just that: in a cult. No matter what evidence you present to them to the nonsense broadcast by their handlers on the left, they will deny it with every ounce of their pathetic egos.

This is why the left continues to broadcast and print fake news: it’s ‘directions’ for their useful idiots on how to think in light of someone messing with their denial. All that’s missing is the poison Kook-Aid, and Jim Jones would be right at home.

HOW TO RESCUE SOMEONE FROM A CULT:

The natural impulse is to confront your friend or loved one immediately, but the cults are ready for that. If it’s a cult then they will have planted a number of mental “booby traps” into the minds of their members. These booby traps are designed to be triggered by a number of common reactions to discovery of involvement in their group. The most common trigger are the words “It’s a Cult!” The cult knows it will be identified as a cult, and so they preempt that event by telling their new recruit that Satan (or some such enemy) will prompt those closest to them to say that they are a cult. So when you say what they have primed their member to expect, the new member will think, “Wow, they were right!”. Then it is unlikely that your friend or loved one will consider anything else you say. In fact your words might trigger panic and make them want to get away from you. So relax, and don’t call them a cult at first….
http://www.cultwatch.com/how-to-help-friends-family.html

cult needs to keep new members in its buzzing thumping environment to really get them hooked. So it’s of major benefit to get them away from that environment for as long as you can. Often a holiday is all that is needed for the new (or long term) cult member to gain perspective. So if you can, get them away from the cult. Make sure you go to a city or country where the cult has no presence. But do it in such a way that there is little time for the cult member to seek approval from their cult leaders. The more amazing the planned trip the more likely the cult member will disobey their leader and go. Taking a holiday is something you can do early on, as long as you remember the Golden Rule – don’t risk losing contact with them. Also, if the place you go happens to have bad communications, no internet or phone, then that will help break the members contact with the group.

Q: Why was it so hard for Michelle a guy like Barack?
A: Because most men like him already had boyfriends.

Just look at the sight of Melania Trump.

Whatever happened to that guy, anyway?

I always resented the term “anglo-sphere.” Maybe because I worked with the Japanese and the would have done anything than they could. Including trying to get their ship drivers arrested, just to make a point. That they couldn’t meet their international commitments without making it obvious they had conflicted with their own internal laws. And they didn’t want to lie. Again, they wanted to make a point.

I wonder how many know that Pulaski was one of only eight people to have been awarded (posthumously) honorary US citizenship or that the Twin Bridges folks use to pass over the Mohawk River every day is really named the Kosciusko Bridge.

“Maybe because I worked with the Japanese and the would have done anything than they could. Including trying to get their ship drivers arrested, just to make a point. ”

Our side. The American side.

It is standard polite custom in Poland when meeting a couple to shake the lady’s hand first, then the man’s hand. Likewise shake the hands of older more respected people first.

Trump should have been briefed on this but I’ve spent a lot of time around Poles and I still get crossed up from time to time. This type of politeness has long been out of fashion in our country.