Mike Pence isn’t so sexist after all

In April, the second family was ridiculed and their marital decision not to be alone with a member of the opposite sex the subject of vigorous Beltway debate.

The Vice President was called ‘sexist’ and it was generally assumed there was no way Mike Pence could successfully put his marriage ahead of his politics without unfairly discriminating against supremely qualified would-be female staffers (despite evidence to the contrary).

And it’s not a small percentage of the population leery of solo work meetings with members of the opposite sex. Close to two-thirds of those surveyed “take extra caution” when dealing with the opposite sex in the workplace and almost half think “it’s unacceptable to have dinner or drinks alone with someone of the opposite sex other than their spouse.”

Many men and women are wary of a range of one-on-one situations, the poll found. Around a quarter think private work meetings with colleagues of the opposite sex are inappropriate. Nearly two-thirds say people should take extra caution around members of the opposite sex at work. A majority of women, and nearly half of men, say it’s unacceptable to have dinner or drinks alone with someone of the opposite sex other than their spouse.

The Morning Consult surveyed 5,282 registered voters and this is what they found: 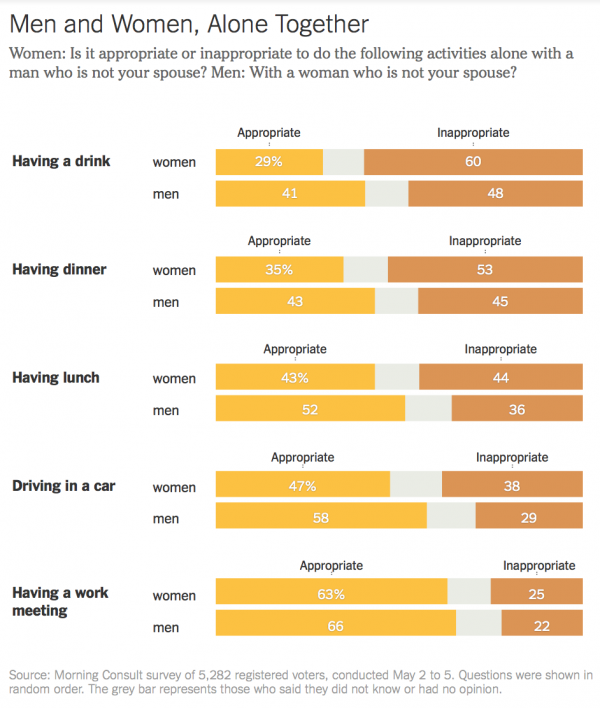 In interviews, people described a cultural divide. Some said their social lives and careers depended on such solo meetings. Others described caution around people of the opposite sex, and some depicted the workplace as a fraught atmosphere in which they feared harassment, or being accused of it.

“When a man and a woman are left alone, outside parties can insinuate about what’s really going on,” said Christopher Mauldin, a construction worker in Rialto, Calif. “Sometimes false accusations create irreversible damages to reputations.”

He said he avoids any solo interactions with women, including dining or driving, as does his girlfriend with other men. When he needs to meet with women at work or his church, he makes sure doors are left open and another person is present. Others described similar tactics, including using conference rooms with glass walls and avoiding alcohol with colleagues. “Temptation is always a factor,” said Mr. Mauldin, 29.

Some outings were perceived higher risk than others:

Over all, people thought dinner or drinks with a member of the opposite sex other than a spouse was the most inappropriate, with more people disapproving than approving. Lunch and car rides were less objectionable, but more than a third of people said they were inappropriate. Fewer than two-thirds of respondents said a work meeting alone with a member of the opposite sex was appropriate; 16 percent of women and 18 percent of men with postgraduate degrees said it was inappropriate.

And the demographic breakdown suggests populations more prone to believe in the sanctity of marriage are more willing to act accordingly:

Most higher education venues have open-door meeting policies in order to ensure the safety of both parties, both in reputation and in act. Yet, this subject continues to be a shocking revelation for many and one constantly viewed through the lens of sexism, rather than wisdom.

Someone ought to send Gloria Allred a Thank You card….

Wait. What’s wrong with the NYT? They must think there are only two sexes, these days?

The NYT must be against gender fluidity, or something!

The NYT must be against gender fluidity, or something!

Wow…You’ve added a whole new layer to this situation!

The current social/legal climate has become so toxic that some of us refuse to be alone with a member of the opposite sex for any reason whatever – even to the point of turning around and walking out of a convenience store of the only clerk is female.

Of course a GOPe character was ridiculed and the subject of a vigorous beltway debate!

Pence has not yet learned what Trump has learned: ridicule me and I destroy you. To a large degree, Pence is still stuck in boehnerland.

The female chauvinists set women and men at each other’s throats, and babies, too. We’ve been on a progressive slope since they forced catastrophic anthropogenic social liberalism.