“I know you’ll remember, what we used to hear from the old Soviet Union spokespeople” 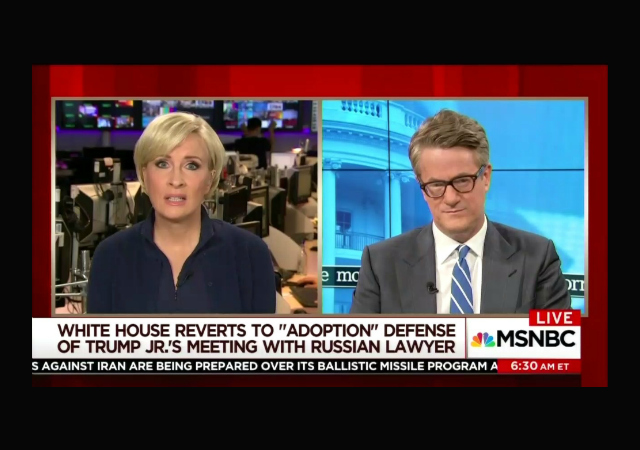 Give Joe Scarborough credit. Just when we were getting bored with all the Trump/Nazi analogies, Joe has come up with a new one. On today’s Morning Joe, Scarborough compared Trump press secretary Sean Spicer to an old Soviet spokesman and propagandist.

Scarborough’s beef was that Spicer had supposedly said that the meeting of Trump campaign people including Donald, Jr. and the Russians was “just about adoptions.” Joe called that a “lie.”

But have a look at the screenshot below, showing what Spicer actually said.

Spicer began by saying that it’s common “for people who are given information during the heat of a campaign to ask what that is.” In other words, when the Russian said she had oppo on Hillary, the Trump campaign was interested. That was their motivation for taking the meeting. When, as per the Trump admin, it turned out that the Russian had no oppo to offer and only wanted to discuss adoption and the Magnitsky Act, the meeting soon ended.

The wisdom of taking the meeting at all can be debated. But it is absurd for Scarborough to assert that Spicer claimed that the only subject of the meeting was adoptions. So who’s the propagandist now?

MIKA BRZEZINSKI: At yesterday’s off-camera White House press briefing, Sean Spicer would not say who was right, and reverted to the administration’s original defense of the meeting.

SEAN SPICER: I’m not going to get into the specifics of this, but I will say that it is quite often for people who are given information during the heat of a campaign to ask what that is. That’s what simply he did. The President’s made this clear through his tweet and there was nothing that as far as we know that would lead anyone to believe that there was anything except for a discussion about adoption and the Magnitsky Act.

JOE SCARBOROUGH: I mean, I’m glad that the topic’s to Russia because it actually reminds me, Sean Spicer yesterday, it reminds me, and I know you’ll remember, what we used to hear from the old Soviet Union spokespeople. They would come out and say things that had already been disproven, that the whole world knew had been disproven.

And when Sean Spicer comes out yesterday and says it’s just about adoptions, that, I mean, that lie, which the President signed off on on Air Force One was proven to be a falsehood over a week ago and everyone in Washington, everyone in America knows it. And yet like an old Soviet propagandist, you have White House people going out and actually quoting something that was proven to be a falsehood eight, nine, ten days ago. 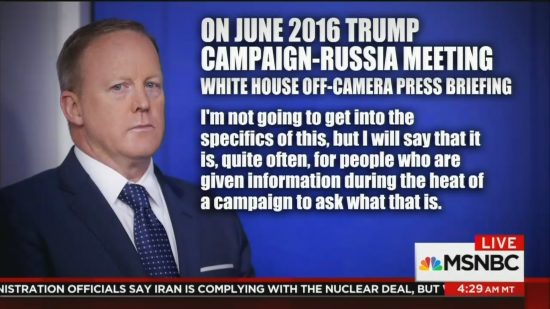 The colluders over at JournoList wanted to push annoying conservatives through a plate glass window.

JournoList Colluded with the Communist and Russia? No surprise there.

Like, who cares? Even if examples of the DNC and/or Podesta’s hacked emails were turned over to Don Jr. during this meeting, along with “Guccifer 2.0” contact information and his asking price for the rest of the 40,000 emails; and we further assume Don Jr. met with Guccifer 2.0, paid his price and obtained the rest of these hacked emails; that still would not be a breach of 52 U.S. Code § 30121.

Sean Hannity said Scarborough has sold his soul to the devil. Maybe it was just a human blackmailer. Or his boss.

It doesn’t matter. If ordinary people can pull up the actual press conference or the full quote, they can quickly find out something more about the propaganda du jour.

This is how I originally came to this site. The State of Arizona had passed an immigration law, and a “lawyer” at the New York Times had written a scathing review of it.

I came here asking for a cite to the actual law.

It turned out that the “lawyer” had written that review about a draft, not the law as passed, and the amendments were pertinent.

I liked to original Baghdad Bob more. Probably because he didn’t come across as a whiney girl.

But Baghdad Joe lost his cajones long ago.

I used to turn him on from time to time – now, will not watch, do not care what he says, not in the least. There is no longer any value in keeping up with the nonsense. I will not turn on CNN, MSNBC, or any of the alphabet networks, unless it’s on an election night when they’ve lost again and I can enjoy their bitter tears of ultimate sadness.

Spicer DOES sound like an old school Soviet propagandist. But Scarborough and company are just as oblivious how much they sound like the Soviet hierarchy: blaming everyone but themselves, and shifting the focus to non sequiturs.

Lying about lies about other lies.

Wake me when one of these jokers actually has something to say. Preferably someone not devoted to a career of putting on a fancy haircut to read us fake news.

It was only a matter of time.

I look forward to the fast-approaching moment when everyone on the left will agree that everyone knows that Republicans are Communists and always were.

Poor Joe. His relevance is gone. No longer an “acceptable” Republican, now just a run-of-the-mill “Independent.”. I tell my teenage boys how important who they marry is – case in point!!!

I saw a great meme with Beavis and Butthead , with Glasses , it was a perfect Joe and Mika lookalike, wish I could find it

Poor Joe Scarborough. Once a congressman and now a pathetic MSNBC “host” reduced to trying to find something that outrages someone so he can get some attention.

Apparently, he gets it here – in the form of a regular column devoted exclusively to passing along his thoughts in great detail.

It only encourages him to do more and increases msnbc’s ratings.

Not that this show or its dumb-as-rocks hosts ever had any credibility, but if they did, they’ve now lost all of it. Joe and Mika obviously think they’re the “cool kids”, but everyone with a brain is actually laughing at them.

Joe & Mika are the TV equivalent of “click-bait”
They did that last row with Trump, just as Mika was signing her 3 book deal.