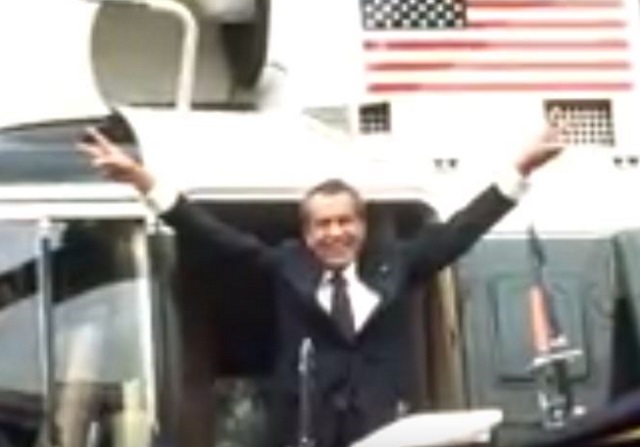 Does Joe Scarborough believe that Donald Trump will be resigning the presidency sometime this summer? Seems so, judging from Joe’s baleful proclamation on today’s Morning Joe. Said Scarborough:

“they have dug so far down low into the bunker that this is not Nixon in ’73. This is Nixon in the summer of ’74.”

Nixon resigned the presidency on August 8, 1974. Below is the iconic image of Nixon waving goodbye as he leaves the White House.

Note: Scarborough’s Trump-Nixon analogy comes the morning after he declared on the Colbert show that he was leaving the Republican party. Why would a principled person leave, rather than stay and fight for his beliefs? Could it have anything to do with Scarborough’s own presidential ambitions?

This column names Scarborough as a possible “independent” who could win the White House in 2020. Was Joe’s ditching of the GOP a prelude to a presidential candidacy? 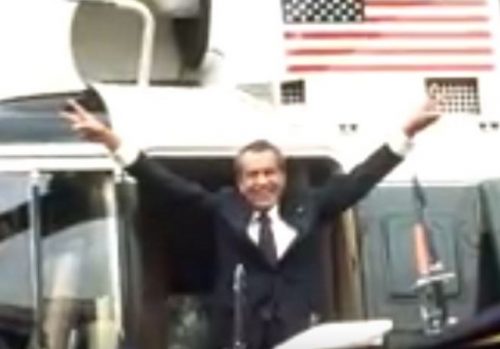 No, Joe’s ” principles” are no deeper than the private depth of the kind Mika gives him at night.

Duck Soup (2/10) Movie CLIP – The Laws of My Administration (1933)
https://www.youtube.com/watch?v=uSsUoxlSADk

Comments like this clown probably plays well with other clowns like them but what will be their next battle cry when Trump doesn’t resign?

What will they say after Trump is forced to run 3rd party and wins? This would decimate the GOP as the weather vaners follow the wind to join the new Trump party. The rest would finally be forced to merge with the mother ship finally ending the kabuki theater.

So Trump could theoretically win by losing, especially if he is forced off of the ticket or impeached over unicorn sightings.

Trump isn’t being forced out by anyone – in a roundabout way, that’s why Joe made a big show of “quitting” the Republicans. He and all the other never-Trumpers are coming to the awful (for them) realization that the Republican Party is Trump’s Party now. If they can’t deal with that, time to go somewhere else, and frankly better that they quit rather than continue trying to sabotage things from the inside.

Now it’s not Trump’s fault that there’s nowhere else to go. And for ordinary people with real jobs, being an independent today is arguably the most honest choice you could make.

BUT for the consultants and office holders and DC parasites, saying you’re independent cuts you off from the money spigot which only flows to those who affiliate with one or the other. And that’s what upsets them so much.

To Joe leaving the GOPe I say:
“May the door knob hit you where Mika split you!”

Who the hell cares what this idiot thinks? This site needs to stop covering Morning Joe like the hosts opinions matter. They don’t!

Yes, Scarborough changes his “principles” more often than he changes his underwear. Nobody, with the possible exception of the latest bimbo he’s carrying on with, gives a damn what he thinks.

Woe is us! How will the Republican Party survive without Crazy Joe’s loyal support and sage advice? Never saw this coming. Total shock.

His leaving was a formality, that I’m sure was cheered by the leftist colbert, he left the party & the principles of conservatism along time ago… must have been the L in MSLSD

We should legalize gambling.

It ought to be possible to respond to idiocy like this with a, “Put your money where your mouth is!” challenge — and profit if they do.

I’d give Hillary a better shot of winning the White House.

Because people would respond more favorably next time to yet another round of rigged primaries. Still good enough to crush Joe though. Heck, even I will get at least as many electoral votes as Joe will.

Morning Ho takes virtue signalling to a whole new level. He was only a Republican in order to get elected and to provide faux “balance” on that stupid show of his.

Joe is just virtue signaling just like the “country club” republicans that have gotten used to the civility of being the Washington Generals in any pick up basketball game. Handed victories in the House, the Senate and now the White House….. the GOPe realizes that being the lovable losers to the Dems is far more comfortable. Withdrawal from the addiction of big government and easily spent money was not going to be pretty …. for Joe and the GOPe…..it’s just a little addiction they say they can handle……but they will deal with it when things get better. Honest.

I man like Joe will say anything to get laid by a hot Demoncrat!

The one resigning will be Joe!

He is probably into tofu too.

Tofu? Is that a new sexual preference?

Trump is not Nixon. So far, he has confronted and reflected the Press’s effort to entrap him through a series of prevarications and innuendo. The baby hunt is now in its third trimester, and his opponents, foreign and domestic, have only managed to expose witches (and warlocks). Very soon, not even the devil would escape unscathed after choosing an elective abortion. They better hope there is a baby there, because Planned Press is a double-edged scalpel.

Scarborough fare has never been appealing nor entertaining to me. So, you won’t find me saying, “Say it ain’t so, Joe!”

This bozo is about as committed to principles as hillary clinton.