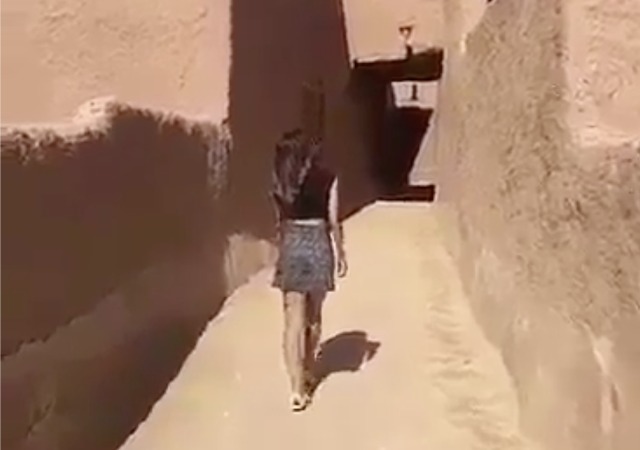 Saudi Arabia is a country that oppresses females, treating them as second class citizens. Recently, authorities arrested a young woman who wore a skirt and crop top in public. Her head was not covered.

The video, posted to Snapchat, “show the woman walking through an ancient fort in Ushayqir, a village in Najd province about 95 miles from the capital, Riyadh,” reports the Washington Post.

Saudi Arabia requires women to cover themselves in public, typically by wearing an abaya (a long, loose, robe) and a hijab, which covers the hair. Most Saudi women also wear niqabs or veils that cover their faces.

Translation: We must look forward in this conservative country.

To westerners, her outfit is that of a typical summer tourist – sunglasses, a short skirt, short T-shirt and her head uncovered. But it breaches Saudi Arabia’s strict dress code requiring women to wear headscarves and abayas (full-length robes) in public. Most also cover their face with a black veil, though exceptions are made for visiting dignitaries.

The videos, filmed in a region home to many of Saudi Arabia’s most conservative tribes and families, appeared to be a deliberate protest against clothing rules and has prompted calls for the woman to be prosecuted. But the woman has told the authorities that the videos were posted without her knowledge.

Translation: If everyone rebelled against the laws then it’d lead the country into a mess.

But others have taken to social media to defend the woman and denounce Saudi Arabia’s ridiculous laws. From The Washington Post:

But others offered their support for the woman, suggesting her behavior was brave and that prominent foreigners sometimes dress similarly when visiting Saudi Arabia, and they are exempted from the country’s dress codes. Many of them pointed out that Melania Trump and Ivanka Trump did not wear abayas when they visited the country in May, to little public outcry.

Translation: Saudi community exudes contradictions. It allows Trump women to go without, but hurls a Saudi girl and demands her trial.

The status of the woman arrested is currently unclear.

There we go, it’s all Trumps fault!

Anyway, I’m sure the women’s match people will be along any second now to deans justice for this woman!!!

So from a legal analysis of Muslim Sharia Law what are the possible sentences? 10 lashes or 1000 lashes..

All those surprised, raise your hand.

Saudi Arabia requires women to cover themselves in public

Pretty much all countries do. The details vary, but that’s all they are—details.

The Saudis may be trying to make their prison system more progressive, so prisoners sentenced to be lashed might be allowed to have something put on their backs prior to the lashing.

Hopefully, on her back, this woman chooses Linda Sarsour.

As Kemberlee said downpage – it’s not really *that* bad is it?

OTOH, the irony of a Saudi official tweeting out condemnation of modern dress fads…

Q: What do you get if you combine linda sarsour and a donkey?

A: A malignant ass in a headscarf.

Q: What do you get if you combine linda sarsour and hillary clinton?

A: A malignant ass in a headscarf that can’t even win a rigged election.

They don’t want Saudi Arabia to become the next Norway, France, Germany, America, etc. for visitors and refugees.

Lots of pixels about how backwards and regressive the Saudi society and culture is. Not so many about how this poor woman is likely to be brutally lashed for this.

She had to know what she was doing, though, and the risk that she was taking. Was this actually a protest on her part?

Nevertheless, pray for the poor woman: unless international outcry can prevent it, she stands a good chance to be whipped into a screaming horror.

For their sins, the Saudis should be forced to watch hillary clinton walk around in a mini-skirt.