Settlement for police violating Sanctuary City ordinance must still be approved by SF Board of Supervisors. 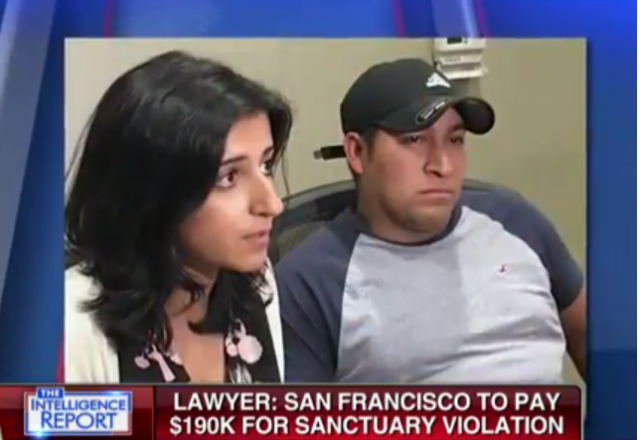 Yesterday, we reported that the U.S. House of Representatives passed Kate’s Law (increasing penalties for illegal immigrants who keep trying to re-enter the United States) and another that denies federal grants to sanctuary cities.

The need for such federal intervention was promptly highlighted after news of a six-figure settlement between the “sancturary city” of San Francisco and an illegal immigrant was released:

A man from El Salvador in the U.S. illegally who sued San Francisco after police turned him over to immigration authorities in violation of the city’s sanctuary law is set to be awarded $190,000, his attorney said Thursday.

Pedro Figueroa-Zarceno, 33, reached the settlement with the city attorney’s office, said Saira Hussain, a staff attorney at the Asian Law Caucus who represented Figueroa-Zarceno. The agreement must be approved by the Board of Supervisors.

“We have to ensure that each and every local law enforcement official is following those sanctuary policies and we are seeing in Mr. Figueroa’s case that didn’t happen,” Hussain said.

Figueroa-Zarceno sued the city after he was detained late last year after his vehicle was stolen.

Pedro Figueroa-Zarceno walked into the police station on December 2, 2015 to recover his stolen car.

When he left the station, he was immediately taken into custody by U.S. Immigration and Customs Enforcement.

A document from federal immigration authorities released by his attorneys indicates that a San Francisco police officer directly contacted ICE and told them where to find Figueroa-Zarceno, the man’s attorneys and representatives said Wednesday.

That lawsuit has been introduced to the San Francisco Board of Supervisors. The settlement will be reviewed by the Government Audit and Oversight Committee, which will return the matter to the full board for a final vote in July.

Figueroa-Zarceno’s attorney believes there is a lesson to be learned here!

“It’s really important for San Francisco to remain a sanctuary city not in name only but also in practice,” said Saira Hussain, a staff attorney at the Asian Law Caucus, who represented Zarceno.

Hussain said her client’s case is not an isolated incident, and she hopes the settlement will encourage the department to follow its own rules and city ordinances. One recent case she mentioned was when an undercover officer, Joshua Fry, was caught on tape allegedly threatening to call immigration authorities on men in U.N. Plaza on May 5.

Personally, I hope the good citizens of San Francisco learn an entirely different lesson here, and start electing representatives that put their fiscal interests first, instead of sacrificing their hard-earned tax dollars on the altar of anti-Trump, progressive policies. Until then, only federal enforcement of new rules may persuade the city’s political elite of the folly associated with current ordinances.

Sanctuary Cities: Where the only refuge to be had is for those who don’t pay the taxes or follow the laws.

So we are now suing police for enforcing the law…
If I were the cops out there I would turn every illegal alien over to ICE. Let the city settle on each case and go bankrupt that much faster.

There is a Fox News report that mentions that the crime rate in Phoenix dropped when the city stopped being a sanctuary city.

Why aren’t these police officers given whistle blower status with their identity hidden to prevent retaliation by the city? Of course that may have happened and the attorney only knows that an officer reported the location of the illegal alien.

Methinks whistle blower status for police must be in the works.

You ought to tweet that suggestion to President Trump.

This is not going to help SF win their case against the Feds’ stripping them of funds for being a sanctuary city. They just settled a case by paying a hefty fine after admitting that they are.

San Francisco fought the lawsuit brought against it by the family of the San Francisco woman who was shot dead by a 5-times-previously deported, multiple-felon illegal alien.

But when an illegal alien sues S.F., they can’t turn over their citizens’ money fast enough.

Just think….this guy wins a settlement…and one of his buddies kills him for it.

I have no doubt the SF Board of Stupidvisors will approve the settlement. Listening to them on the news, they feel they and the city are above the law, federal preemption be damned. After all we are the city that celebrates our diversity and all are welcome especially if one is an illegal immigrant.
Illegal immigrants (but somehow not legal immigrants) we are told enrich the cultural fabric of the city.

That cultural fabric is enriched once a year on Cesar Chavez Day which is a state holiday. Cesar Chavez has achieved virtual sainthood in California. Cities throughout the state celebrate with parades and other festivities. In SF a parade is held in the heavily Latino Mission District with marchers dressed in traditional Mexican and Aztec costume. Food vendors line the streets. Traditional music blares everywhere.It is all in all a quite nice festival and a pleasant way to spend the day.

That is until the local politicians begin to speak. They eulogize Chavez as a champion of the immigrant and migrant farm worker as he fought for their fair wages and safe working conditions. Of course politicians never know when to shut up. Amid all the praise they say Chavez would be welcoming of the illegal immigrant. Wrong.

Chavez correctly believed that illegals would depress the wages of the workers he represented and his workers would be readily replaced by the illegals in any labor dispute. Chavez himself readily reported illegals to immigration authorities for deportation.