“someone who as a politician has championed horrifying actions” 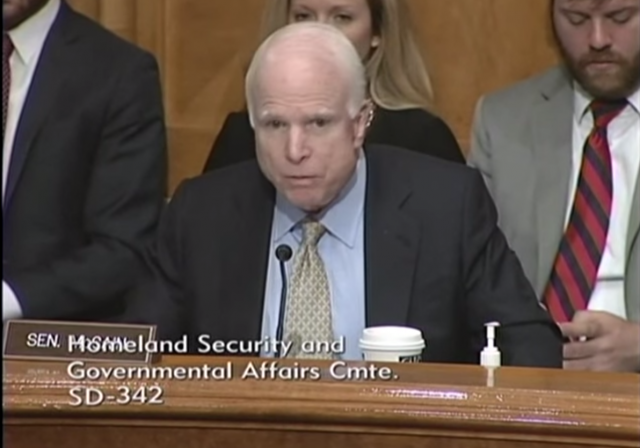 John McCain gets lots of criticism from both sides and some of it is fair. Calling him a war criminal however, is out of bounds.

A San Diego State University professor is facing a lot of criticism after he posted that he was ‘annoyed’ by the good wishes for Arizona Senator John McCain, who was diagnosed with brain cancer last week.

In a nearly 300 word Facebook post, Jonathan Graubart, a professor in political science, called the Republican Senator, who was captured and tortured during the Vietnam war, a ‘war criminal.’

“McCain is a war criminal and, more to the point someone who as a politician has championed horrifying actions and been lousy on state commitment to public health. So dying or not, he’s a visible public figure (I have no idea what he is like on the personal level and don’t care),” Graubart posted.

The controversial remarks are centered around the professor’s belief that society cares more about the elites than ‘ordinary lives’ using Senator McCain’s diagnosis as an example.

“But ultimately what troubles me is the urge to send such well wishes to an utter stranger as it reinforces the notion that some lives are more important than others. There are lots of people with glioblastoma and who have died from it (including my mother twenty years ago),” he added.

Since the post published last Friday, the professor has received tons of backlash. The SDSU’s College Republicans responded condemning his actions and called on the university to end ‘leftist’ culture on campus.

Based on his vote to keep Obamacare, I might go so far as to say he is a “Peace Criminal.”

We are well aware of Graubart out here on the West Coast.

Graubart is a repeat offender of the nastiest sort, one of these radical left-wingers that infest our campuses and brainwash students year after year into anti-everything leftist ideology. His forte over the years has been vicious attacks against Israel, espousing shamelessly the Palestinian narrative, cynically rejecting any objective analysis that would prove him wrong. While himself Jewish, he is a founding member of the San Diego chapter of the ultra pro-Palestinian group hiding behind the fig leaf name of Jewish Voice for Peace. His calling McCain a war criminal is typical: sloganeering and catchy, facile accusations is his kind of “academic” trade. SDSU should have shown him the door a long time ago. Unfortunately, he’s still in place, happy to spew his arrogant venom at every opportunity. He epitomizes what ails our universities.