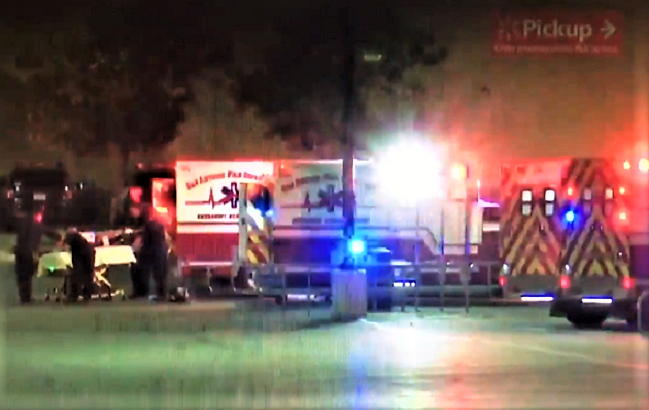 Thirty-eight people, eight of whom were deceased, were found in the back of an 18-wheeler in a San Antonio Walmart parking lot.  Temperatures reaching as high as 100 degrees and a lack of water are believed to have been the cause of the deaths.

Eight people were found dead Sunday morning inside a sweltering 18-wheeler parked outside of a San Antonio Walmart in what police called a horrific human trafficking case.

A total of 38 people had been inside the tractor-trailer, including two school-age children, authorities said. Twenty people were taken to area hospitals in critical condition, and another eight had “less critical” injuries.

The U.S. Department of Homeland Security is also looking into the incident. The driver of the vehicle, who was not identified, was arrested, according to Fox 29.

Since that report, the driver has been identified according to Heavy.com.

The case is being handled by the U.S. Attorney’s Office for the Western District of Texas, with the Department of Homeland Security, specifically ICE, investigating, along with local authorities. James Bradley remains in custody and charges, including those related to human trafficking, are expected to be brought against him soon, the San Antonio Express-News reports. A federal complaint is being filed, the U.S. Attorney’s Office told the newspaper.

“We’re working on a complaint right now. He’s in custody and he will be charged,” U.S. Attorney Richard Durbin said.

“The South Texas heat is punishing this time of year. These people were helpless in the hands of their transporters,” Durbin said in a statement. “Imagine their suffering, trapped in a stifling trailer in 100-plus degree heat. The driver is in custody and will be charged. We will work with the Homeland Security Investigations and the local responders to identify those who were responsible for this tragedy.”

It’s not clear how long the 38 illegal aliens were in the cargo area of the sweltering truck—it had no working air conditioning—before being found by a Walmart employee who had been asked by one of the truck’s occupants for water.

Breaking 2:28am – SAFD confirms multiple bodies found inside a trailer parked outside a Walmart in SW San Antonio. @KENS5 pic.twitter.com/Av8JviQt9f

An employee at the Walmart encountered a person who was disoriented and asking for water, San Antonio Police Chief William McManus said. The person said that there were people who needed help inside the trailer outside the store, which is located at I-35 and Highway 16 on the city’s southwest side.

When police arrived on the scene around 12:30 a.m. Sunday, they detained the driver immediately and searched the trailer to find several people in various stages of medical distress. At least 29 fire units and two AirLIFE choppers responded to the scene to take care of the victims.

Eight victims were pronounced dead at the scene, and officials said all of the deceased are believed to have died as a result of heat exposure/asphyxiation. Their bodies were taken to the Bexar County Medical Examiner’s Office to be examined so a cause of death can be determined.

Store cameras picked up a number of vehicles picking up people who had been in the trailer, and police are working to identify these vehicles and their owners.  ICE and Homeland Security are also looking into the incident.

McManus called the incident a “horrific tragedy.” He said store surveillance video showed a number of vehicles arriving at the parking lot and picking up people who had been in the trailer. Police were working to identify those vehicles.

McManus said the trailer appeared to be a smuggling operation. He said the people in the trailer would be reviewed by ICE agents to determine their immigration status. Also, it was announced later Sunday morning that the Department of Homeland Security was taking the lead on the investigation of the incident.

The reaction on Twitter has been focused on the need to secure our border and #BuildTheWall.

They'd still be alive, if we had a wall. At Least 8 Are Found Dead in Truck at Walmart Parking Lot in San Antonio – https://t.co/1hKnYmG4wy

A ninth person is confirmed dead (via Fox News).

I just updated the post with reports I’ve seen of nine dead. Where did you see that it is 10? I will update again, though I wouldn’t be surprised if still more succumb to heat-related issues in the coming hours and days. What a horrible thing!

“An initial report that two more people had died was the result of hospital error, according to Homeland Security, who asserted that just one more person had died, putting the death toll at nine.”

If you have to get baked, the Cheech and Chong van is way preferable.

And every “sanctuary city” politician and voter is complicit in these horrible deaths.

victim less non crime –
move along nothing to see here,
the bodies will be available for viewing by the SJW crowd later today.

Gee, maybe we ought to have checkpoints at all border crossings? Is that too much to ask?

Every official border crossing is a checkpoint. There are others 100+ miles inside Texas. I find it almost impossible to believe a tractor trailer brought them all in to begin with, it would have to go through at least two border patrol stops. Sure you can sneak a bag of drugs but 38 people? Seems to me they got in the truck after the checkpoints. Plenty of illegals walk hundreds of miles after crossing over, this total group could have been picked up from a series of places.

No, nobody got in the truck after it crossed – the survivors will recount a tale of how they were all locked inside deep in Mexico by the coyotes. (this is far from the first time this has happened in Texas; it happens every summer, as I recall)

Trailers full of immigrants like this sail through every day, probably every hour. And border guards are paid to look the other way.

This is why the wall will never work; getting through the checkpoints is still ridiculously easy, just takes some cash.

So hillary clinton is now a border guard?

Let me tell you a not-so-secret secret: There are NO undercover operations designed to root out this kind of corruption, ever. They just aren’t done.

Here’s another not-so-secret secret – most of the border guards, especially in Texas, are recruited from the people who live nearby, because who else wants to live down in the valley? Meaning a LOT of the current border guards have got a LOT of relatives on BOTH sides of the border. When Cousin Juan brings a truck or two across, it’s easy to look the other way. Especially when he gifts a $37,000 per year border guard with 50 big ones for a single truck, the rumoured standard payout for a big drug shipment.

All of the cartels have got members who hold relatively high ranking positions in our government, especially those agencies that are concerned with the border. We’ve ignored the problem for decades.

Why do you think it was so easy for the ATF to ship guns to the cartels under Obama, in the scandal that was covered up so clumsily? It was the Cartel’s own people inside the ATF who got chummy with Obama’s people and set it all up. They’re still there, running things from the inside like they always have.

Laughing here. Yeah. Trailers and trailers and trailers full of human beings sail through the border every day all the way to San Antonio and who knows where else. Sorry, do you seriously not understand how hot it gets in the back of a 18 wheeler stuffed with people (easily up to 170 degrees), or how far it is from the border to SA (almost 300 miles)? I was just down at the border two weeks ago and talked to BP at lunch one day. He talked about BP catching trucks full of people. This has been in the news. He said he voted for Trump and was so glad someone had their back. He didn’t say “my back” he said “our back” meaning the BP. Maybe he was lying so he could fool me. How come BP catches one truck but lets the next 20, 50, 70, 100 or however many trucks full of people through? How come they’ve started catching more truck smugglers now vs. a year ago? Just to keep appearances? Have you seen BP actually detain illegals on the border? I did two weeks ago at Anzalduas Park near Mission. Were they using plastic toy handcuffs just to fool me again?

There’s a practical reason you can’t shove dozens of human beings in trucks every day and drive them for hours in the middle of summer in freaking Texas – they are delivered dead. Happened a while back in Victoria. Not good for the smuggling business.

Instead of pulling things out of your rear, how about providing something concrete instead of what you imagine is going on.

300 miles is an easy ride to do from 11 pm to 6 am, with vents on the roof, temperatures will be tolerable the whole way even in the middle of summer. This driver killed them by not letting them out periodically, like he was supposed to.

Tom, you ave no clue what you’re talking about. From a news story today:

“Homan said it was unlikely the truck was used to carry the immigrants across the border into the United States. He said people from Latin America who rely on smuggling networks typically cross the border on foot and are then picked up by a driver.”
http://www.wptv.com/news/state/james-matthew-bradley-jr-of-clearwater-charged-in-smuggling-related-deaths-of-10-immigrants?page=2

Bonus dark, old, joke from the Texas Border – want to know the best way to smuggle a nuclear weapon inside the United States?

A: Hide it inside a bale of Marijuana

Democrats are in mourning. They’ve lost 9 new voters so far.

Now we have to provide medical care for the other 20.

And how many Americans would have been victimized by the 30 illegals in that truck if they managed to evade authorities?

For the sake of the children can’t we just build the wall.

Typically these people become slave-laborers, sex-workers or share croppers, etc. Most don’t get “benefits” from the state (which is also illegal) unless they are in a “sanctuary city” like San Antonio, so they live in fear and abject poverty – at best.

So, how are these “human trafficking” operations any different than the slave ships of old? Only by the cargo, it appears to me…..

Democrats, once again, support slavery; but this time it is not from Africa, but from Mexico.

It looks like this is a case of illegals paying criminals to smuggle them into the country. In which case it’s not “human trafficking”; that’s something else entirely.

Probably part of the press campaign to pretend that illegals are just poor victims, rather than criminals in their own right.

You pays your money and you takes your chance, eh?

These illegals should be charged with murder. They were committing a crime and people were murdered during the commission of the crime.