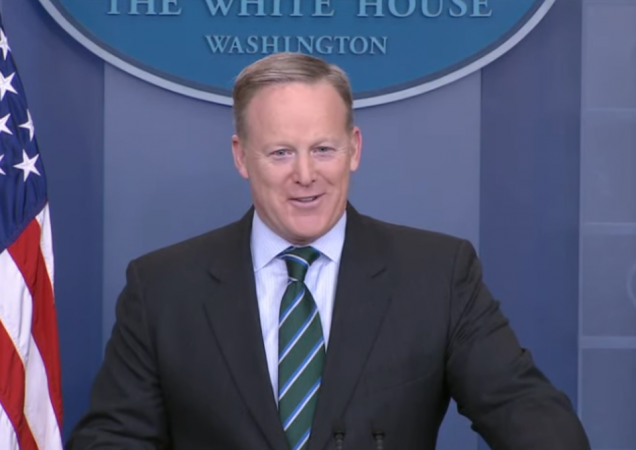 The New York Times has reported that Sean Spicer has resigned from his press secretary post.

Mr. Trump offered Mr. Scaramucci the job at 10 a.m. The president requested that Mr. Spicer stay on, but Mr. Spicer told Mr. Trump that he believed the appointment was a major mistake, according to person with direct knowledge of the exchange.

It's been an honor & a privilege to serve @POTUS @realDonaldTrump & this amazing country. I will continue my service through August

Mr. Spicer told the White House communications team about his decision on Friday morning, another official said. Mr. Spicer thanked his team and said he would help with the transition, as the team gave him a round of applause, the official said. Reince Priebus, the White House chief of staff who clashed with Mr. Scaramucci during the campaign, then introduced the new communications director to the full team.

Scaramucci announced today that Sarah Sanders has taken over:

ABC News reported this morning that Scaramucci accepted the position. From Business Insider:

White House Chief of Staff Reince Priebus is reportedly also not a fan of Scaramucci’s.

The White House didn’t immediately respond to a request for comment.

CNN quietly retracted and deleted the story the following day:

That story did not meet CNN’s editorial standards and has been retracted. Links to the story have been disabled. CNN apologizes to Mr. Scaramucci.

Wonder if Scaramucci can do the Fandango? Thunderbolt & lightning very, very frightening me
Galileo…..
Happy Friday 🙂

So we see the #FakeNews from the MSM. Now we wait for the real story.

Ya, those news reports left out all the critical details, such as why Spicer doesn’t like Scaramucci.

Also, do they even still have weekly press briefings? If so, why? All they are are media pile-ons, they have no value and serve no purpose.

I think the stated claim for the unhappiness is that Scaramucci didn’t have any “political or organizational” experience. So Spicer didn’t think he should have to answer to him.

Of course Spicer and the rest of the critics ignore the fact that everyone with DC “political and organizational experience’ has been giving Trump really, really bad advice from the start, generally always being “you better do what the establishment tells you to do!!!”

Scaramucci is smart, an outsider, and he’s already proven he won’t let himself be pushed around. That’s 3 – 0 over Spicer right there – Although I will miss the twitter feed of Sean Spicier.

Ah. Spicer didn’t like Trump bringing in an outsider. Adios Spicer, you whore, we won’t miss you.

Is Scaramucci going to be Spicer’s replacement?

Hard to say at this point – he was hired to be Spicer’s boss, essentially, and now Spicer got mad and went home. So, it could play out several ways.

If it means the chubby girl on SNL is out of a gig I’m good with it.

Two thumbs up if I could!

Heck yeah! I’m down with that.

Sad. The only good thing about SNL, really. Never failed to crack me up.

Oh, please tell me the Sean Spicier twitter account managed to glom onto a Scaramucci account to keep up the fun, although renamed. Or if he keeps tweeting on Spicier, I’m happy 🙂

One of the things I hated about Spicer was his inability to stick with the rules that HE made. He had a rule that the airheads could ask one question and maybe a follow up on that question. He soon let it sink into anarchy and reporters were asking three four and five questions not based on any follow up. He would get testy but not authoritative like a parent with unruly children. It wasn’t professional nor interesting to watch. Huckabee does a better job of not getting ruffled feathers and stays calm and cool.

Yeah, that often disgusted me seeing those reporters seemingly become more the ruling force in those pressers.

It’s a jungle out there – you need someone as communications director who is comfortable in the midst of the bruising chaos. Sean Spicer, I’m sure is a wonderful person – but also seemed very uncomfortable in that arena. Uncomfortable and ineffective. Trump needs someone who really can’t fight for him there. Scaramucci on the other hand, seems very comfortable. With all the crap Trump gets, he needs staff who can help him in a very negative environment.

Interestingly, Anthony Scaramucci, like his boss, has been a blue=blooded New York Progressive.

But he did call T-rump a hack. Which he’s “converted” from now.

Ah, well. T-rump is brilliant…he’s so brillant, you can’t even understand how brillant. He’s always got a plan. Yeah, and its such a great, great, great plan that you’ll get tired of all the planning!

Oh, and like his new boss, Scaramucci has been a contributor of money and influence to Deemocrats over the years.