“‘engaged in systemic violations’ of the Hatch Act” 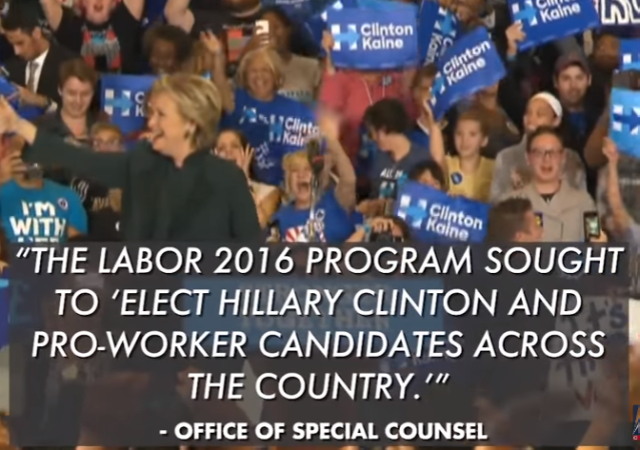 A new report from the Office of Special Counsel claims employees of the United States Postal Service were allowed to take time off from work to campaign for Hillary Clinton and other Democrats during the 2016 election.

Postal Service broke law in pushing time off for workers to campaign for Clinton, investigation finds

High-level postal officials had for years granted employees’ requests for unpaid leave, leading last year to an “institutional bias” in favor of Clinton and other Democrats endorsed by the National Association of Letter Carriers, one of the largest postal unions. The Postal Service’s Office of Special Counsel and inspector general found that the agency violated the Hatch Act, which restricts federal employees from working for or against a political candidate or party during election season.

“The culture and practice was, ‘It’s mandatory, it’s the directive’ ” to ensure employees got time off, Adam Miles, acting director of the Office of Special Counsel, told Senate lawmakers at a hearing.

The investigation found that 97 letter carriers took time off, sometimes weeks, to take part in the union’s Labor 2016 program, canvassing, making phone calls and working on other get-out-the-vote efforts to help elect Clinton and other pro-labor candidates. The workers were dispatched to battleground states, including Florida, Wisconsin, Pennsylvania and Ohio. They were reimbursed for their unpaid leave by the union’s political action committee.

Federal employees, including postal workers, are allowed to use their time off to campaign or donate to political candidates. But by directing that time off be granted even over the objections of local post office managers who said they would be understaffed, the Postal Service showed a workplace bias toward Clinton and other Democrats endorsed by the union, Miles said.

Brooke Singman of FOX News has more on how this came to light:

The OSC determined the USPS “engaged in systemic violations” of the Hatch Act, a federal law that limits certain political activities of federal employees. While employees are allowed to do some political work on leave, the report said the Postal Service showed a “bias” favoring the union’s 2016 campaign operation.

The investigation was launched months ago after Senate Committee on Homeland Security and Governmental Affairs Chairman Ron Johnson, R-Wis., brought constituent complaints to the OSC in October. The constituent, identified as a USPS employee, was concerned the Postal Service “incurred unnecessary overtime costs” and “improperly coordinated” with the National Association of Letter Carriers (NALC) when it released members for several weeks of “union official” leave without pay to participate in campaign work.

One notable aspect of this is where the campaigning took place. Battleground states:

According to the report, 82 percent of the work took place in 2016 battleground states: Florida, Nevada, North Carolina, Ohio, Pennsylvania and Wisconsin.

This video from FOX News explains the legal aspects of the report:

Some people, including yours truly, are surprised that the Washington Post even reported this story but the guy below won the internet with this comment via Twitchy:

Thanks Mike for reporting this.

I do believe from evidence I have, that some public state colleges broke the law by cancelling classes on election day. (That would be a day the colleges are “paid” by taxpayers to do “education of students” on….) They cancelled classes – but did not cancel work for employees that day.

That meant moving some voting stations that normally were on those college campuses – stations used mainly by poorer, and minority voters……..

The investigation was launched. A conclusion is announced. The Hatch Act has been violated.

And not one of these damn scofflaw leftists who colluded to elect Hillary will face any consequences.

Of course not. Because RUSSIA!™

Time to privatize this behemoth, or eliminate it altogether. Private enterprise can do a much better job.

Who’s going to get fired?

That’s a great question that is wholly within the bailiwick of POTUS.

Maybe if we throw a few rallys where we all chant “lock them up” we could at least feel like something is being done to these criminals.

If Lois Lerner is the example, somebody at the USPS might be forced to retire with full benefits. That will really slap the swamp into following the law!

The Office of Special Counsel (OSC) report revealed the U.S. Postal Service (USPS) exhibited an “institutional bias” in favor of Clinton’s campaign by allowing approximately 97 of its employees who were members of the National Association of Letter Carriers (NALC) union to request leave without pay to campaign for Clinton and Democrats in other races.

The NALC compensated the 97 USPS employees for their time spent off the job promoting Clinton’s candidacy by pulling funds from the NALC’s PAC, Letter Carrier Political Fund. The NALC officially endorsed Clinton in her campaign against President Donald Trump, and gave its nod to other Democrats as well.

USPS broke the law? Who, exactly, will be held accountable? And what will be the punishment? Trying to punish the USPS would be like punching a marshmallow.

There are managers and decision-makers with paper trails.

This isn’t even hard. Lawyers do this every day.

What’s the legal relationship of USPS employees to the Federal government? Isn’t the USPS a sort of NGO? Does the Hatch Act actually apply to them?

Isn’t the USPS a sort of NGO?

No, it’s pretty much the exact opposite of an NGO — it belongs to the government. Perhaps you meant to write “state-owned enterprise”, in the sense of a normal business that operates like any other business, but whose shares happen to be owned by the government. But no, USPS is a government agency.

Would it be a violation if the policy were strictly neutral, with unpaid time off for any employee who wanted to campaign for anyone, even if in practice few if any employees wanted this to campaign for Republicans? After all, that would hardly be USPS’s fault.

What if the time off were not available to everyone, but only to those the NALC asked for, pursuant to USPS’s contract with it? On its face that would also seem to be neutral, since the NALC could endorse Republicans if it liked. It’s hardly USPS’s fault that it didn’t.

Workers on their own time aren’t in violation of the Hatch Act.
USPS has been hamstrung by the 2006 law forcing prepayment of future retiree health benefits, causing staffing to be cut to the bone. Staffing is clerks , carriers , and mail handlers…NOT management staffing BTW.
Any time allowed off would need to be replaced with other workers to do their job. The replacement workers are NON-Career employees who make half a regulars salary, are undertrained, and overworked already. Of copurse overtime was needed, with staffing levels at such a low level.
The UNION of course supported Clinton, as Trump is against Unions…that’s a no-brainer there.
This has been happening for years, and it’s never been an issue until a Trump supporter whined because he likely was forced to work in place of someone with APPROVED time off.
Unless the Hatch Act laws were broken, which is highly in doubt unless you listen to the news outlets you all call FAKE News already…this is really a non issue.

“The UNION of course supported Clinton, as Trump is against Unions…that’s a no-brainer there.”

Nope. T-rump has no issues with unions. In fact, he seems to love them…in their proper place. He’s always had very cozy relationships with some of the most corrupt unions in the U.S., which was one of the things Roy Cohn (mob lawyer) helped him with.

OK, we have a massive organization that has never once made a profit or even covered their own costs. They allowed this in their employees contract: Federal employees, including postal workers, are allowed to use their time off to campaign or donate to political candidates.

Why? Anyone who runs a business in the private sector would never allow their workers to all leave for the day, it’d cripple your business. I don’t care who they campaigned for. Clearly this is another part of the swamp that needs draining.