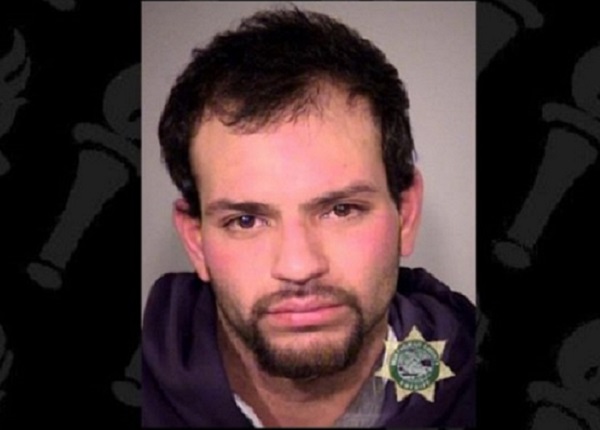 Sergio Jose Martinez, a 31-year-old illegal alien, has a criminal record and has been deported 20 times.  Portland, Oregon, however, prides itself on its “sanctuary city” policy, and Martinez was released into Portland despite a 2016 ICE detainer.

Martinez then broke into a 65-year-old woman’s home, brutally raped and assaulted her, and stole her vehicle.  Before being caught by police, he allegedly assaulted another woman.

A man accused of breaking into a 65-year-old woman’s home, sexually assaulting her and stealing her car was arrested after allegedly assaulting another woman and running from police.

Sergio Jose Martinez, 31, was caught July 24 after officers chased him through a neighborhood.

According to court documents filed in March 2017, Martinez has a history of illegal entry into the United States. He has been a transient in the Portland area for more than a year and has been deported 20 times.

Martinez has at least five probation violations for re-entering the United States. His most recent removal was in November 2016, according to the March court documents.

Immigration and Customs Enforcement (ICE) lodged an immigration detainer against Martinez, asking authorities to notify them before releasing Martinez to allow ICE to take him into custody. The Department of Homeland Security said a detainer was requested for Martinez in December 2016, but he was released into the community and authorities did not notify ICE.

Earlier this year, Multnomah County leaders and Sheriff Mike Reese wrote a letter to the community saying, “The Sheriff’s Office does not hold people in county jails on ICE detainers or conduct any immigration enforcement actions.” [emphasis added]

Martinez has a string of prior convictions and faces new charges for his latest crimes.

Prior to the July 24 arrest, Martinez’s criminal record shows a felony conviction for burglary and three misdemeanor convictions for battery, theft, and obstructing a public officer. The court document also said he told investigators in March that he has a long history of using methamphetamine and was currently using on a daily basis.

Police said Martinez broke into the 65-year-old woman’s home in the 1700 block of Northeast Irving Street Monday morning and physically and sexually assaulted a woman before stealing her 2011 silver Toyota Prius.

Court documents said Martinez entered the woman’s bedroom through a window that she left open due to the heat. He spoke “calmly and quietly,” ordering the woman onto the ground, where he tied her hands and feet, and blindfolded her.

Martinez threatened to kill the woman while he sexually assaulted her, according to the probable cause affidavit. Before he left, he punched her in the head several times and slammed her head onto a wood floor.

Martinez’ second attack took place in a parking garage, where he assaulted a woman who was going to her car.

In the second attack, a probable cause affidavit states Martinez was waiting in a dark corner of the parking garage and approached a woman saying he just wanted to talk.

The woman offered Martinez money, her phone and computer, but he threatened to kill her and forced her to get into her car at knifepoint, according to court documents.

A probable cause affidavit states the woman kicked Martinez in the midsection, but he said, “you shouldn’t have done that,” and again threatened to kill her.

The woman hit the panic button on her car before she got in. Court documents state she got out of the car, but Martinez tackled her and slammed her head into the ground.

People nearby heard screams and rushed in to help, causing Martinez to run away. When he was caught by police, he was carrying a 6-inch knife and items stolen from both victims, according to a probable cause affidavit.

Fox 12 also reports that Martinez is a meth and heroine addict with “at least 5 probation violations from re-entry” to the U. S. from Mexico.

This is the exact sort of criminal alien that Kate’s Law is intended to keep off the streets.  Kate’s Law passed the House last week, but only 24 Democrats voted for the law.

House Republicans took action Thursday to crack down on illegal immigrants and the cities that shelter them.

One bill passed by the House would deny federal grants to sanctuary cities and another, Kate’s Law, would increase the penalties for deported aliens who try to return to the United States.

Kate’s Law, which would increase the penalties for deported aliens who try to return to the United States and caught, passed with a vote of 257 to 157, with one Republican voting no and 24 Democrats voting yes.

Kate’s Law is named for Kate Steinle, a San Francisco woman killed by an illegal immigrant who was in the U.S. despite multiple deportations. The two-year anniversary of her death is on Saturday.

Excellent argument for my idea; illegal convicted of a serious crime AGAIN…???

Life in prison here. No “catch and release”. No relying on any other nation to do the right thing.

You are here from now on, darlin’. I the iron-bar Hilton. For your remaining days. Every. One.

Fence off a ten-mile-square (100 sq. miles) of Arizona/New Mexico with a No-Sparrow-Shall-Fall barrier, then dump these criminals in to sink or swim among their own.

Many men enter, no one leaves. Ever.

Rags, I love your idea, but from a practical standpoint, wouldn’t this “repeat illegal alien serious offender” law have to be a *federal* statute? I say this because I doubt the state legislatures of CA, WA, OR, NJ, NY, MA, etc. would ever pass such statutes. Your thoughts?

It would be a good Federal statute, but I don’t see any need to limit it.

States could and should adopt it, too. Would they all? No tellin’. Some states are nuts.

My haters are busy down-thumbing comments they don’t have the sand to refute.

How pathetic is that, really?

when you make serious sensible posts, i up thumb you as should others to distinguish between your nutty ones.

BUT HOW ABOUT CRIMINAL AND CIVIL LIABILITY for the “people” that ALLOWED THIS !

They’ve all got immunity.

In the end, it’s all in the disclaimer at the end of the movie: “No government officials were harmed in the commission of this crime.”

How sentencing him to house arrest, in the sheriff’s house, or in the home of a prominent Democrat.

The consequences of the reckless actions of Sheriff Mike Reese (who is well armed) are paid by others (who he wants unarmed.)

A proud liberal in action.

This is what Oregonians want. They voted for it, they support it. Other states need to send their illegals to the West Coast states if we cannot deport them.

As far as an illegal invader caught and convicted of another crime again, deportation can be made to work. Just surgically sever both achilles tendons and palmaris longus tendons before sending them home. It reduces recidivism.

Yeah, I know I am going to be called all sorts of nasty things.

File obstruction of justice charges against the officers that released him and any in the chain of command who ordered or passed on the order not to enforce ICE detainers.

They may get off, probably will, but let the process be the punishment.

Not to mention the countless ways they burden society by consuming resources related to public education, law enforcement, public aid, etc. then don’t bother contributing to society through paying taxes (God alone knows how many are paid under the table), and by and sending a hefty chunk of their earning back to Mexico to prop up that hellhole.

We should never concede the word ‘immigrant’ to any foreign nationals who scoffs our nation’s sovereign borders much less certified criminals. Not ‘undocumented immigrant’ or ‘illegal immigrant’.

Always call it like it is. Illegal Aliens. To do otherwise is to abandon moral clarity on the issue.

We should build the border wall from Brownsville right up to the Kali border. Then the border wall should head north along the Kali, Oregon, and Washington just short of the Canadian border. We can use eminent domain for a good purpose for once; seize a small strip of land that the feds can declare a a national defense installation and build another wall just short of the Canadian border to the Pacific.

And then dump all the illegals we apprehend in those states since they want them so much.

Why not compromise on the border wall? Build giant solar farms and wind farms along the entire length of the border between the US and Canada. The people on the right get their fence and the people on the left get the investment into green energy they’ve always wanted. Win-win for everybody.

Fantasizing about what a responsible government should do is like talking about the weather. “Tut-tut, it looks like rain …” It accomplishes nothing.

People nearby heard screams and rushed in …

It sounds like somebody is doing something, even if officialdom won’t.

At least as long as it’s allowed to do so.

Until you make illegal entry into the US a felony then there is nothing that will change. Deport them they come back. Lock them in prison then they’re on the taxpayers dime, getting healthy and learning how to be a better criminal.
Forced labor camps, hauling supplies for the wall for a minimum of five years, add time for bad behavior no reduction in time for any reason. They can live in tent cities and get the same basic accommodations the troops have on a FOB overseas.
You want to come to the states for a better life? Do it legally. Don’t want to do it legally help build then deport you to the EU so they can fill their quota of immigrants.