Nothing funny about a procedure that murders an unborn human being. 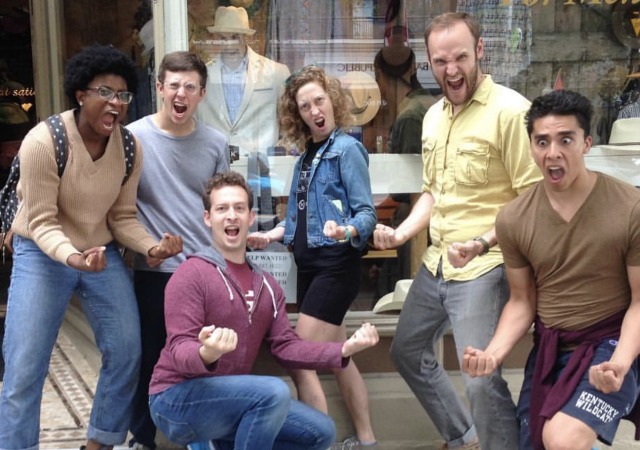 The local Philadelphia theater company Lightning Rod Special has announced a new play it will debut in August…a musical comedy about abortion. From Philadelphia Magazine:

The abortion musical has its roots at the Pig Iron School for Advanced Performance Training, where [co-creator Alice] Yorke and the co-creators studied. Yorke says it was there that she developed a character of an “irate gun-toting fetus running around and shouting about how it would kill anyone who tried to hurt it.”

In those early days, there was also a Busby Berkeley-inspired song-and-dance kick-line of fetuses, though Yorke isn’t sure that it will be included in the final version.

Yorke explained to the magazine that the musical is not “pro-choice propaganda” while co-creator Scott Sheppard assured readers that the group “pulled back a bit on the politics” in it:

“We’re definitely, as makers, on one side,” Yorke admits. “But we’re trying to ride a funny line. This isn’t self-congratulatory. I want us to examine why we feel this way. I want people to reckon with themselves. This is a show about personhood, the right to bodily autonomy, and the violence of the partisan politics that surrounds this issue.”

“We don’t wanna serve up this didactic play that pats liberals on the back,” insists Sheppard, 33, also of South Philadelphia. “Abortion is hard. One one side, you have people who think that murder is happening. On the other side, it’s people thinking about women’s health. This is already a terribly divided debate. We didn’t want to just add heat to that fire.”

Yorke told the magazine that the group had a hard time raising funds for the musical. She cried that “good, liberal foundations” turned them down and that everyone “is just so, so afraid to talk about abortion.”

Or maybe everyone knows that this isn’t a light issue that you can attach humor to? Just my two cents.

Oh, and the group cannot come up with a name for the musical:

“We were going with ‘Fetus Chorus,’” explains co-creator Alice Yorke, pictured below. “But there were a lot of mixed feelings about it. The best comment we got was, ‘I understand you want to provoke your audience, but do you want to do that in the theater or before they even get there?’”

Yorke, a 31-year-old South Philadelphia resident, tells Philly Mag that the company is currently debating other titles. Her favorite is “The A Word.” Others in the mix: “Baby Girl,” “Mine,” “Monster,” and “Wanted.”

Unfortunately, this group is not the first to put inject humor into the abortion topic. D.C.-based Theatre Prometheus founder and artistic director Tracey Erbacher developed the idea for Abortion Road Trip after the presidential election. She tried to justify an abortion comedy because “[L]aughter is a positive tool” and that murdering unborn humans “doesn’t have to be tragic” or even “the most difficult choice a woman can make.” She continues:

Sometimes it can be funny.

Sometimes it can be serious.

Sometimes the choice is easy, or nuanced, or exactly right.

Our power as artists lies in the choices we make about the stories we want to tell. And now, right now, we think we all need a comedy about abortion.

Flanders said the idea for the abortion musical began as a “raunchy joke” with her peers, and she felt hesitant at first to write about such a controversial subject. Eventually, though, Flanders said she thought comedy would add something new to the abortion debate.

“Abortion is an issue that has no shortage of serious discussion,” she said. “We realized early on that we didn’t want to simply rehash the debates or have the audience leave the theater feeling that they had been preached to. We want people to feel entertained and elevated. Honestly, comedy is the only avenue left for a fresh take on the issue.”

She continued: “No matter what your politics are, everyone can relate to the feelings of the first time you have to stand up for yourself and put everything on the line. We poke fun at both liberals and conservatives equally …”

Once you accept that all attention is monetizable and career-advancing… this is what you get.

Next up – a rousing bit of slapstick called “There’s something about Auschwitz”.

I was kinda thinking about a hilarious comedy dealing with lynchings in the Jim Crow South, as long as these enlightened baby killers think that murder is a laughing matter.

And after that, a musical comedy about child molestation.

Why do they never make a musical about MY favorite form of mass murder: global thermonuclear war?

Do you want to play a game?

How can anyone be so brainwashed to not be able to see this is a tasteless, dehumanizing, demoralizing, and disgusting topic.

And what groupthink! “And now, right now, we think we all need a comedy about abortion.”

Gotcha. So, that must be the message they are hearing droned into their numb skulls………..

Life is meaningless to these inhuman monsters.

(I bet they don’t even see the irony of naming such a “musical comedy” with the title, ‘Monsters.’)

Islam & abortion: there is NOTHING funny about either one.

Oh, and the science is observable and reproducible in a limited frame of reference. Human evolution begins at conception.

So, the question is when and by whose Choice does a human earn and retain the right to life?

When do they sing the Horst Wessel song or “The Future Belongs to Me?”

There is absolutely NOTHING funny in any way about abortion.

I can just imagine how terrible this writing is going to be. Gross.

On the other hand among my veteran friends with their dark dark humor I hear abortion jokes in plenty. Never really sits well with me.

The bottom-line is that elective abortion, not limited to termination of human life from conception to birth, is a natural right. It is also a human rights issue. Elective abortion of a wholly innocent human life, especially when it lacks a voice to protest and arms to mount an effective defense, is unconscionable.

We cannot prevent elective abortion, including murder, manslaughter, etc., in many and most cases. We can, however, discourage that Choice, and offer penalties to reduce any perceived incentive. We should at minimum forgo normalization or promotion/advocacy of this dysfunctional behavior at best and corrupting behavior at worst.

So, should the behavior be normalized (i.e. promoted), tolerated, or rejected?

The Left adds to its repertoire for its Theater of the Absurd.

There ain’t anything funny about abortion.

They’re approaching this ALL the wrong way. The *only* comedy about abortion that would be even remotely funny is one that mercilessly mocks the pro-abortion crowd as the idiots they are, and satirizes the logical contortions they have to perform to try to justify this barbaric act.

Yorke told the magazine that the group had a hard time raising funds for the musical. She cried that “good, liberal foundations” turned them down and that everyone “is just so, so afraid to talk about abortion.”

Imagine that. It either won’t open, or will close after a “limited run” of one evening. These “people” (I hesitate to use the term) are sick.

1) The Funny Side of Terrorism

3) How Daniel Pearl Lost His Head