Females can be badass, strong, and powerful without the superpowers. 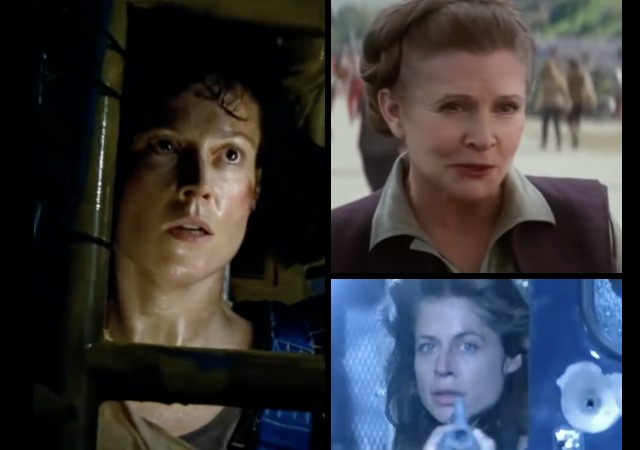 I have noticed lately that people are happy about Wonder Woman since she provides young girls with a positive role model. I enjoy that, too, but she has superpowers. I have no problem with young girls looking up to her, but it’s unrealistic. Whether we like it or not, kids of both sexes look up to actors and actresses as role models.

How about ordinary females in lead roles who overcome adversity without the help of superpowers? One blog I came across pointed out that these superhero females still give females the “short shrift.” Females can be badass, strong, and powerful without the superpowers. To me, those are better role models.

Ellen Ripley in the Alien Franchise

How? How can ANYONE forget badass Ripley in the Alien franchise? A blog from the AMC channel declared that Ripley is the best female character in a science fiction movie. I think she’s the best female lead in history.

The best part? She isn’t a fantasy version of a female as the AMC blog points out:

Science fiction film is filled with hot kickass women doing impossible things with guns and melee weapons while they spin about like a gymnast in a dryer. As fun as that is to watch, at the end of the day it’s still giving women short shrift, since what they are then are idealized killer fembots rather than actual human beings. Ripley, on the other hand, is pushy, aggressive, rude, injured, suffering from post-traumatic syndrome, not wearing makeup, tired, smart, maternal, angry, empathetic, and determined to save others, even at great cost to herself. All without being a spinny killbot.

In the second movie, Aliens, Ripley also exerts the maternal extinct that is natural in a female. She finds Newt, a lone survivor, and becomes attached to the child, even risking her life to save the child. The showdown even includes one of the best lines in cinema history:

She’s a princess, but you often forget that in Empire Strikes Back and Return of the Jedi. A princess for the people, Leia places herself on the front line and does everything she can to defeat the evil empire.

She gives girls a strong female to look up to. Surrounded by males, Leia doesn’t back off and emerges as a powerful leader.

Terminator 2 is one of the best movies ever, but not because of Arnold. It’s because of the fierce and strong Sarah Connor! From Badass of the Week:

Sarah Connor is resourceful, another key component of badassery. It takes serious ovarian fortitude (read: nuts) to steal a paperclip, hide it in your mouth and use it to break out of a mental institution despite the fact that all of your appendages are locked into restraints. She’s like a female MacGyver, except instead of a ruler and a hockey ticket she uses a syringe full of cleaning solvent and a human shield to bust out of a tight situation. Plus she’s pretty fucking tough. When the T-1000 jabs her in the shoulder with his finger that turns into a knife and tries to torture her for information? Sarah Connor doesn’t give a shit about that either! She just uses her one good arm to try and reload her bigass shotgun so she can blow his nonexistent nuts off. She even manages to get away and try to save her kid. I think if the T-1000 stabbed me in the shoulder I would probably just piss myself.

Yes, Holly Golightly from Breakfast at Tiffany’s. Think about the era when the book and movie came out. It was a time when society expected the female to remain at home, become a housewife, and raise children.

Holly defied that as a free spirit, a female who refuses to be in a cage. She wants love, but doesn’t want to belong to anyone. She shows that it’s entirely possible for a female to keep her independence and fall in love. Here is the final scene of the movie:

The Color Purple, a masterpiece in literature and film. And Celie Harris Johnson is a female lead that had to overcome every possible adversity to find herself.

Men oppress Celie her whole life, including her supposed father who rapes her and gives away their children. Her husband Albert uses her to raise his own children. With the help of Shug Avery, Celie learns how to become a strong and independent female, even set up her own sewing company.

My favorite movie of all time! Yes, Dorothy Gale from Kansas is a great female lead who has no problem berating anyone who messes up or is rude to others. She also exposes a fake wizard!

Look at what she does in the forest. They meet a lion, who at first looks fierce. She hides, but when the Cowardly Lion starts to chase Toto, who cannot defend himself, she has no problem slapping the crap out of him!

And the way she stands up to the Wizard when he trashes the Cowardly Lion. Dorothy doesn’t care that she is speaking to the great and powerful wizard. You disrespect her friends she will unload on you.

Then she kills a witch! How? By throwing water on the Scarecrow after the Wicked Witch lights him on fire.

PAY NO ATTENTION TO THE MAN BEHIND THE CURTAIN! Don’t tell Dorothy what she cannot do. She will expose and scold you for being fake and lying to everyone.

But they can’t be badass without scriptwriters.

In real life women just cry on the job and stuff themselves full of cake when they aren’t running to HR to fight their battles for them.

I started my job of forty years in 1967. It was hard. It was a man’s world. But I kept my nose to the grindstone, took advantage of my employer’s openness to helping those who wanted to better their positions and worked my way from lab receptionist to echocardiography with several twists and turns in between. All without whining!

You never met my wife – cans, hunts, fishes, and still cleans up for town. Come to Texas and meet a lot more like her.

She rides, she flirts, she shoots, she loves, and she won’t stop …tomorrow being another day…

Qualifies as an accomplished parasite, certainly.

Dangerously parasitic (rather than symbiotic) women later became one of the staples of Film Noir.

If these characters are rôle models, well, that might explain a few things about the modern world.

Cora Monroe in “Last Of The Mohicans”

Most anyone Maureen O’Hara played

Four movies and Lt. Ripley still can’t figure out how to beat that damn rubber alien.

Somehow I can’t visualize a franchise built around John Wayne invariably being bested by the banditos.

Of course not. A LOT of ladies are “bad-ass” in the sense they are tough, courageous, and even lethal.

Terminator 2 has perhaps the greatest nightmare scene in the movies.

I don’t think I’ve ever seen an article on film more in dire need of fisking.

Would Nurse Ratchet be on this list if you’re a feminist?

Having strong leads in movies for modeling good character is all fine and dandy. But it still buys into the idea that you need someone else’s affirmation of your character. That one’s self worth is a function of how others view you. Throw intersectional diversity in there, and the take-away message – among all the nodding heads – is that if a little black girl doesn’t see an heroic black woman on the movie screen, then she’s been cheated.

And we’re back to victimhood.

Alice Monroe in “Luther” on Netflix.

Yes, the Wicked Witch of the West is an excellent example of a liberated woman, more likely to make terrible life choices than not.

Two great antagonists were women. Margo Martindale as Mags Bennett on Justified and Ruth Wilson as Alice Morgan in Luther.