MSNBC’s Deutsch: Trump will “throw every toy out of the crib” to fire Mueller

MSNBC’s Deutsch: Trump will “throw every toy out of the crib” to fire Mueller 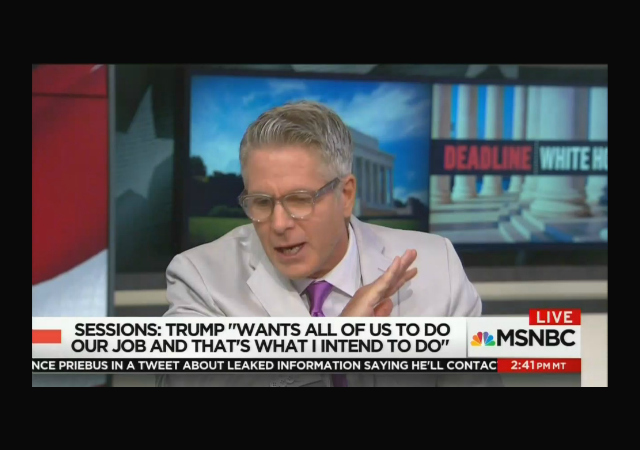 MSNBC’s kibitzer-in-chief, Donny Deutsch, has emphatically predicted that at some point, President Trump will fire special counsel Robert Mueller.  Deutsch said that Trump will “throw every toy out of the crib” to achieve his goal, “and that’s when impeachment proceedings start. That’s the way this ends.”

Appearing on Nicolle Wallace’s MSNBC show this afternoon, Deutsch claimed that Trump’s motivation in firing Mueller will be to prevent an investigation into his financial dealings, which would reveal him to be a “fraud . . . dishonest, and he could wind up going to jail.”

DONNY DEUTSCH: He will fire Mueller. Whatever the way he has to do it. It’s very simple. He cannot — and he’s even said it, as any authoritarian says it, he has said my red line is my financial dealings. Well of course that’s what this is all about. He cannot let the world see that. They will see that he’s a fraud, they will see he’s dishonest and he could end up going to jail!

The MSM abruptly lost their ability to read the future as soon as Trump stepped onto the stage. This is no different

Fraud about what? That he’s not rich, but actually broke? He doesn’t own all those golf courses and buildings? His Jet and Helicopter are actually illusions?
I don’t blame Trump for being angry. Meuller should be restricted to the election. Not every deal Trump ever made. This is truly a witch hunt.