Only five were from Texas 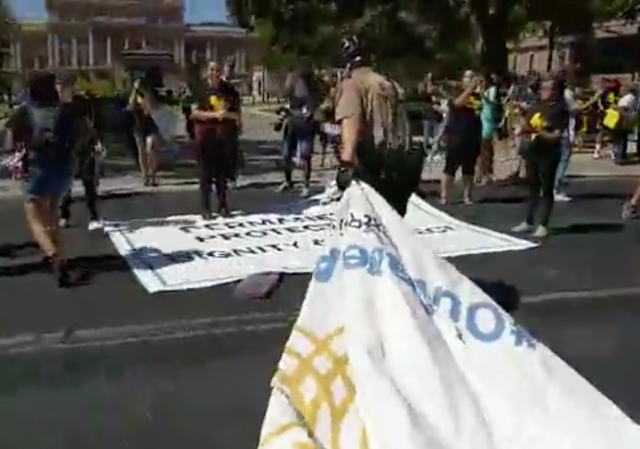 The protest was meant to target Texas Attorney General, Ken Paxton, who recently advocated for an end to the Deferred Action for Childhood Arrivals (DACA) program, but failed spectacularly.

Despite Cosecha’s presence in 20-some-odd states, only fifteen activists showed up to cause trouble, all of whom were arrested, only five of which were from the lone star state. Neither did the protest happen at the AG’s office.

The Texas Observer said a “crowd of dozens chanted “undocumented and unafraid” and “sí se puede” as the demonstrators were handcuffed and removed from a downtown Austin street on the north side of the Capitol,” but according to this video, I’m not seeing dozens, unless you count media:

Based on local reports, no sit-in transpired, rather, protesters blocked traffic, presumably to provoke arrest and draw attention to their cause (a favorite tactic of leftist groups).

Again, from the Texas Observer:

The 15 activists are charged with obstructing a highway, a Class B misdemeanor, and range in age from 20 to 42, police said.

“After repeated requests by DPS officials to leave the roadway were ignored, the suspects were arrested without incident,” said DPS staff sergeant Victor Taylor in a statement.

In a statement, Cosecha boasted of, “the first time undocumented youth participate in a civil disobedience action since Trump took office.” There were a whopping four DACA recipients arrested Wednesday:

The “safely released” is a nice touch, as though they’d be dangerous released? In any case, we have another astroturfed prog group who fell spactacularly short of their protest promises for the books.

Maybe targeting Texas on immigration issues (where most Texans are unified) is not the best place to start. Maybe.

>The “safely released” is a nice touch, as though they’d be dangerous released?

I assume the alternative to being ‘safely released’ is that they’d be held on ICE detainers and then deported, which is what should have happened.

Does Texas consider a person from California an illegal immigrant? If they don’t, they should.

It depends. The vast majority we consider to be economic refugees and are welcome here in the state as they bring businesses and capital (intellectual and financial) to the state. others are considered to be pests. Unfortunately we can not tell who is a pest until they manifest themselves at events like this protest. We should ship them back

According to NPR, and the amount is likely understated, “These annual “remittances” — as they’re called by analysts — topped $69 billion in 2016, according to central bank data compiled in a new report by the Inter-American Dialogue, a Washington, D.C.-based think-tank.”

Some sources claim as much as $130 billion. They should not be welcome because the costs of having them in America exceed any benefits.

Well, in Texas…even in Austin…the DPS WILL arrest you if you break the law.

We’ll see how this gets treated in court…

4 of the protestors were ILLEGALS. “Daca” deferment holders that were demanding their “rights”. Unfortunately the sanctuary city Sheriff (hispanic) would not hold them for ICE. They were charged with a class B misdemeanor which could result in a jail term of up to 6 months. So they are under indictment and should have been held. Unfortunately the “sanctuary cities” elimination bill does not go into effect until 9/1.

As times get more difficult for most Americans, especially those who are unable to find either any employment or decent full time employment (a.k.a., any job allowing 35 hours or more a week regardless of benefits or wage), I suspect public support and pity for illegal aliens who are here and working, DACA or otherwise, is going to be losing a great deal of support. It should be a no brainer that given the choice between employing an American citizen and employing an illegal alien that the American citizen should take precedence. For some reason, at the moment many cannot grasp this simple concept.

If they’re convicted of those misdemeanors, they’ll have a record and then ICE can pick them up.

Do they think that we’ll give them permanent status so they’ll stop blocking our streets?

Most time such charges get reduced, dropped or deferred. They were engaged in political protest, no shoplifting.

Interestingly, political protests can be conducted in conformity with the law.

Is this news to you?

That is generally the way local media couches their stories. They take ‘tight’ shots of 8 to 10 people and the reporter says hundreds are here.

The small size of the protest must indicate that DACA recipients are in favor of being expelled from the only country in which they were acculturated. That is the only conclusion one could reach from a particular demonstration not achieving a significant turnout.

Actually, I heard that they are busy lining up at the border to self-deport. It is a bit of a shame considering we could use law-abiding, educated, tax paying young people who have been raised as Americans.

Urm…the ones who are “law-abiding” wouldn’t have been there to break the law. Seems sort of a logical proposition.

The ones who are “tax-paying” are working, so…

You get the picture.

How about we make illegal entry a capital crime, execute a few who are repeat offenders, and then the rest will start heading back to Mexico.

The illegal alien in Oregon, or Washington, who was deported 20 times, then assaulted two women, that would be the perfect 1st example.

Really, we have to get tough, period. The cartels routinely torture and murder. We don’t want those people able to walk across our border.

The moms of anchor babies which inundate our hospitals and then our schools, they shouldn’t be able to walk across our border.

A moat with alligators, then a Wall, then machine guns. If we have something valuable, we should protect it.

Then, Brainstorming ONLY, we enter into a treaty with Mexico allowing us to set up a territory in Mexico with an American government, and see if we can get it established and the form able to spread in Mexico, like a plant spreads. This missionary work would be a great thing.

Not suggesting the American federal form, but a state form. The feds here are obviously incapable of doing the right thing.

When someone is deported more than once they should be lower priority for the deportation process. That means it would take years for the gov to deport them and they spend these years in prison.

If they were law abiding they wouldn’t be in the USA illegally would they?

notamemberofanyorganizedpolicital in reply to ConradCA. | July 28, 2017 at 2:48 pm