And not even in Austin 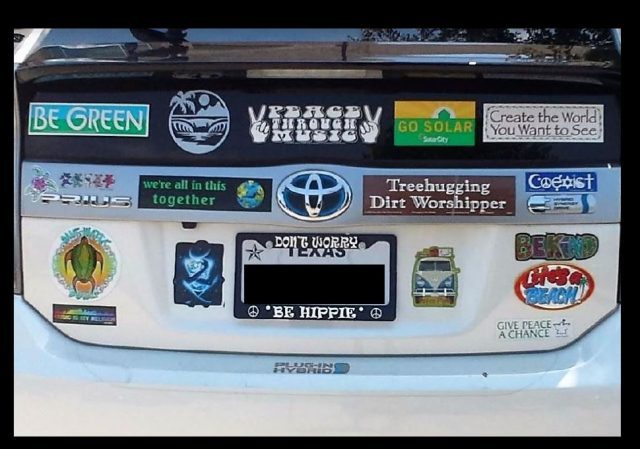 Believe it or not, this car was spotted in the LA Fitness parking lot in Keller, Texas.

This Prius driving “Treehugging Dirt Worshipper” with a “Don’t Worry, Be Hippie” license frame is a self parody on wheels. 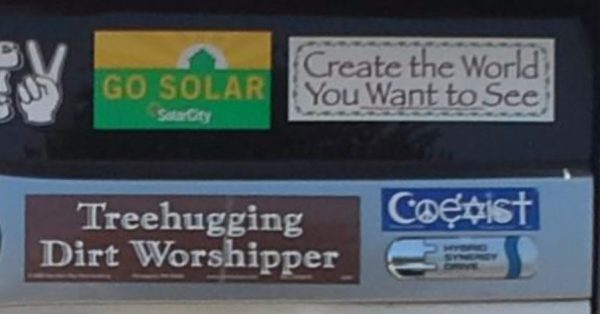 Texas is where California was 10-15 years ago. Libs have been messing with Texas and now control every major city. Border is still wide open with border ranchers fighting efforts to build the wall. Wake up Texas.

Here in CA and not long ago, you couldn’t get elected to statewide office without embracing low taxes, border control, DOMA, gun rights and the rest of the “conservative” agenda. Then the Texas Bush crowd took over and took over the CA Republican State Committee during the recall election of Gray Davis and crammed Arnold with his lib ideas down our throats. Then, after arguing that Republicans cannot win on their traditional “hate” issues, the issues that enabled to dominate CA forever, they adopted the national GOP agenda and stood for nothing.

The 2012 elections marked the first time since 1932 that the Republicans held no statewide office. And having agreed to jungle primaries, there is no hope of ever having another Republican governor or senator from CA.

So all your Texans (and elsewhere) who always blame CA for their demise, wake up. The Bush/Rove HQ is in Texas. You are doing this to yourselves. Most of the Californians by far moving out of CA are rejecting liberalism. Dems are also rejecting liberalism. That is why Trump is president. CA isn’t the problem. The GOPe HQ’d in TX that killed the GOP.

To be fair, these types have always been here. Seeing that a Prius isn’t exactly cheap, I have no doubt that this is some 60 something ex-Austin denizen who spent all of his formative years hanging out on Guadalupe, and is desperately trying to recapture some of his or her lost youth. (won’t work, btw) I’d lay even money that this person is, or was, a university professor or administrator, that’s where you can find most of them.

Weren’t some of them at the Alamo? – The ones running?

Also, with respect to “control every major city” – it’s not exactly what it sounds like. First, San Antonio and El Paso have always been Mescan, and always will be Mescan. (That’s Tex-Mex for those not familiar with the term) English has always been a second language in those 2 cities.

And Austin is Austin – even back to the cowboy days, it was always the center of all corruption and dirty dealing in the state, then it got taken over by the Hippie movement in the 60’s, and there it got stuck. Austin hates the rest of the state for not recognizing their Gaia-Given Greatness.

Houston and Dallas are easy to misunderstand – yes, those particular city governments are heavily Dem, but how it happened is that, in the post WW2 boom, there was a huge expansion of cheaply built subdivisions and strip malls that exploded the physical sizes of those cities. By the 80’s, all of that construction was getting dilapidated, run down, and downright slummy. Rather then rebuild it all, everyone with any money moved into a ring of new suburbs around them (Addison, Southlake, etc. in DFW, Katy, etc, in Houston) and left the old crumbling and rundown core cities to be taken over by the black and hispanic residents who were excited just to have anything. And yes, most of the jobs these cities provided moved out to the suburban ring with them.

So, today, these large Texas cities consist of a core of dilapidated neighborhoods which are heavily mexican and black, and thus 90% democrat, surrounded by a much more populous ring of suburbs which are very Republican and white.

I know it makes everyone feel creepy to talk about racial politics and self segregation, but it probably is the single most significant factor driving Texas politics today. Republicans have not chosen to make themselves racially segregated; but the Texas Democrats have very consciously and deliberately positioned themselves as the Black and Hispanic Party, and they have been successful.

I think upscale liberals from California are going to be quite surprised when they come here and try to get involved in Democrat politics and they find that, if they’re white, they’re just supposed to contribute money and they are never supposed to speak. (Unless it is to yell at other whites)

“Create the world you want to see”

I think that’s what Trump voters were doing last fall. 😉

It’s the pervailing westerly winds bringing in the CA liberals. Here in NH we call them “Blow-Ins”.

With NY being west of us most of the NY liberal Blow-Ins end up in VT but sometimes they are blown clear across that state and end up here in NH.

I have no use for ‘stinkin’ Hippies nor the younger ‘little stinkin’ Hippie wannabes. I do blame much that is wrong in the U. S. on that geriatric generation. Good riddance when they move on to that sloppin’ sty Woodstock in their afterlife where they can listen to their whiney, unfair songs for eternity. I believe Trump is pushing legislation to make National Punch a Hippie Day an everyday celebration throughout the whole year ????

It’s kinda’ funny when you think about it…
The Hippies hated “the establishment” because they didn’t want to be ruled by… “the man”.

And now, many years later, the hippy generation is “the establishment”…and they want to tell everyone how to live.

They’ve never become ‘men.’ Michelle Obama is about the most alpha-male as they’ve managed to get.

Well, MO does have good shoulders…..

I don’t have a problem with any of those. I don’t see any Clinton or Obama or Sanders stickers, and there’s nothing wrong at all with appreciation for nature, or being nice to everyone (something the commenter above seem typically oblivious too, much like the clueless liberals they claim to despise and yet tragically emulate in their vacuous hatred of any other narrow viewpoint than their own). Admit it: you don’t come here for reasoned debates or to be educated on the stories of the day; you come here to flaunt your imagined superiority.

“…and there’s nothing wrong at all with appreciation for nature, or being nice to everyone…”

If you believe the driver of that car is either, you have not been paying attention.

I didn’t realize you were still alive, Mrs. Kravitz.

nothing more need be said.

Keller you say…..THAT close to the Texas Motor Speedway!!!!!

Prius, solar power, go green…how many ways is this slug being subsidized by the tax payers? It’s wonderful to live at a discount, not paying full price for your lifestyle.