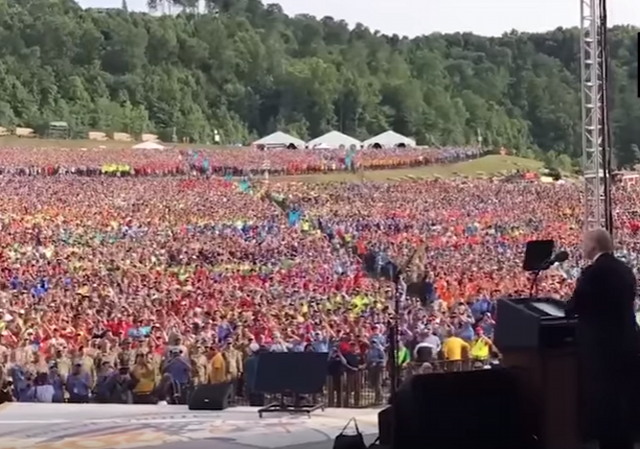 Trump visited the Boy Scout Jamboree this week, much to the delight of the approximately 40,000 attendees who cheered loudly for him.

Some liberals rushed to compare the Boy Scouts to the Hitler Youth, further displaying their utter disconnect with average Americans, or as they would say, the “deplorables.”

President Donald Trump brought his bombastic politics to a Boy Scouts event Monday in West Virginia, drawing cheers from the children gathered at the event and prompting comparisons between his rousing rhetoric and Nazi youth rallies from some liberal activists and journalists.

The president, the first sitting U.S. commander-in-chief to address the group since George W. Bush, used his speech to slam the “fake news,” demand loyalty from administration officials and advocate for the overhaul of federal health care. He spoke to about 40,000 people at the Boy Scouts of America 2017 National Scout Jamboree.

“As the scout law says, a scout is trustworthy, loyal,” Trump said, before adding, “We could use some more loyalty, I will tell you that.” As he spoke, the crowd chanted “U.S.A” and applauded, prompting some critics of the president, who has the lowest approval ratings in modern history, to compare his rhetoric to the Hitler Youth, a wing of Germany’s Nazi party.

Trump has officially succeeded in making the Boy Scouts feel a bit like the Hitler Youth, which was made mandatory by the Nazis in 1936. https://t.co/9HhnQpzkA2

I feel like I’ve seen what is happening at the #BoyscoutJamboree before… pic.twitter.com/BfdnB5XaQM

I really hate invoking Hitler because it is sensational 99% of the time but god damn does he make this look like a Hitler Youth rally. https://t.co/AmQMoZ8Woq

This video shows the reaction of the crowd at Trump’s arrival:

This video shows a few highlights from Trump’s speech:

Please @POTUS don’t put the Boy Scouts in this situation. Keep politics out of the Jamboree. What a mess. Totally unfair to these kids https://t.co/lW7rwtF612

This is the best response:

MSM spends 15 politicizing Boy Scouts with gay agenda, and now that someone else is honoring their precedent, they freak out.

On Monday night, President Donald Trump jetted to West Virginia to address the annual Boy Scout Jamboree. And oh what a speech it was!

Trump ranged from the current health care bill to stories of a bygone time in New York history to his Electoral College victory in 2016. It was a Trumpian tour de force — one sure to cheer his supporters but leave the rest of the country wondering what, exactly, he is doing and thinking.

The plan seemed mutually beneficial: President Trump would bask in an adulatory slice of Americana, and the Boy Scouts of America would host yet another sitting president at its national jamboree.

But Mr. Trump’s decision to mix a barrage of political remarks into a speech that has traditionally been an uncontroversial stream of upbeat oratory has enraged many parents and former Scouts, thrust the Scouts once again into the middle of the nation’s culture wars and provided yet another example of the unusual and polarizing nature of the Trump presidency.

Democrats have been struggling to find a new message for their party. Perhaps they should go with something their supporters will truly appreciate. How about this?

“The president, the first sitting U.S. commander-in-chief to address the group since George W. Bush….”

Translation: Obama slighted them on their 100th anniversary in favor of The View, and got booed when his message was shown.

Yep. But they have to make it sound like Trump’s the one who’s out of line.

I guess the concessions on gay scouts and gay scoutmasters didn’t get them a free pass after all. Who could have predicted such a thing?

Just brilliant these miserable liberals have become. As a father of a son who is a Boy Scout and is working to be an Eagle Scout, calling him and his fellow scouts “NAZI’s” won’t endear many of them to the democrat party. Also, do the “NAZI” scouts include the gay and transgender scouts as well?

It was Trump’s speech, not the Boy Scouts, that was criticized. But believe what you want.

The tweet with the photo of the Hitlerjugend belies that claim. The correspondence of Scouts to HJ very plainly compares the Boy Scouts to the Hitlerjugend, not Trump to Hitler. The tweet even mentions the Jamboree, not the president.

So the opposition to Trump gets tarred because of 1 tweet. The others, as I already pointed out, refer to Trump usurping the jamboree for his own personal aggrandizement. His speech was all about him. Please deny that.

As to why democrats are losing elections: It is cyclical. As recently as 2008, Obama and the democrats swept the field and republicans were doing the postmortems. If Trump, McConnell & Ryan continue as they are, it won’t be for long. Of course, suppressing votes in the name of fighting voter fraud and extreme gerrymandering may prolong the situation a bit longer. But the next cycle is inevitable.

Election security is not voter suppression. If you can’t prove you have the right to vote you shouldn’t be voting. Period.

Voter suppression is voter fraud. If you use intimidation, lies, unreasonable requirements, time consuming and costly methods to deny citizens their legal right to vote, it is fraud. Maybe you want to bring back the ‘literacy test’ and the poll tax. Maybe you want to restore the use of white bigots as registrars.

If there is so much fraud, how come there are so few prosecutions? It is already against the law! Kobach has secured a total of NINE convictions for double voting over his entire tenure — most of them older Republican men.

If this commission made even the pretext of looking at voter fraud AND voter suppression, it might pass the laugh test. But somehow the suppression part isn’t being investigated even though there is a lot more evidence of the latter.

In 2000 Florida used a republican consulting firm that knocked off the rolls anyone whose name was similar to a felon. They concentrated on counties that were mostly democratic and/or had a high percentage of non-whites. Most of the people were legal voters. Ditto for ‘True the Vote’ in 2008.

You are just afraid that if too many of the wrong types vote, you will lose. You can’t pretty this pig up. Period.

I hate the over-used term “jumping the shark” but on just about every issue, the Democrats have jumped the shark. And the cure is always to acknowledge that maybe they made a mistake so they then jump a bigger shark.

Monday, they finally acknowledged that they didn’t lose in 2016 because of Russia but because they weren’t connected to their base. So from now on, they will be the new Democratic Party offering the same cancer package (only bigger) but with less Russia.

It never ends. And the GOP is just as bad. Just listen to McCain yesterday telling everyone to turn off the blogs and radio and stop listening to the only sources of voter “connectedness”. We must be winning or something.

“Com’n, everyone, join Melania and me in singing one of my all time favorites, the Horst Wessel Song.”

The left is just so sickening.

My son is there (proud mama hat on- he worked hard for that!). He called me Monday night (only the third time in the past 10 days) and told me how cool it was, and how he loved listening to President Trump. He told me I HAD to go watch/listen to the speech because it was so awesome.

Honestly, I do not know if my son was listening, or just basking in “the President of the United States came to see me and my friends.” Either way, this was an experience for him to remember always.

My son is there too, and I’m sure he was thrilled to see the President. He has not called at all, however, so I’ll have to get his take when he comes home on Friday. (No news is good news when it comes to Scouting trips, right?)
Oh, and that crowd is sooooo brown with brownshirts. Yeah, just like Nuremberg. /Sarc
I have read some of the comments regarding the speech on the Jamboree Facebook page, and plenty of the negative ones come from people who can be readily identified as unlikely to support Scouting or the president anyway. And if you start your comment with “If I had a son in Scouting…” you’ve pretty much undermined your relevance to the issue at hand.

“No news is good news when it comes to Scouting trips, right?” spoken for truth!!!

The left is making themselves a lot of enemies with nonsense like this. Do any of them know the “rule of holes?”

Because their mental functioning isn’t that good, perhaps they are conflating The Rule of Holes with The Reagan Christmas Joke, so it ends up: We have to keep digging because there is a pony down here somewhere.

Liberals must not know any real boy scouts to think they might be a Hitler Youth. Every thing they believe is contrary and opposed to Adolphs’ youth group. And by the way Boy Scouts are courteous and kind to their elders.

One has to be completely ignorant of history/reality (Ms Mendes, you know who you are) to make any comparison between the BSA and Hitler Youth. It’s easy to spout such nonsense, but please, show some actual examples of how the two groups are alike. And while you’re at it, show some examples of how President Trump is anything like Adolph Hitler.

In a speech to the Boy Scouts, why did Trump who was never a Boy Scout, need to make the speech about him, Hillary Clinton and Obama? Because everything is about Trump.

The analogy to Hitler Youth is over the top. But so is Trump.

Hitler, for one, had the media on his side!

Do these fools have any idea just how many former Scouts are out here? It doesn’t go away… the above is from 60 years ago.

Great and inspiring speech. Listen to the entire speech!