It’s not true that you always remember your first

It’s not true that you always remember your first

I was 15, but I really don’t remember it even though someone just texted me a photo 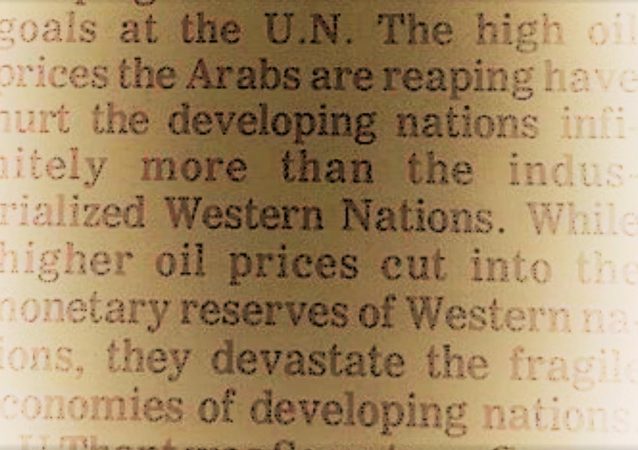 A relative was going through some old family files today, and found a clipping of a letter to the editor in the local newspaper that appeared on December 12, 1974. He texted me a photo of it.

The title was “Irony at UN?”

The letter probably is the first piece I ever published.

But I don’t remember it.

It’s kind of spooky for me to read it. It could have been written yesterday.

When I was 11, I won an American flag from the San Antonio Bar Association for an essay on the meaning of the flag.

I have a picture somewhere of me in my Scout uniform where it’s hard to tell the flag pole I’m holding from the bean pole holding it.

Pic, or it didn’t happen, Rages! Good for you! Good for the professor!

Okay, Professor, the important question is: were any of the young chicks you knew at the time impressed by your newfound letter-to-the-editor intellectual cred?

Professor Jacobson has accomplished quite a lot for a man only 38 years of age!

Yes, of course, 1974. The worst typos usually are in the first sentence.

I think…when I was 15, I wrote a letter for a contest our local gas company was running. I took the anti-nuke stance intentionall, because… well, I was an idiot at the time, and Three Mile Island had happened recently. But anyway, my theory was that it did not matter how small the chance of major meltdown was, *any* chance would turn into a certainty once you built enough plants.

It got me a free trip to Energy Camp in Colorado, which was amazingly cool/frightening/odd for this clinically introverted kid. I would like to say that put me into a career of writing, but in fact, I wrote nothing else that anybody (other than a teacher) read until about five years ago when I started writing (hushed voice) fanfiction. Probably as high up the writing ladder as I’ll ever get, unless I publish a swords and sorcery novel (which I’ve been working on for twenty).

When I was that age we had to write our letters to the editors on clay tablets.

We didn’t send many because postage was a killer.

Tom , you are like me ,Im so old I can remember when the Dead Sea was Alive.

15…. ???? I was working on my driving permit, nothing as exciting as being published!

I wrote a letter to the editor of our dinky little weekly newspaper when I was a high school junior in 1979.

Our state representative was a liberal Democrat. The paper gave him a regular column that ran twice a month. He used the space to promote Jimmy Carter, welfare, and other big government Democrat programs. His rhetoric was not anti-Republican. But he never mentioned what Republicans were offering. He was a Democrat so he was using the space to push Democrat ideas or talk about how successful Democrat programs were.

I wrote a letter saying I thought it was unfair that Republicans were not given the same amount of space to promote their ideas, too.

My letter was published and the editor wrote a note at the end of it inviting me (or anyone) to write essays either critiquing the Democrat or promoting our own ideas. I declined. As a high school student I did not feel qualified to opine on public policy. But it irked me that we were only getting one side.

I guess that was when I first noticed media bias. Some things never change.

The mind is a strange thing.

When I was 15 I played on my high school baseball team. I was the only freshman and so sat on the bench/kept score. That is all I remembered doing. Years after high school I walked into a bar in my home town and a guy at the bar said “hey, it’s the home run man”. I recognized the guy as the coach of the HS baseball team.

He started telling everyone about how I went to the plate and belted a home run. I was thinking… that’s a nice story but he has me confused with some other student. I never got an at-bat and certainly didn’t hit a homerun.

Once I got home and thought about it a bit… was he actually correct? Did what he describe actually happen or was I inventing it in my imagination? I went back a week later and the coach was there so I asked him a question that would confirm my suspicions.

To my surprise, I wasn’t inventing it, it was an actual memory. My one at bat in high school baseball I had hit a homerun.

For years after, when I would think about it, it wasn’t in remembering that I had hit the homerun, it was in astonishment at not only forgetting that I had done it, but going so far as to thinking the coach was wrong for saying that I was the one who did it (it wasn’t me, I’d remember doing that… no in fact you did it, but just forgot).

Most impressive, Professor — your intellect, moral fortitude and eloquence seemed to be rather well-formed by this tender age — I tip my cap to you. This was a Letter to the Editor that any adult would rightly be proud of. I’ll readily confess that it took me somewhat longer to develop these traits.

And, of course, you’re right regarding the thrust of your letter — it’s quite distressing to see that not much has changed with respect to U.N. member states’ attitudes towards Israel and the Arab bloc in the forty-three years since your letter, despite the scourge of Islamic terror having metastasized and wounded a broader swath of nation-victims outside the Middle East — which reality one might expect would help to bring some moral clarity to nations’ appraisal of Israel and Islamic states, respectively.

I had a few letters published at around that age. One criticised Jimmy Carter for abandoning the Taiwan treaty, and asked what this said about the USA’s commitment to its other alliances. And one supported the Solidarity movement in Poland, for which I got a long letter from a Holocaust survivor, berating me as as Jew for standing up for the Poles, and maintaining that they deserved to suffer under communism for the way they had treated the Jews before, during, and after WW2.

My first letter to the editor appeared on my 21st birthday. I was criticizing a columnist for using bigoted imagery and jokes while discussing the Boston Mafia.

I later figured out/learned he was de facto press agent of Whitey and Billy Bulger.

“Cancer of the conscience”.
Brilliant phrase
wow how many different applications could we use with it today?

Geez professor – I wouldn’t have been able to write that letter at 35! I was 18 in ’74 and still working out Classical Gas and Light My Fire (Feliciano version) and lying to my parents about why I smelled like cigarette smoke. “My friends smoke, not me”.

Well done on that! MrE.

When I was 15, I was busy working on the first of what would become two autobiographies: “Teams from My Father” (he managed three of the Little League teams I played on), followed by “The, Uh, Paucity of Dope” (about how hard it was, at the time, for elementary school potheads to get marijuana [not to imply that I was one myself; but I lived through that]).

Wow, what an eloquent letter! I don’t think I could have strung sentences like that together at that age – or even today!

I’m a similar age to you, and at that age I was just boiling with frustration at the hypocrisy of the UN (nothing has changed in 50 years!) but it never occurred to me to write a letter to the editor.

In 1961 I spotted a math error in a Time magazine article, and I wrote to Time pointing out their error. I then told my high-school chemistry teacher about it, and he complained that I should have told him so that the letter could have come from the entire class. (Yeah, right.)
I got a letter back from Time telling me that I was one of about 30 readers who spotted the error.

Cool! When cleaning out my recently departed dad’s farm where we grew up I found my NRA Sharpshooter’s certificate from when I was 12. The world was different then. Oh, I was actually paid (not much) as a sportswriter for the local paper when I was in high school.