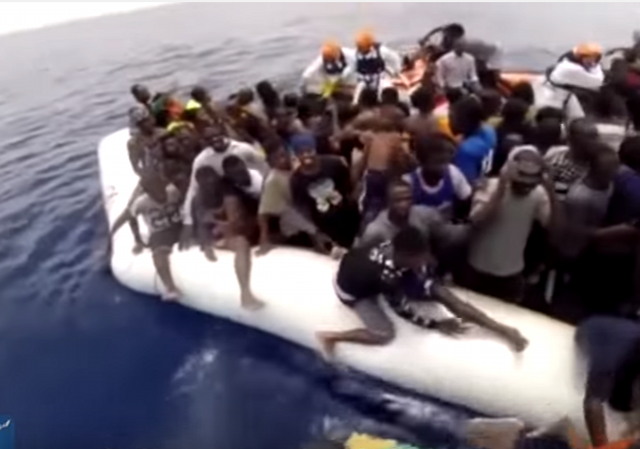 Italy is being overwhelmed by migrants from northern Africa due to its geographic location.

As we previously reported, the situation has become so bad that Italy has threatened to close its ports.

In order to get the rest of the EU to help, Italy is now threatening to just give these migrants, mostly from Libya, visas which would allow them to live anywhere in Europe. This is threat to flood the rest of Europe with hundreds of thousands of Libyan migrants is being termed the “nuclear option.”

Prime Minister Paolo Gentiloni is furious that European neighbours have reneged on their commitment to take in a quota of migrants fleeing war-torn countries in North Africa.

The Italians are not plotting to use a little known Brussel’s directive, drafted after the Balkans conflict, which gives displaced people temporary entry to Europe, reports The Times.

And Gentiloni is threatening to use the loophole to allow 200,000 migrants to leave Italy as the country struggles to cope with its high numbers of refugees particularly from Libya.

Both deputy foreign minister Mario Giro and Luigi Manconi, a senator with the ruling Democratic Party, confirmed to The Times that the controversial move was being considered.

Mattia Toaldo, a senior analyst at the European Council on Foreign Relations, branded the idea a “nuclear option.”

He said: “If migrants continue to arrive and Italy decides to give them papers to cross borders and leave Italy it would be a nuclear option.

“Italians have lost any hope of getting help from the EU and may say, ‘If you won’t make it a common challenge, we will.”

Italian villages on the coast are so flooded with migrants that the facilities used to house them are being described as human warehouses.

The Local IT reports:

They used to be sleepy hamlets on Italy’s sun-baked Padan Plain. But two years with hundreds of asylum seekers packed into overcrowded centres dubbed “human warehouse” are taking their toll — on both migrants and villagers.

Inside vast white tents erected in a former military zone on the outskirts of the tiny village of Conetta, some 1,400 men from across Africa while away their days, packed onto endless rows of bunks as the temperatures rise.

Many escape for a few hours to cycle around the area: they are met with hostile banners calling for them to leave.

“I used to call this place a modern lager,” Cona mayor Albero Panfilio told AFP, referring to concentration camps. The commune of Cona includes the little village of Conetta.

“After two years this is (still) a place where human beings are squashed in together, with no hope for the future. Now I call it a human warehouse. The migrants arrive, they don’t know where to put them, they have a warehouse, they dump them here.”

One has to wonder of this would be happening if EU headquarters were located on the Italian coast.

“One has to wonder of this would be happening if EU headquarters were located on the Italian coast.”

Well… given the demographics of Brussels… I imagine it would.

(Brussels is about 30% Belgian, 32% other European, and 36% Moroccan, Turkish and Sub-Saharan African (mostly from former French colonies).)

Italy can close its ports AND remove its ships from the Med. Begin returning recent “migrants” to North Africa. Fail to do so and Italy will be over run and die away as a modern European nation.

I-Slamic invasion by the Caliphate –
couldn’t happen to a ‘nicer’ group.
If this happens, we will need to extreme vet EuroTrash.

There was a country called Italy once. It’s now part of the African colony of Europe.

Don’t send them to “Europe” in general, send them – goats and all – to Germany let Frau Merkel (insert horses aggressively whinnying here) serve them Ovaltine.

Much as I regret it, Italy must do this. This will be the only way to wake up the rest of the continent with their cheap talk.

These Muslim invaders should be returned to North Africa instead of being allowed to destroy Europe.

Sure, but Italy’s point is, it cannot do it alone. It needs assistance, and the rest of Europe is simply glancing away instead of adopting a policy to return them, or sending aid.

That’s my only point. Italy is at its breaking point and Europe is SUPPOSED to be helping. EU and all that.

…Italy is now threatening to just give these migrants, mostly from Libya, visas which would allow them to live anywhere in Europe.

Wait. Visas? I thought the EU was a ‘open borders’ utopia!

Send them to Hawaii. Obama can entertain them at his beachfront haunts.

Unfettered illegal immigration to any country is dangerous. The US struggles with a similar issue from it’s Southern Border.

Unfortunately, what I see is that European countries impacted by the mass immigration are going to have to ban together to stop the violence in Africa and the middle east so there’s no longer a need for people to leave these war torn areas…..

They have more reasons to invade Europe than avoiding war. They will live a life of luxury and ease in Europe with welfare. They have crushing poverty, disease and starvation in their homeland.

The Roman Empire was destroyed when they let hordes of barbarians in. These Muslim invaders are barbarians and they will destroy Europe.

Indeed – we are witnesses to a tragic history that is unfolding in slow-motion. The disastrous consequences are as immutable as they are entirely predictable.

It’s almost too late. Feed them to the sharks.

Turn them all away, allowing evolution to take its natural course.

If life for religious minorities becomes too difficult in Italy, perhaps the Vatican will decamp for Avignon?

Sure, it’s been a few centuries, but sometimes what is old becomes new again.

Italy should do what it has to do, this is ultimately a hostile invasion and requires self-defense:
‘Millions of Africans’ will flood Europe unless it acts now, warns European chief.

A great many millions over time.

The dysfunction of the EU has been on display for decades, but, following the Greek fiscal implosion, these recent immigration fiascos are truly crystallizing why the union is fundamentally unworkable.

It is a tragicomic farce, watching these first-world, developed economies, boasting supposedly enlightened leaders and first-rate military forces, being brought to their knees — not by a Russian invasion or similar such open conflict — but, simply by an emasculated, naive, feckless and myopic approach with respect to how to deal with the ragged Muslim hordes and a pointed unwillingness to protect secular democracy, freedoms, and, one’s citizens and borders.