A union has proposed even more taxes for Chicago. 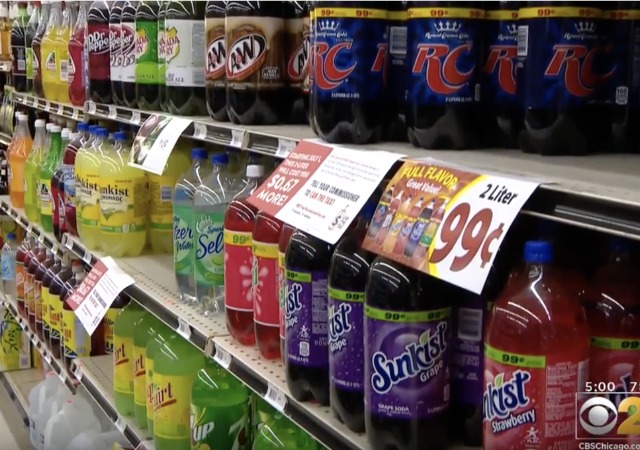 Cook County Circuit Judge Daniel Kubasiak dismissed a challenge to the county’s beverage tax as unconstitutional, which means the tax will go into effect on Wednesday. From The Chicago Tribune:

In the immediate aftermath of Friday’s ruling, retailers and beverage industry groups lamented the setback, while health groups and county officials cheered. Cook County Circuit Judge Daniel Kubasiak also dissolved the temporary restraining order that had halted implementation of the tax, which originally had been set to take effect July 1 and applies to both sugar- and artificially sweetened drinks.

The tax is scheduled to go into effect Wednesday, according to Cook County Board President Toni Preckwinkle.

“We applaud today’s decision. … We believed all along that our ordinance was carefully drafted and met pertinent constitutional tests,” Preckwinkle said in a emailed statement after the ruling.

Kubasiak did not find that the tax violated the state’s constitution:

Reading a portion of his ruling, Kubasiak acknowledged he was aware of the county’s “budgetary turmoil” as a result of the legal challenge, but said he wasn’t “moved by its public airing of those matters.” Ultimately, the judge determined that the tax was within the county’s authority and did not violate the state constitution.

“The court is not charged with evaluating the progressive or regressive nature of this tax, or any tax. … Rather those determinations rest with economists, the county’s elected officials and those who ultimately bear the effect of the tax,” Kubasiak said.

The Illinois Retail Merchants Association will now look into its legal options. President and CEO of the group Rob Karr knows he can either file an appeal or amended complaint. From ABC 7:

After court Friday the Illinois Retail Merchants Association said it was disappointed with the ruling and hoped to make a decision soon about how they might proceed with an appeal, if they do. They said they are worried for their members and for consumers.

“Consumers in this county should be very concerned… about how much higher their grocery bill is going to be,” said Tanya Triche-Dawood, an attorney for the Illinois Retail Merchants Association. “And the county should be concerned about the number of people who will leave the county in order to find lower prices elsewhere.”

Retailers have opposed this bill, according to The Chicago Tribune:

Many retailers oppose the tax, which would apply to a wide variety of sugar- and artificially sweetened beverages. They’ve argued that, under the Illinois Constitution, similar objects should be taxed uniformly. Under the sweetened beverage tax, drinks in a bottle, or from a fountain machine, are taxable. But on-demand, custom-sweetened beverages, such as those mixed by a server or barista, or a hand-made Frappuccino, aren’t subject to the tax.

Also exempt: purchases made with federal food stamp benefits through the Supplemental Nutrition Assistance Program, which are exempt from state and local sales taxes under federal law.

More generally, many retailers have fought the tax because it required them to make changes to their point-of-sale systems — a potentially costly undertaking for small stores — and adapt to numerous changes to regulations in recent months.

Cook County Commissioner Richard Boykin called the day “a bad day for the taxpayers of Cook County.” He also accused Preckwinkle of bullying “the judge into this decision.

Yes, believe it or not, the American Federation of State, County and Municipal Employees (AFSCME) have started to pressure Cook County officials to raise taxes on alcohol, parking, sale, and cigarettes. From Illinois Policy:

AFSCME’s suggested 25 percent is particularly tone deaf. In 2016, Cook County raised its portion of the sales tax 1 percent in order to fill a budget shortfall giving Chicago the highest combined sales tax in the nation at 10.25 percent. The sales tax pushes even higher to 11.5 percent when accounting for food or beverages purchased in the Loop thanks to a Metropolitan Pier and Exposition Authority tax and the restaurant tax.

In addition to pushing for a sales tax hike, AFSCME is recommending increases in the alcoholic beverage tax and cigarette and tobacco tax. These two taxes are already among the highest in the region and even the country. The existing effective rate on alcohol in Chicago is currently 28 percent before the proposed doubling of the Cook County rate. Similarly, the existing cigarette and tobacco tax puts Chicago at the top of the list at per pack cost at $6.16 per pack. AFSCME is recommending an additional $1 per pack on top of that.

AFSCME and the Chicago Teachers Union even suggest the county “implement a ‘head tax’ on employers with 50 or more employees.” These companies would have to pay $11 every month per employee.

Illinois policy notes that even “Mayor Rahm Emanuel has fought this tax noting that it’s a job killer.”

I am in favor of the taxes that hit those who don’t otherwise pay taxes and generally drain the rest of us of our tax dollars.

I agree. It’s morally wrong to let a sucker keep his money. Poor financial decisions are responsible for much of the have / have not situation we have.

Except those on food stamps are unaffected by this tax….

Gee, sure miss Illinois. Not.

Please stop running these articles, I Don’t want Andrew Cuomo getting any new ideas to take our money!

“The county expects this extra penny an ounce will bring in $67.5 million for the rest of the year and $200.6 million in 2018.”. Until the Philly solution takes hold….

I’d be interested if Philadelphia’s soda tax revenues start to decrease as consumers find ways around the taxes.

End of June was in Ocean city New Jersey on vacation – the store I was at had signs on their soda aisle saying ‘stock up here to avoid phillidelphia soda tax!”

That is why it is a County tax and not just the City of Chicago.Chicago has the population to vote that the rest of the county picks up more of their expenses, and when the County runs out of money to cover Chicago’s expenses, just raise taxes on the County and make the suburbs “share” Chicago’s expenses.
It is more effort (time and cost) to evade county punitive taxes than city punitive taxes.

“.. purchases made with federal food stamp benefits through the Supplemental Nutrition Assistance Program…”.

Two takes on this:
(1) SNAP recipients are allowed to eat and drink unhealthy foods with our money and we pay their health care costs (double whammy)
(2) a corrupt and scandal filled SNAP program will invite huge increases in the illegal sale of SNAP benefits.

Perfect – just what Illinois based Obama would want.

Is this only for today’s popular brands or does it also apply to old “curios and relics” like Moxie?

To Big Soda draw the line. NO MORE SODAS in Chicago until tax is repealed.

I imagine the next step will be tax stamps on drink containers. Get caught at, say, a picnic in the park with a container without a tax stamp, go to jail. The state county will not be denied!

I goofed the HTML code. That will teach me to get fancy with a phone.

I encourage Cook County and any other Democrat run location that is technically inside the United States, but is not really part of America to raise any local taxes they can. I also encourage America to leave them to wither on the vine.

But aren’t sugar drink taxes meant to make our kids healthy? This just couldn’t be about the money….