Facts. How do they work?

Last week, a female reporter was kicked out of the Speaker’s Lobby for donning sleeveless attire. The incident reignited a debate on the long-standing Congressional dress code.

The whole tired trope was thoroughly debunked via use of Google and the accounts of those with Hill experience. Both of which conclude the following in the most basic of terms: Congress has a dress code. Congress has always had a dress code. Dress code violators have been removed repeatedly. These are facts.

But banning sleeveless attire is clearly sexist! No. It is not. It’s a professional expectation. Try wearing open-toed shoes and sleeveless shirts in the courtroom of a strict judge and let me know how that works out.

Just for fun though, supposing it were possible for the Congressional dress code to be sexist, it’s men, not women, who get screwed. Women have the option of wearing skirts and dresses to keep cool in the sweltering summer heat, men have no such luxury and no escape from suits and ties.

In any case, The Guardian…in what I can only assume is a pathetic attempt to troll the non-debate, Hadley Freeman has the hottest of the hot takes: 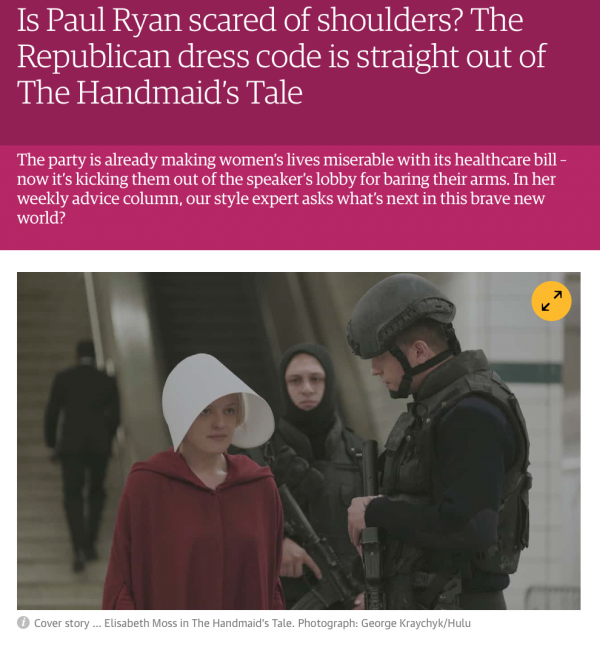 That’s what? At least three inaccuracies in the headline alone? We’re off to a great start here.

Freeman uses the debunked story not to discuss the merits of dress codes, their practicality, or whether they’re disproportionately enforced, but instead goes on one helluva disjointed diatribe using ever manner of boilerplate anti-Republican platitude known to internetkind, none of which are remotely relevant or coherent to whatever argument she thinks she’s making about sexist dress codes.

A sampling (I apologize in advance for what you’re about to read):

So, even though walking-Viagra-pill Trump, woman-shunning Mike Pence and shoulder-phobic Ryan often act like raging misogynists, clearly the problem is they just love women too much. They can’t trust themselves around them – that’s how much they love women. In fact, I don’t think this rule goes far enough: Ryan should ban women from being seen in public full stop, and all menstruating women should be sent to caves, those bleeding, irresistible temptresses, until they are clean again for their husband’s consumption. Clearly this is the only way Ryan and his fellow walking boners can cope, given they only need to see a clavicle to start rubbing their thighs. Hell, ban women, full stop! Only then will the United States be safe.

And how does any of this relate to The Handmaid’s Tale? Freeman neglects to explain that bit, but the cautionary tale had to make an appearance since it’s all the rage to claim everything holding women to an adult-like standard is theocratic misogyny, out to force women into the great, vapid nothingness of procreation (despite the fabulously self-unaware irony that women, void of any other purpose in life not related to ‘reproductive freedom’ (read:abortion) is exactly what neo-feminists expect other educated women to become when it’s time to vote).

you are so naughty – how can you keep your victimhood kard when you point this absurdity out ? 😉

What would be really offensive is if those evil Republicans started making women cover their faces so that only their eyse would show with some piece of clothing, lets call it a “burqa”.

Surely the left would wholeheartedly condemn any group that tried to do something as sexist as that, wouldn’t they?

I don’t think that the DummyCraps would CAIR –
we should ask Huma or pantsuit.

Guardian News and Media Ltd. is based in London, where the writing is on the wall … and that writing is in Arabic abjad.

In a short time—at least as history is measured—their dress code worries will be over. For women, at least.

Women used to be the brakes on society. Now we are full pedal to the metal. I apologize for my stupid sisters.

Reading the comments it doesn’t take much to see how you ended up with the Bernie Sanders supporter shooting of republicans. There is a very real sense of dehuminasation from the left of Republicans.

It’s not limited to Republicans. The left’s indulgence in [class] diversity denigrates individual dignity. Setting men and women at each other’s throats guarantees Dodo Dynasties. The resumption of abortion rites (and clinical cannibalism) debases human life. They will not be… They are not safe from the consequences of their choices.

Ryan is a rino doormat, as useless and as big a backstabber as boehner and mcconnell.

Defending him is a waste of energy. It’d be great to see him gone – but if his replacement is worthy of it, defend the replacement.

McConnell somehow, miraculously, held the line on Garland and actually held all the squishiest rinos to get Gorsuch confirmed by ending the filibuster.

That alone makes him one of the best Senate Majority Leaders we’ve had in my lifetime.

You mean, he showed up for work twice?

Your standards are low.

“The Guardian” has never in living memory been impeded by facts.

“Printing All The Collectivist Narratives That Will Fit.”

How can anything be ‘sexist’ when gender is just a state of mind?

There is not much one can do to help a woman too stupid to understand the value of a business suit.