The terrorist is a refugee and, according to local police, a “known Islamist” 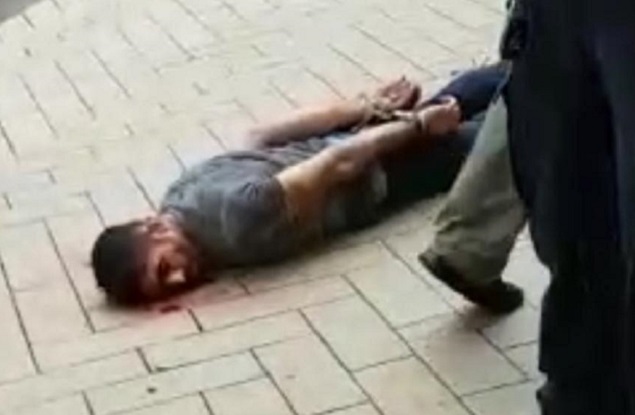 A 26-year-old “Palestinian” refugee entered a supermarket in Hamburg, Germany and stabbed one man to death while shouting “Allahu Akbar.”  As he attempted to flee the scene, he stabbed several other persons.  The exact number is not yet clear and reports range from three to six people wounded.

A knife-wielding man reportedly screamed “Allahu Akbar” during a wild attack inside a Hamburg supermarket that killed at least one person and left four others bloodied and wounded on Friday.

German police arrested the suspected attacker in the Barmbek district after witnesses followed the man and alerted authorities. The suspect was overwhelmed by passers-by and slightly injured in the process, police said.

The assailant entered the supermarket and stabbed one person, who died at the scene, before fleeing the scene. While on the run, the suspect stabbed and injured four other people.

The terrorist was reportedly known to police before this attack, but he was not considered dangerous.

The attacker who killed one man and injured six others in a stabbing rampage in Hamburg is a “known Islamist”, police say.

Investigators told a press conference the 26-year-old man, named locally as Ahmad A, was known to security services but also appears to have psychological problems.

He said the unnamed attacker was known to have been radicalised but had not been considered dangerous and his motive remained unclear.

Torsten Voss, head of the Hamburg branch of the domestic intelligence agency, said officials interviewed the man and came away with the impression that he was a “destabilised personality” but not someone who posed an immediate threat.

“We evaluated him rather as someone who was psychologically unstable than had clear Islamic extremist motivations,” he added.

The Washington Free Beacon has further details about other recent terrorist attacks in Germany:

If the attacker was motivated by Islamist ideology, then this would follow a series of recent terror attacks in Germany. In December a Tunisian asylum-seeker drove a truck into a Berlin Christmas market, killing 12 and injuring 56, which motivated Germany lawmakers to tighten procedures on admitting refugees.

Earlier this month and despite a marked increase in crime, German Chancellor Angela Merkel again refused to consider capping the number of refugees she’s permitted to flood Germany.

The suspect was overwhelmed by passers-by and slightly injured in the process, police said.

Slightly injured in the process? Not the optimal outcome.

notamemberofanyorganizedpolicital in reply to rinardman. | July 29, 2017 at 12:42 pm

Obama is the establish man all about the “process.”

The police wanted him alive so they could find out what motivated him. (eyeroll)

He was an Islamist, known to be radicalized, had a “destabilized personality”, and was known to the German police … but was not considered dangerous.

[sarcasm]
No doubt about it. Angela Merkel’s policies are definitely allowing average German citizens to be secure in their persons, with no need at all to fear Islamic Supremacists!
No. Need. At. All.
[/sarcasm]

notamemberofanyorganizedpolicital in reply to Walker Evans. | July 29, 2017 at 12:43 pm

Angela Merkel is doing everything she can to get more dates on Saturday night.

Friggin’ Eskimos! I swear, it’s always something with those people. Go back to the North Pole where you belong! We don’t cotton to your kind around here!

Blame this on Mutti Merkel

–>capping the number of refugees she’s permitted to flood Germany.<–

how long does Eurabia have before Sharia is law of the Continent ??ask the Serbs when they plan on taking over —
the LibRules will just 'love' the dancing Boys in girl Dresses –
Do you think that this will be a 'drag' on their economy ?

we can also ask Obamabots in the USA/MB/Huma/CAIR/DonkeyParty when they expect this 'Forward Marchof Inevitability' to occur.

The German police’s defense of Merkel’s limitless migration policy is that this murderer was crazy and not an Islamic terrorist. When you let millions of unveted people into your country there will be violent, crazy people, and there will be more crimes.