But threats from ISIS still loom nearby… 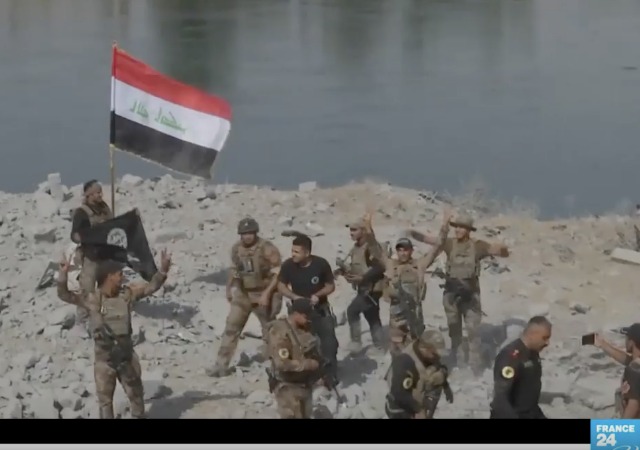 After three long years, forces have liberated Mosul, Iraq’s second largest city, from the grips of ISIS. From CNN:

“From here, from the heart of the liberated and free Mosul, by the sacrifices of the Iraqis from all the provinces, we declare the great victory for all of Iraq and Iraqis,” [Iraqi PM Haider] al-Abadi said. “This is a great celebration that crowned the victories of the fighters and the Iraqis over the last three years.”

The Iraqi forces, with help from a U.S.-led coalition, ended the occupation in Badush, located 10 moles northwest of Mosul. Ironically, that’s the town ISIS first captured on June 6, 2014, on its mission to take Mosul.

While the victory is something to celebrate, it is also bittersweet. ISIS has obliterated the large city into nothing. CNN continued:

Fawaz Gerges, a Middle East expert at the London School of Economics and Political Science, said that there was no time to waste in beginning social and physical reconstruction.

“The first challenge facing the Iraqi government and international organizations is to provide basic necessities of life for more than 400,000 Iraqis who have been displaced from the western part of Mosul, which mostly lies in ruins,” Gerges told CNN.

He estimated that rebuilding the Old City alone would cost $1 billion.

The terrorist group also ran out the citizens or captured them for slavery. Former residents have traveled back to Mosul to rebuild their lives. CNN reporters witnessed “signs of life returning to normal — traffic on the roads and chickens being sold in makeshift markets.”

The ISIS threat has not completely left Mosul or the surrounding towns. The terrorist group still holds Tal Afar, which is only 40 miles away from Mosul. From the BBC:

Forces from the Mosul battle are already being dispatched to Tal Afar to begin the clearance of that city. Covering less than one-eighth the surface area of Mosul, Tal Afar is a long-term stronghold of IS and may still require weeks or months of fighting to liberate.

Some 290km to the south-west of Mosul, IS also holds a string of towns in Anbar province along the Iraqi portion of the River Euphrates.

Collectively known as al-Qaim, these towns are closely connected to the remaining IS strongholds in the Euphrates valley in Syria, such as Raqqa and Deir al-Zour.

The BBC also mentions that ISIS has found a way back into places that forces drove them out of including “Diyala province, where Iranian-back militias have thrown fuel on the fire by undertaking collective punishment of the Sunni Arab community.”

This could cause problems in the future for future flare-ups or even lead to new terrorist groups. PBS reported back in March that the involvement of these militias have “already alienated some of the country’s Sunni population.” PBS continued:

Some of the Shia militias have a long record of sectarian abuses, and experts say renewed reports of detentions, disappearances, and in some cases summary executions of Sunnis by militia members, could one day result in another Sunni insurgency — like the one that led to ISIS’s rise.

Human Rights Watch had warned the coalition the Popular Mobilization Forces, the Badr Organization, and the Hezbollah Brigades should not take part in the operation to retake Mosul. PBS reported:

The report said Badr Organization and the Hezbollah Brigades allegedly detained and beat hundreds of Sunni men who were escaping from fighting in Fallujah. Dozens were reportedly executed, hundreds were disappeared and a dozen corpses were mutilated. Badr, the Hezbollah Brigades, Asaib Ahl al-Haq and other militias were also accused of detaining Sunni civilians without the authority to do so, and looting and destroying property. The alleged abuses, Human Rights Watch noted, followed similar allegations near other ISIS-held towns liberated with the help of Shia militias.

Abadi decided to “formally recognize the PMR as an ‘independent military formation’ in Iraq’s security forces” in 2016, but experts said that he “exerts very little control outside of Baghdad.”

Researcher Phillip Smyth at the University of Maryland stated that is because the fighters have an allegiance “to the leadership of their individual militias.”

Mary, why are you linking CNN, please?

Traditional journalist form requires that the original source be cited for their work. This is why everyone rushes to be “first” because, if it turns out to be a big deal, the work can be ravenously sourced to the benefit of author and company.

The author of this article is merely following journalistic standards as she should.

The only exception would be excerpting a specific opinion or analysis of a developing story, which would require that source, as opposed to an original report.

Now then, Iraq Army, let this be a lesson to you. Don’t run next time. Stand and fight. You can do that. If you don’t you’ll just have to re-take a place later, and it will cost more blood and treasure.

Learn from the Americans. Stand and fight.

Well, they certainly wouldnt learn it from the obamacans.
Had that idiot barack hussein not pulled out US troops after we defeated the other hussein, this war would never have been fought – and no good guys would be dead.

Thank goodness at least that GOP vote machine is back on the campaign trail.

Is the EPA still going to honor the contracts with companies hired to removed all of those red lines from the sand?

The Iraqi Army’s performance was pathetic in the beginning – but we should be honest with ourselves as to why that version of their army, which we has spent billions to build, failed so totally.

The answer was both simple and awful – we stood by while Iraqi PM Maliki destroyed the leadership from the top. He was an extremely paranoid man, so he eliminated ALL of the experienced senior leadership in the Iraqi Army at the time and replaced them with his own political cronies, most of whom had NO military experiences or skill.

Long story short, when Mosul was attacked by ISIS back in 2014, the military leaders appointed by Maliki panicked and fled back to Baghdad at the first shot. When the troops on the front line called to ask what their orders were, wondering how they should respond to the attack, they were told that the entire HQ staff had abandoned the city and were in full flight. And that there were no orders, it was every man for himself.

And that’s what allowed ISIS to take control of so much territory.